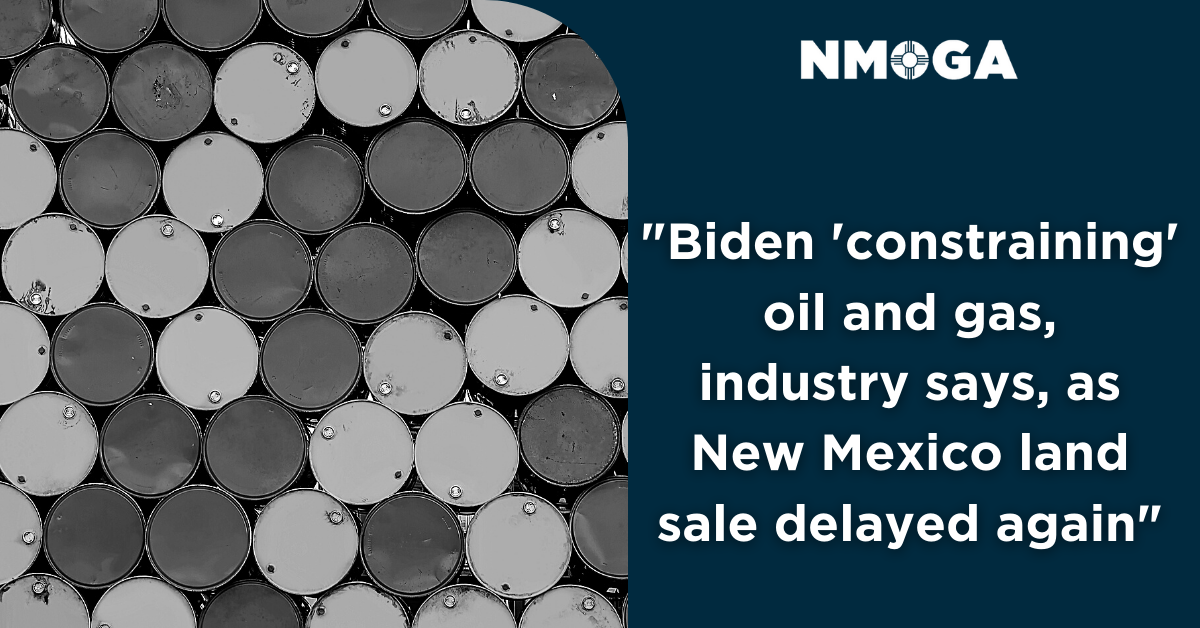 Oil and gas producers in New Mexico's Permian Basin will have to wait another week to rent more of the area for drilling, after a sale of public land to the oil and gas industry planned for Thursday was pushed back to June 30.

This was the second delay this month as federal land managers said they needed more time to conduct adequate environmental analysis for the sale originally scheduled for June 16.

Sales are held as auctions of leases of tracts of public land, lasting 10 years or as long as oil or gas is produced.

The postponements come after the sale was suspended for more than a year after President Joe Biden took office in January 2021 and his administration halted new federal oil and gas leases while the Department of the Interior sought reforms to its energy policies.

That pause was disavowed by a federal judge in Louisiana last year who filed an injunction, citing economic harm caused to energy-producing states by the pause, and ordered the Bureau of Land Management – and arm of the DOI – to resume leasing.

Last fall, the Department released its findings amid the moratorium, calling for stronger environmental analysis and higher royalty rates energy companies pay on operations on the leased land.

The DOI planned to temporarily institute the higher rates for new leases, but they’ve been delayed repeatedly in New Mexico and multiple western states, drawing criticism from the industry.

In its latest announcement of the schedule change, the BLM said the adjusting timetable was needed to complete analysis of the environmental impacts of oil and gas production on the lands offered in the sale: about 500 acres in Lea and Chaves counties within the nation’s busiest oilfield in the Permian Basin.

This was required, argued the BLM, under the National Environmental Policy Act (NEPA), a key federal law that governs how the government uses public land for a wide range of its activities.

“The date for this sale has shifted slightly to complete the analyses required under the National Environmental Policy Act and allow time for protest resolution,” read the BLM’s announcement.

More than half of New Mexico’s oil and gas operations occur on federal land, and the state is second in the nation in crude oil production, records show.

Revenue from that industry makes up more than a third of the State’s budget, and critics of the Biden administration argued the state was disproportionately impacted by federal restrictions.

Neighboring Texas, which shares the Permian Basin with New Mexico, mostly uses private land for its fossil fuel development which is not as impacted by changes to federal law.

The latest lease sale delay also pushed back sales in Wyoming and Colorado, and Sgamma argued Biden’s policies not only affected state economies, but drove up energy prices and left consumers across the U.S. suffering.

Nationally, gas prices hit a record of about $5.02 a gallon on June 14, a hike many argued was created by federal policy impeding American energy production.

“The president could help ease inflation by backing off these policies and even encouraging American production. However, we have seen few meaningful signs, other than rhetorical, that a reversal is in the cards.”

She said although the leases sales were ultimately planned for this month, the Biden administration already showed it was not supportive of oil and gas, by pushing for tax incentives for renewable energy and increased requirements for fossil fuel producers.

She also argued the sales were greatly reduced in size while costs were increased.

Sgamma pointed to an 80 percent reduction in the sales nationwide, compared to when they were originally planned in 2021, a reduction announced by the DOI following a revised analysis that shrunk the total land in the sales from 733,000 acres to 144,000 acres.

She said this reduction in land made available was followed by a 50 percent increase in cost tied to the temporarily-hiked royalty rates.

“The administration continues to show it is not serious about increasing production, reducing energy prices, and controlling inflation,” Sgamma said.

A study from economic nonprofit advocacy group Public Citizen, a frequent critic of oil and gas companies, argued the rate must be raised to give American taxpayers their “fair share” of revenue from oil and gas on public land.

The report showed the present royalty rate of about 12.5 percent paid on the value of produced allowed fossil fuel producers to make $5.8 billion in profits since 2013 that would have gone to the public if the rate was raised to the 18.75 percent proposed by the Biden administration.

That rate will be used during the upcoming sales but could not be permanent as the federal government has not yet begun a rulemaking process to set that rate in perpetuity.

About half of the royalties paid by the industry go back to states where oil is produced, records show, and Research Director Alan Zibel with Public Citizen said those states and the public should benefit the most from increased fuel demand tied to recovery from the COVID-19 pandemic.

“While gas prices spike at the pump, these oil and gas drillers are not only squeezing drivers, they are fleecing taxpayers as well,” said Alan Zibel, a research director at Public Citizen. “In a year of record oil profits and inflation, the oil and gas industry is taking advantage of unparalleled tax breaks, subsidies, and exemptions.

“At the very least, these companies should pay a fair price for the resources they extract from public lands and be forced to cover the cost of environmental cleanup without additional costs to taxpayers.”