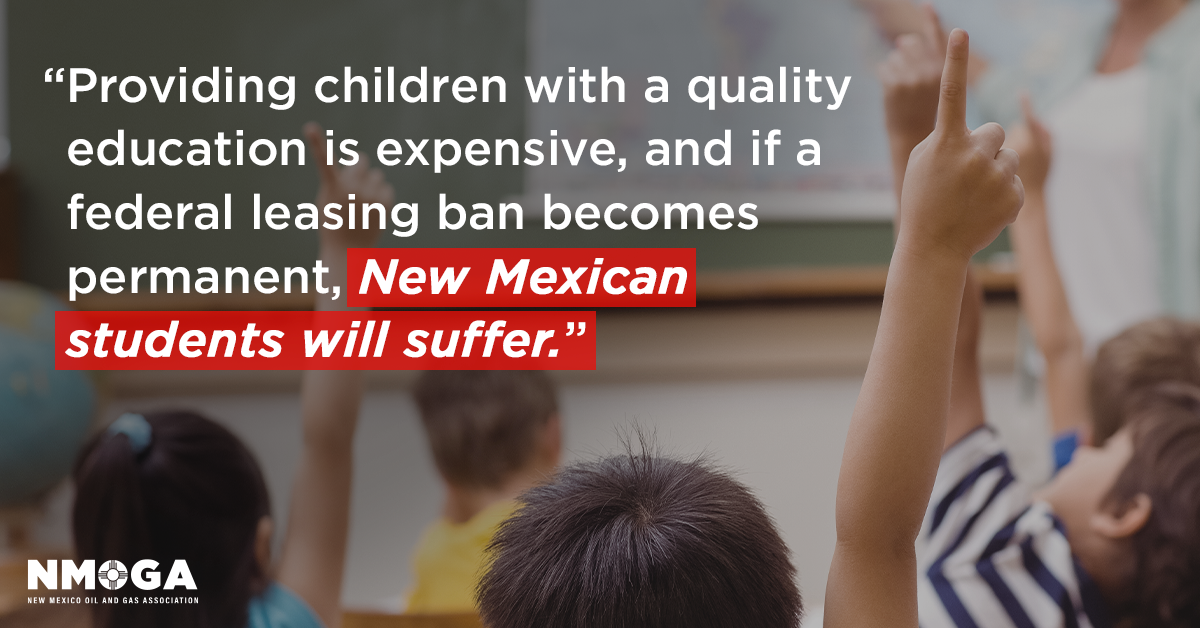 I am a strong advocate for natural gas and oil development on federal lands specifically because of the benefits it provides to New Mexico’s education system. Simply put, providing children with a quality education is expensive, and if a federal leasing ban becomes permanent, New Mexican students will suffer.

New Mexico spends an estimated $11,500 to $12,000 per child, and the state is actually on the lower end of the spectrum on per-child spending. Oil and gas in New Mexico have provided a critical $1.37 billion for education, accounting for over one third of the state’s education budget. That money helps support education-related expenses like teacher salaries, workforce benefits and developing curriculum.

Understandably, those who are familiar with these numbers were seriously concerned to see President Joe Biden announce a wide-ranging one-year moratorium on new oil and gas leases on U.S. lands and waters after taking office in January. Stan Rounds, executive director of the New Mexico Coalition of Educational Leaders, commented, “While you appreciate the green policies for environmental issues, you can’t strangulate the revenue streams in New Mexico.”

I respect those who have well-intentioned concerns about the impact federal leasing has on the environment. However, the federal leasing ban would actually have worse consequences for the fight on climate action, since N.M. residents and businesses would have to increase our coal consumption, which would result in increased emissions. According to a recent analysis conducted by the New Mexico Oil and Gas Association (NMOGA), oil and natural gas production and development on federal lands in New Mexico accounted for $1.5 billion in revenue and 18% of total state spending in fiscal 2020. Further, the Department of Interior notably distributed over $8 billion in tax revenue back to states from energy production on federal lands; New Mexico notably collected $706.96 million in fiscal 2020, more than any other state in the nation. For those of us working in public education, this tax revenue is critical for our livelihoods.

If this ban becomes permanent, it is hard to imagine how our state will find a new source of revenue to replace these funds. Short of a replacement or large increases in taxes, the state will inevitably need to make cuts to budgets. State Rep. Patricia Lundstrom, D-Gallup and chair of the House Appropriations & Finance Committee, bluntly stated, “We’re not a wealthy state. We have to stretch every dollar.” On top of serious, valid concerns about balancing a state budget following such a loss, it is critical to not ignore the ongoing COVID-19 pandemic and its impact on the state, before moving forward with a final decision on a permanent leasing ban.

The rapid shift to remote and hybrid learning has had devastating impacts on today’s students. Despite educators, teachers and students’ best efforts, learning loss is being recorded in staggering numbers. In fact, McKinsey & Company concluded that by the end of June, American students could lose an average of five to nine months of learning. Now more than ever, education needs more funding, not less. Additionally, Congresswoman Yvette Herrell, R-N.M., has pointed out this ban would cost our state over 60,000 jobs by 2022, assuredly affecting the livelihoods of many of our students’ households.

Equally worrisome to me is the prospect that the United States will have to rely on foreign countries to supply our fuel needs, particularly countries like Russia and others in the Middle East with inferior standards for environmental stewardship. In education, we teach our students to respect the environment, make informed decisions, honor standards set forth to maintain integrity of processes and respect the rule of law. But it’s hypocritical for the United States to depend on foreign countries for energy imports as a consequence of this federal leasing ban when we we’re also importing their comparatively lax standards for these issues.

I am profoundly invested in this issue as a teacher for Rio Rancho Public Schools and, more importantly, a mother of four children currently enrolled in the New Mexico public school system. I do not want to see a lack of funding prevent them, or any child, from achieving their full potential. I strongly encourage President Biden to reconsider his damaging decision and allow federal leasing to continue for the benefit of our state’s children and teachers. Should President Biden fail to do so, I would plead to Gov. Michelle Lujan Grisham to ask the federal government for an exemption for New Mexico from this leasing ban, as she has previously pledged. She has a responsibility to her constituents to support policies with their best interests at heart.