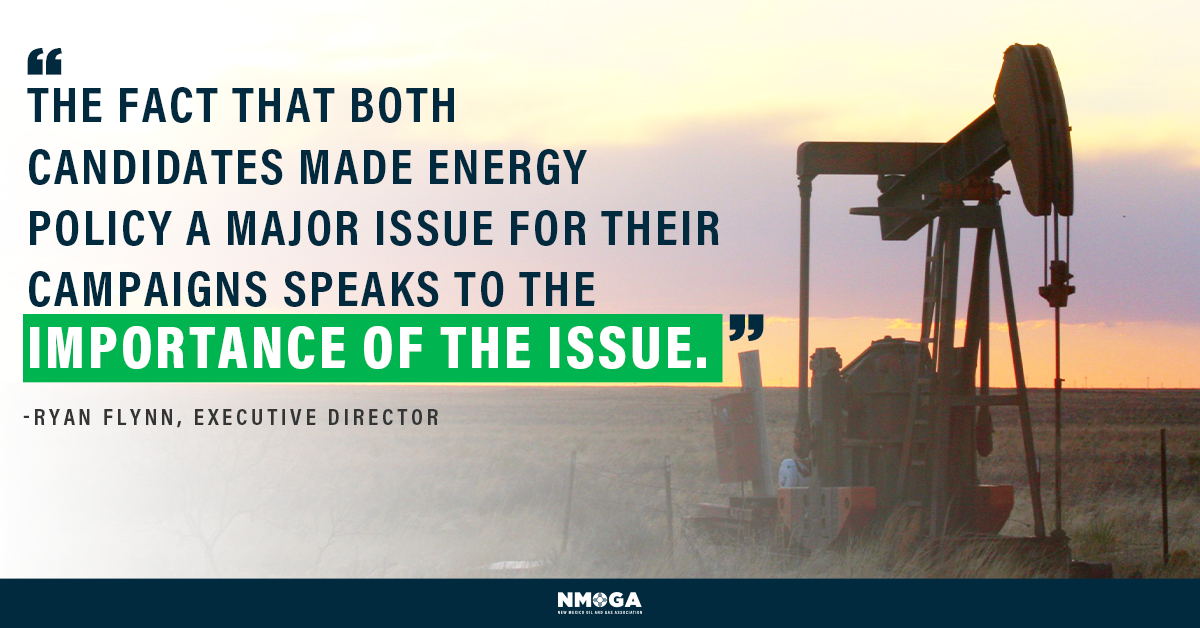 In the wake of the 2020 Presidential Election and the nation’s apparent selection of former-Vice President Joe Biden as the U.S.’ 46th President, many in southeast New Mexico and the oil and gas industry were concerned about a shift in the national energy policy.

Along the campaign trail, Biden was believed to have voiced support for policy actions such as an outright ban on new hydraulic fracturing activities or on oil and gas leasing on federal land.

Republicans accused Democrats of aiming to shut down the oil and gas industry – a main economic driver in New Mexico – in favor of a transition from fossil fuels to an era of renewable energy.

Carlsbad Mayor Dale Janway said that while various lawsuits regarding the election could continue to put its results into question, the Biden administration’s possible curbing of fossil fuel development was troubling to communities in the Permian Basin.

“As we’ve mentioned in the past, a federal ban on fracking on public land would destroy New Mexico’s economy while doing nothing to protect the environment. New Mexico’s educational system can’t afford a setback such as this, which would greatly reduce funding,” Janway said.

“Several misguided attempts to ban fracking at the state level have been stopped, and we will continue to help resist them wherever it becomes necessary. Many of us are closely following the various recounts and lawsuits taking place across the country and believe the process of the presidential election is still ongoing at this time.”

Eddy County Manager Al Davis said the county was also awaiting the results of the Republican Party's challenges of the election results, but worried that efforts by Democrats and environmental groups at the state and federal level to restrict oil and gas operations could threaten the local and statewide economy.

"The objectives purported by these groups advocating for changes are well intended, but seem somewhat short sighted in terms of what the cost to an individual tax payer will be when those individuals are asked to bear the burden of a reduced influence from oil and gas activity in southeast New Mexico," Davis said.

"From my perspective efforts to support the oil and gas activity in New Mexico should continue to be higher priorities than many others that I’ve observed that are getting some visibility on the legislative front."

Davis argued that the oil and gas industry is already heavily taxed at about 33 percent of revenues, and that policymakers should embrace the industry for the benefit of the nation and survival of southeast New Mexico.

"What we do understand is that there are efforts in motion with current State regulations and some agendas that have been represented through State and Federal legislators that make doing business in southeast New Mexico for industries like oil and gas more and more difficult and less and less attractive for committing investment dollars," Davis said.

"What many of those groups fail to recognize is what are the ultimate costs to implement their agendas? Who will pay for those costs, while they disregard the lost revenue and tax support that would result from a diminishing oil and gas industry in southeast New Mexico?"

The proposed ban on new oil and gas leases on federal land would impact New Mexico disproportionately, per a study from the New Mexico Oil and Gas Association, but Executive Director Ryan Flynn said the industry is willing and ready to engage in discussions on such policy with the Biden administration.

He said he was “optimistic” about oil and gas’ future in New Mexico and the U.S., regardless of who was in the White House.

“The fact that both candidates made energy policy a major issue for their campaigns speaks to the importance of the issue. Our job is to work with policy makers,” Flynn said.

“Whether it’s about a federal ban on leasing or some of the other policies that would make development difficult, we will be engaging in these discussions and continue advocating for our industry.”

The study published by NMOGA in September reported a ban on oil and gas leasing on federal land – where a large portion of New Mexico’s oil and gas development occurs – could cost New Mexico 62,000 jobs by 2022 while also risking up to $1 billion in state revenue from the industry that makes up 40 percent of New Mexico’s budget.

“There policy decisions affect every single New Mexican,” Flynn said. “Energy policy was a huge part of the Presidential campaign and we’re ready to work with President-elect Biden. My takeaway from the election is there is a need for problem solvers. Our industry is full of problem solvers.”

As for New Mexico’s shift to renewables, which was supported by Gov. Michelle Lujan Grisham since she took office in 2019 and signed the Energy Transition Act into law, Flynn said the state and nation should have a “diverse” energy portfolio including renewables and oil and gas side by side.

“A diverse portfolio provides a reliable source of energy,” he said. “What people say on the campaign trail, what we’ve seen is leaders evolve when they get in and understand the impacts of different sectors. Our sector is essential and a big part of our country moving forward.”

The idea that Democrats and others seek to end oil and gas production is “not grounded in reality,” Flynn said.

“Anytime there is a change in power, people have concerns about the policy implications,” he said. “Our industry has continued to evolve and we’re not going anywhere for decades to come.”

Tom Kiernan, chief executive officer of the American Wind Energy Association said the industry planned to work with the Biden administration to pursue a goal of 100 percent carbon-free energy by the middle of the century.

Wind energy is one of New Mexico’s fast-growing energy sectors, with nine active leases with a capacity of 345 megawatts for wind projects on State Trust land and 19 pending applications to add 1,835 megawatts in the coming years, per data from the New Mexico State Land Office.

The Land Office also reported six active leases for 221 megawatts for solar projects in the state, with 27 lease applications being processed to add 2,917 megawatts.

“The President-elect and his team have laid out an ambitious, comprehensive approach to energy policy that recognizes renewable energy’s ability to grow America’s economy and create a cleaner environment, while keeping electricity costs low and combating the threat of climate change,” Kiernan said.