BLM cancels oil and gas leases for second quarter of 2021 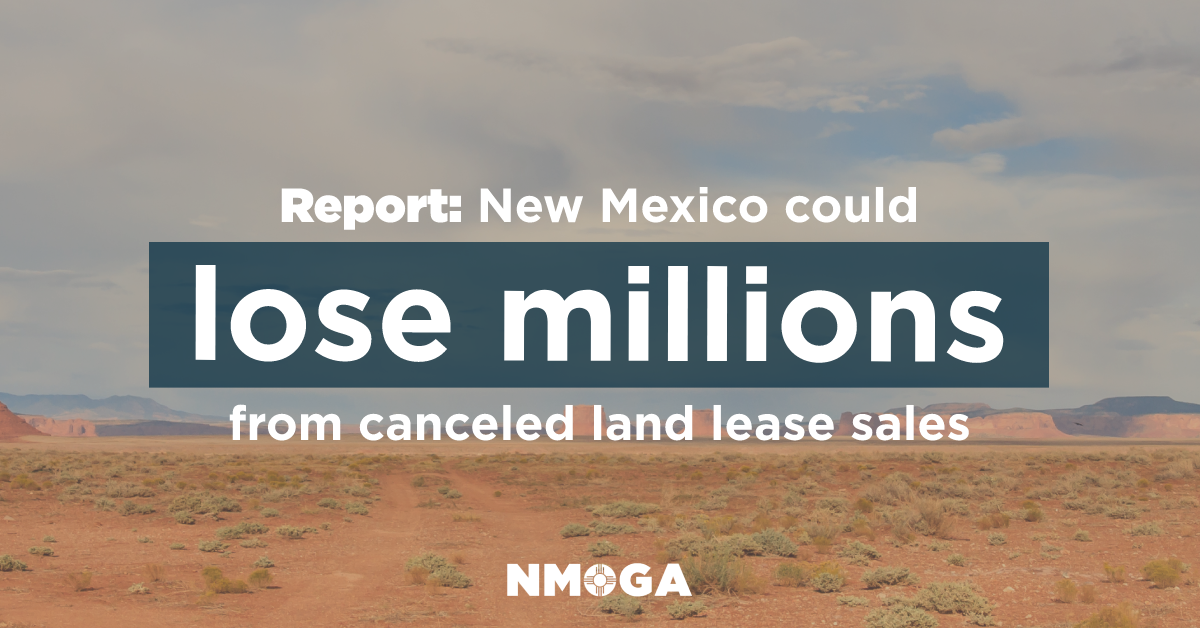 Without sales of New Mexico federal land to the oil and gas industry, the state could lose out on millions of dollars in revenue every year.

The Bureau of Land Management, a sub-agency of the U.S. Department of the Interior, announced it would not hold any oil and gas land lease sales during the second quarter of 2021 as the DOI was amidst a review and potential overall of the federal government’s oil and gas program.

Finalization of a January lease sale in New Mexico was postponed, while the April sale was cancelled and the planned July sale was listed as paused, per the BLM’s online register.

The register listed a potential sale in October, but no documentation was available as of Tuesday.

In a statement from the BLM, it contended the pause on lease sales would allow the agency that manages federal lands throughout the American West to review its policies and ensure they align with the agenda of the administration of President Joe Biden, who took office in January, in addressing pollution from fossil fuels.

“Based on our ongoing review, the Bureau of Land Management is exercising its discretion to not hold lease sales in the 2nd quarter of Calendar Year 2021. This decision does not impact existing operations or permits for valid, existing leases, which continue to be reviewed and approved,” the statement read.

"The BLM remains committed to managing our programs in a way that restores balance on public lands, creates jobs, and provides a path to align the management of America's public lands with our nation's climate, conservation, and clean energy priorities."

In New Mexico, BLM lease sales of public land to the oil and gas industry brought in millions of dollars every year since 2016 during the term of former-President Donald Trump who pledged an agenda of “American Energy Dominance” in seeking to open more lands to drilling and stripping environmental regulations on oil and gas operations.

States that host leases receive 48 percent of the sales.

That meant after a single lease sale in 2016, New Mexico brought in about $70 million in September of that year.

The state’s total revenue from sales in 2017 was about $79 million.

In 2018, the BLM held a record-breaking lease sale that netted about $972.5 million in New Mexico, meaning the state received about $466.8 million.

The 2016 sale was the subject of an ongoing lawsuit along with and another from December 2018, the results of which were not available online.

Sales dipped slightly in 2019, with New Mexico bringing in about $21.9 million from four sales that year and another $15.2 million in 2020, BLM records show.

The pause on lease sales enacted by Biden and the DOI during the first weeks of his term meant no revenue was gained, records show, from sales in 2021.

The BLM contended the Trump administration conducted a “fire sale” by offering more land to leases than was needed, and that the ongoing review could ensure taxpayers get a fair return for the sale of public lands to oil companies.

Under the Trump administration, BLM records show more than 25 million acres were offered nationwide with only 5.6 million acres purchased.

A report from Rocky Mountain Wild, a Colorado-based non-profit, showed 4.3 million acres in New Mexico were currently leased with 1.1 million acres leases but not developed.

The present administration also implied its predecessor could have violated environmental review laws in issuing leases during the previous term.

“In recent years, courts have found the current leasing process in violation of various governing laws, invalidating both the BLM’s guidance and a number of lease sales,” the statement read.

New Mexico fossil fuel industry groups condemned the Biden administration for disrupting oil and gas production in the state, an industry that generates more than a third of the state budget while half of operations are on federal land subject to the BLM’s actions.

An analysis from the American Petroleum Association showed a halt on federal leasing could cost the state 62,000 jobs by 2022 while risking up to $1.1 billion in annual revenue and decreasing the state’s oil production by 47 percent.

Environmental groups championed the leasing pause as action needed to protect the environment from the impacts of fossil fuel development.

Through the years, such groups submitted thousands of public protest comments to the BLM for lease sales and argued that the oil and gas industry and its supporters exaggerated the impact the temporary pause would have.

“Any talk that cancelling these lease sales is going to devastate the industry further is more smoke and mirrors,” said Mark Allison, executive director with the New Mexico Wilderness Alliance.

“The Trump administration sold out New Mexico taxpayers by leasing as much land as it could, often below market value, before voters chose a different path.”