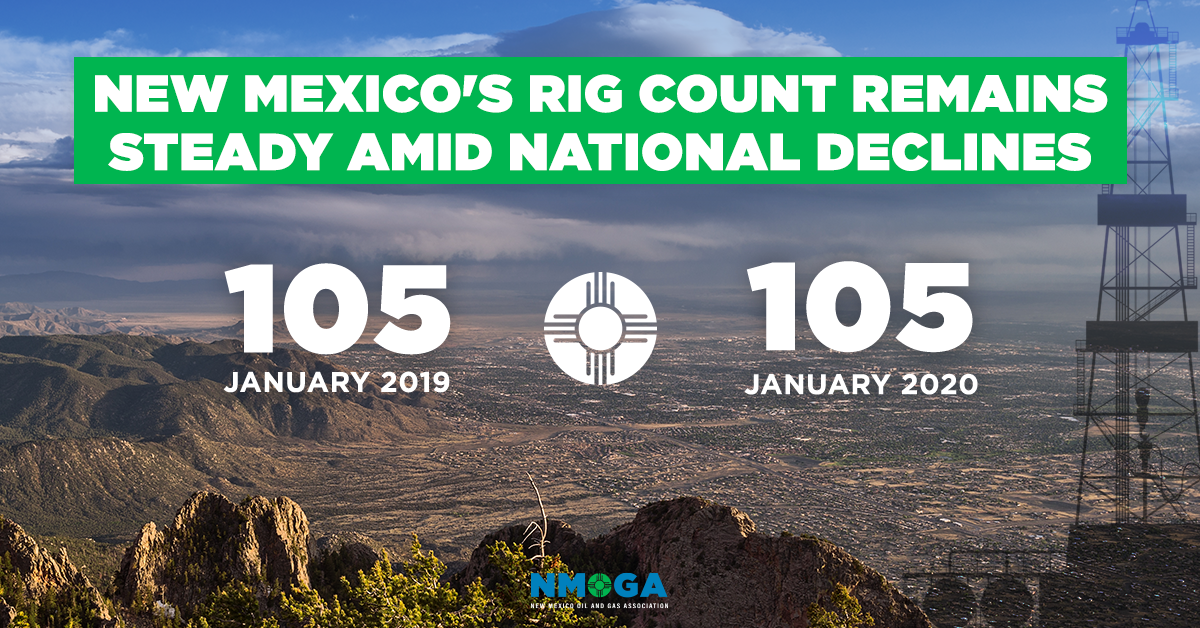 New Mexico only lost one oil and gas rig in 2019, despite significant losses in the Permian Basin and neighboring Texas.

Texas and New Mexico share the Permian, considered to be the U.S.’ most active oilfield, to the east in New Mexico and the west in Texas.

But despite the Permian leading the nation with 403 rigs as of Jan. 3, per data from Baker Hughes, it lost 85 rigs in the last year – also the most among major oil-producing basins in the U.S.

Meanwhile, New Mexico was at 104 rigs, with most of them in Permian, down just one from 105 a year ago, records show.

While Texas lead the nation in rig count by state and the Permian by basin, both showed the highest declines between 2019 and the start of 2020.

The Cana Woodford Basin in western Oklahoma was second in rig-count loss, dropping from 59 to 39, followed by Pennsylvania’s Marcellus Basin which went from 57 rigs a year ago to 40 as of Dec. 3.

Oklahoma as a state lost the second most rigs in the last year, down 89 from a total of 140 at the start of 2019 to the most recent rig county of 51, putting New Mexico in second place with its total rig count of 104.

And Pennsylvania was third in rig count loss, dropping from 47 a year a go to Jan. 3’s total of 24.

North Dakota remained steady like New Mexico, losing just three rigs in the last year to the most recent total of 50.

New Mexico was at last year’s total of 105 last week but dropped one rig since.

Robert McEntyre, spokesman for the New Mexico Oil and Gas Association credited New Mexico’s stability to a favorable regulatory environment and low cost of doing business, along with an apparent abundance of oil and gas resources.

“These higher prices affect other basins more than the Permian because of the low cost of entry (into the Permian),” McEntyre said. “If you look at other projects, the break-even point is going to be much higher than in the Permian.

“The U.S. is becoming the biggest oil producer in the world. New Mexico and the Permian are driving that change.”

He said the Delaware Basin on the western side of the Permian, where the U.S. Geological Survey (USGS) announced its discovery of the “largest continual resource” for oil and gas ever in November 2018, continued to entice investments from energy producers in southeast New Mexico.

“The Delaware still remains an attractive opportunity for companies around the world,” McEntyre said. “That’s why we’re seeing rigs hold steady in the 100s. You’re seeing investment and development in the Carlsbad area.”

McEntyre said the stability was encouraging that the oil and gas industry in New Mexico was continuing as a national leader.

He said as American oil was priced in the upper $50s and low $60s in recent weeks, investments could grow and focus on New Mexico and the Permian Basin.

“One hundred is a real significant number for New Mexico,” he said. “There are probably few areas in the country that have that many rigs in such a small area. We’re going to see investment in the places that show the most return. That is the Delaware Basin.”

And with the New Mexico Legislature going into its annual session this month, McEntyre cautioned against policy changes that could impact the growth of the state’s oil and gas sector.

“The number-one impediment to this growth and those records are changes on the policy side,” he said. “Given other tensions abroad, I think it’s clear its better to have our energy made here rather than relying on other parts of the world.”