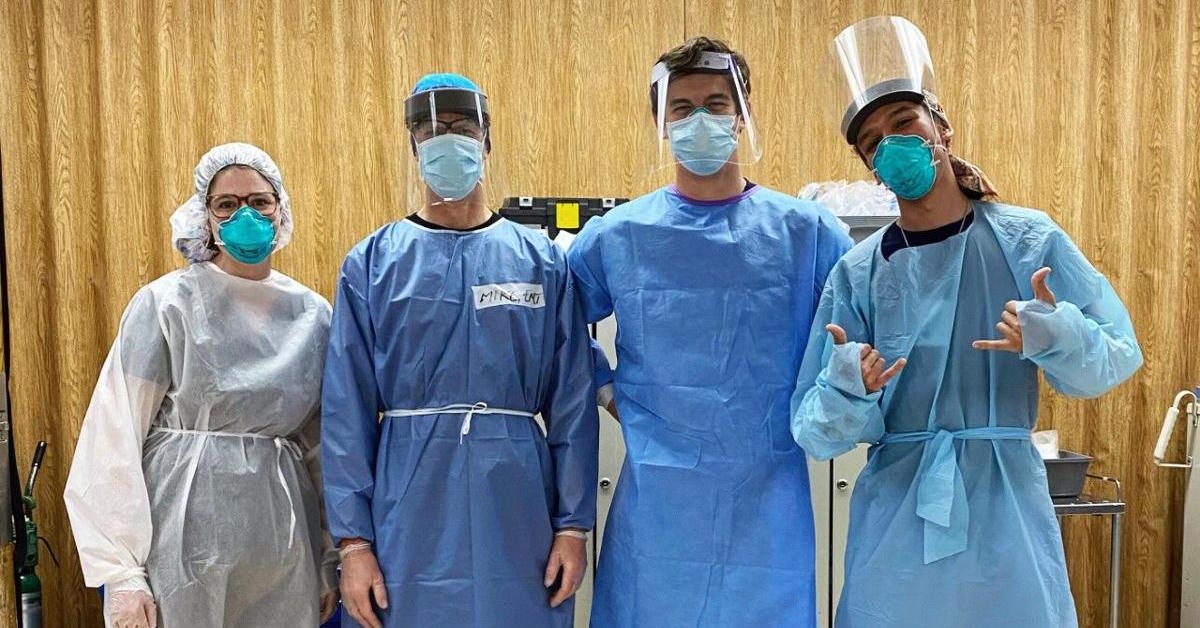 Death is part of any emergency room, but the wave of COVID-19 fatalities a Santa Fe nurse dealt with in a New York City hospital could be overwhelming at times.

Because of strict precautions, these patients were unable to say goodbye to loved ones in person before they died, which made their deaths sadder and more desolate.

“That’s really upsetting to see,” said Alexandra Gary, 26, an emergency care nurse at Christus St. Vincent Regional Medical Center. “When they’re short of breath, just the look in their eyes is really sad. It’s something that you won’t forget.”

The organization’s main mission is to medically assist developing countries. But it sponsored a volunteer program to supply 1,500 nurses, medics, and other emergency personnel to hospitals in New York City and Chicago, two of the nation’s worst hot spots for COVID-19, the respiratory disease caused by the novel coronavirus.

The program was a way to offer immediate assistance to what is certain to be a long-term problem, said Dr. Andrew Lustig, GoDocs’ president and founder.

“We are in for a long-term, multiyear pandemic with this virus and others like it,” Lustig said. “We will see additional acute epicenters in the next year or two.”

More than 30,000 New York residents have died of COVID-19, according to a New York Times tracker. Illinois has recorded more than 6,400 deaths.

Gary said she decided to volunteer when Christus was in a lull. Being in emergency care, she wasn’t among the 300 employees who were furloughed in mid-April. It was simply a good time to help where it was needed, she said.

She arrived at the New York hospital just after the peak of the outbreak. But the daily flow of COVID-19 patients was still intense, and staffing was often short because nurses got sick, she said.

She found the sheer number of patients the most challenging part of the job, especially because it meant facing a higher death toll every shift.

“To see so many patients coming in that were as critical as they were — you can be overwhelmed by that,” Gary said. “It’s always hard to see someone dying.”

Because of the high volume, the infected patients could not be properly isolated to keep the virus contained, resulting in the entire hospital being deemed contaminated, Gary said.

Fortunately, GoDocs supplied ample personal protective equipment, so staffers weren’t grappling with the shortages common at other hospitals in the city, she said.

Most of the patients who went to intensive care were older than 60 with underlying health conditions, but some were much younger, Gary said.

That’s why younger people should not be complacent and think they can gather in large groups with no precautions, she said. People don’t know how the virus will affect them or how devastating it can be until it’s too late, she said.

And those infected can spread it to older, more vulnerable people, Gary said.

Truong said she also encountered patients in a range of ages, from geriatric to pediatric.

Truong worked with a team in a tent outside the hospital where patients with COVID-19 symptoms were diagnosed.

Waukegan, a Chicago suburb, is a poorer area where many residents have high blood pressure, diabetes and other preexisting conditions that can exacerbate coronavirus infections, Truong said.

That led to a steady stream of COVID-19 patients going through the hospital, and as many as 13 patients at a time being treated in the tent, she said.

“It was pretty stressful,” Truong said. “But with the help of the staff, it wasn’t as stressful as I expected.”

The most unusual COVID-19 case she recalled was a man suffering from extreme hypoxia — low oxygen in his tissues — walking around and talking. Typically patients in this condition are unconscious and don’t come to the tent, she said.

She had to respond swiftly and get the man to critical care because the tent wasn’t equipped to intubate patients. And hypoxic patients must get oxygen at once or they can deteriorate quickly, she said.

“It was scary,” Truong said.

One lesson she took away from the experience was how well the hospital set up a system for accommodating a higher volume of patients, Truong said. The staffers were well-coordinated and ready to respond to anything they might encounter.

Gary said she was impressed with the full-time nurses who are dealing with high stress and death week after week. They get worn down at times but bounce back and keep going, she said.

She hopes if New Mexico ever gets a huge surge in cases, she’ll be that resilient.

Santa Fe residents have been good at following precautions such as wearing face masks and practicing social distancing, which has curbed the virus’s spread. It’s important that they don’t let up too soon, otherwise, the area could get a much worse outbreak that strains the medical system, she said.

“If people want to support those on the front line, that’s the best way they can do it,” Gary said.