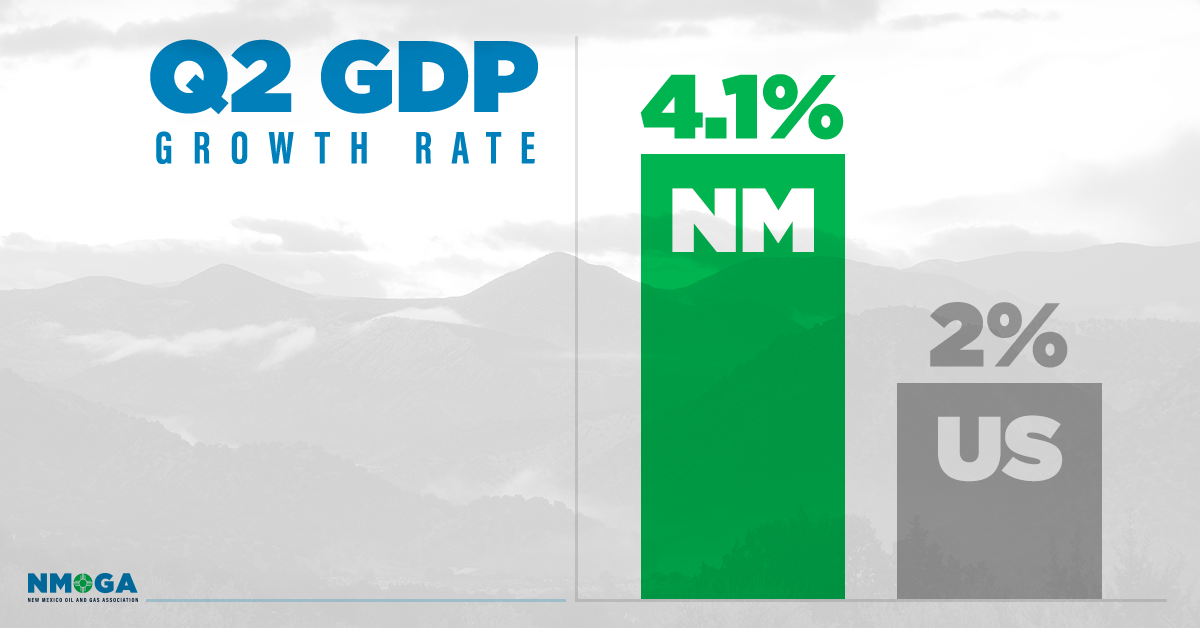 Oil and gas production grew New Mexico’s economic output by the fourth-highest rate in the country this year, as the extraction industry boomed in the Permian Basin in the southeast corner of the state.

A report from the Bureau of Economic Analysis (BEA), an arm of the U.S. Department of Commerce, showed New Mexico’s gross domestic product (GDP) grew by 4.1 percent in the second quarter of 2019, tied with Alaska and behind Texas at 4.7 percent and Wyoming at 4.2 percent.

Nationwide, GDP grew by 2 percent, records show, and New Mexico also grew by 4.1 percent during the first quarter of 2019.

That marked an increase from 2018’s 2.5 percent in total growth, showing increases of 0.7 percent and 5.5 percent in the first and second quarters, respectively.

Mining, quarrying and oil and gas extraction was the state’s largest growth area, contributing by about 2.2 percent to New Mexico’s overall GDP growth, while it only contributed about 0.33 percent across the U.S.

New Mexico’s extraction industry made the second biggest contribution to the state’s GDP, behind Wyoming’s 3.5 percent and ahead of Texas’ 1.8 percent, per the report.

North Dakota was fourth with its extraction industry adding 1.7 percent to its GDP growth, per the report.

But the report credited oil and gas as driving most of the GDP growth in New Mexico and the country.

“The second quarter growth primarily reflected an increase in oil and gas extraction,” the report read.

WTI was trading at about $57 per barrel as of Tuesday, per data from NASDAQ, up from a slump in October when prices were as low as $52 per barrel.

The boom also lifted New Mexico to have the second-highest rig count in the country with 104 rigs as of Friday per a report from Baker Hughes, down four in the last week and two in the last year.

“With this kind of steady, upward movement we’re entering a new era in southeast New Mexico and the Permian, where production will remain at record highs as long policy remains stable,” he said.

Although prices did struggle to cross the $60-per-barrel mark throughout 2019, Flynn said New Mexico’s Permian Basin remained attractive for the low costs of operations.

“Even when we saw prices decline, production remained high,” Flynn said. “For the state, that’s good news. Revenue from the industry should remain really high.”

The U.S.’ economic growth and subsequent market optimism was credited with the growth in prices, per a report from Enverus, formerly Drillinginfo.

The market was further supported by the expected confirmation of a trade deal between the U.S. and China, which were recently embroiled in a “trade war” with each nation imposing tariffs on goods imported by the other.

But a report from the Organization of Petroleum Exporting Countries (OPEC) suggested a glut in supply from non-OPEC countries led by the U.S. could overtake the demand and lead to market declines in the next five years.

“The optimism early in the week was muted by the inventory release on Wednesday with the large gains in crude,” read the report. “This capped the gains from early in the week, but prices recovered most of the declines by the end of trade on Friday, in spite of the bullish recovery of the US dollar during the week.”

While prices stayed in the $53 to $57 range, the report pointed to a shift to the higher end of the range but cautioned that delays in the U.S.-China trade deal could push WTI back down to the lower $50s.

“It was this moving average zone that limited last week’s gains and where sellers were found,” the report read.

“Bearish input from concerns about the global economy or hold-ups in the US/China trade deal could bring another test at the low end of the range at $53, which will likely find buyers.”