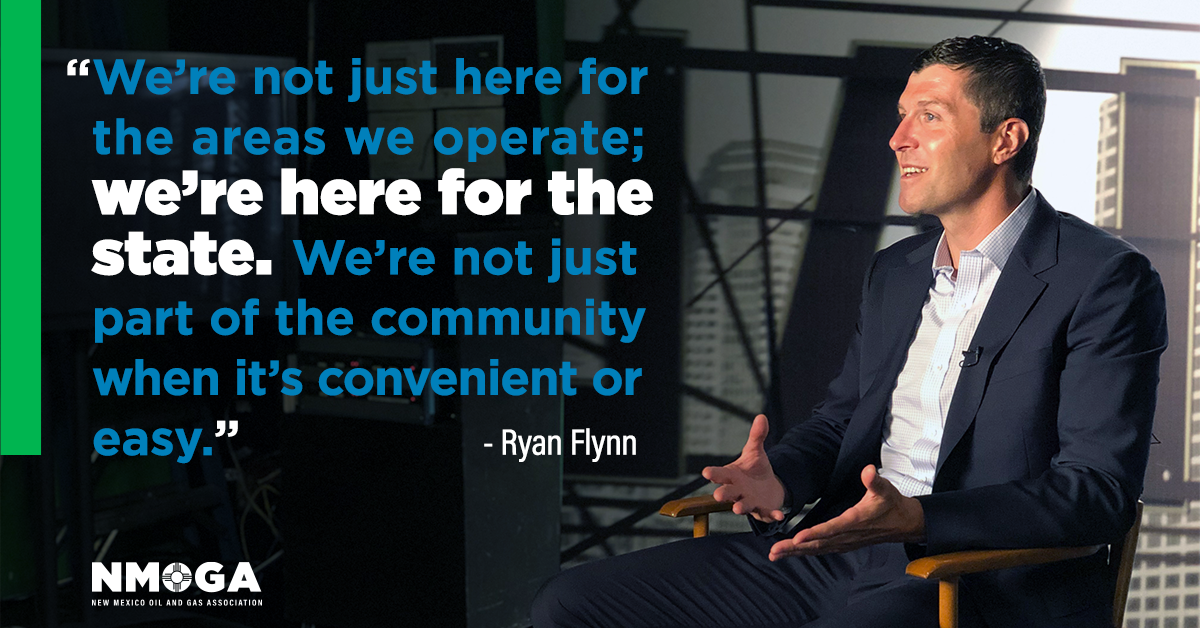 Even as the price of oil has dropped dramatically because of COVID-19, the organization that represents the oil and gas industry in New Mexico is contributing $50,000 to organizations in Las Cruces and across the state to fight hunger and increase food security during the public health crisis.

“We’re not just here for the areas we operate; we’re here for the state. We’re not just part of the community when it’s convenient or easy,” Flynn said. “It’s more important than ever to find ways to participate. It’s really what we’re about. it’s who we are. It’s what we do.”

“The prices of oil have collapsed over the last month,” he said. “Everything is driven by the COVID-19 pandemic.”

Three months ago, Flynn said, the price of a barrel of oil was in the high $50s and low $60s. In early March, it had dropped to the mid-$40s, he said, “and things were not looking good. We’d love to be back in the mid-40s right now.” Oil is currently at $27 a barrel, which Flynn said is an improvement over the first week in April, when prices dipped into the teens.

“All roads lead back to the demand perspective,” he said. Because of the health crisis, “people aren’t driving, aren’t flying.”

The only “silver lining,” he said, is that the drop in demand has reduced the impact of the Saudi-Russia feud over oil prices.

Without the pandemic, that feud “would be having significant impact on global energy markets,” Flynn said. “The fact that the market is very well supplied, and demand has been dramatically reduced by the pandemic, really kind of tempered the impact.”

Even if Russia and Saudi Arabia agreed on oil production levels, “that’s not going to move prices,” Flynn said. “Really, to get back into a healthy price point where the industry is able to survive in the long-term and consumers are not feeling the pinch, we just need to start traveling.”

The drop in oil prices could be especially serious for New Mexico, where 39 percent of the state’s general-fund revenue came from oil and gas production last fiscal year, Flynn said, and that doesn’t include related gross-receipts tax payments and royalties.

Sen. John Arthur Smith, D-Luna, Hidalgo, Sierra, Doña Ana, chair of the New Mexico Senate Finance Committee, said he recommended to Gov. Michelle Lujan Grisham in late March that a special legislative session be held in late June or in July to deal with the budget crisis initiated by the collapse of oil prices.

“It’s amazing to me how relatively swift the response (to COVID-19) has been, certainly here in New Mexico,” Flynn said. “That’s a good thing. The governor has done a really good job of getting on top of this and moving quickly.”

The oil and gas industry’s recovery from the crisis “will be slow,” Ryan said. “The return to normalcy will be much more gradual.”

The good news, he said, is that New Mexico will continue to benefit from its location.

“The Permian Basin is the most important place to produce oil in the U.S.,” he said. “It’s the epicenter of the American oil industry. We will emerge from this, prices will rebound. Demand will rebound. We will recover.”

New Mexico ranks third in annual oil production and eighth in natural-gas production among all states, according to www.nmoga.org. The Permian Basin covers more than 86,000 square miles in southeast New Mexico and southwest Texas. NMOGA has more than 900 members.

“It’s a price war is all it is,” Flynn said about the feud that began in March between Russia and Saudi Arabia.

The U.S. has become the world’s largest producer of oil, followed by Saudi Arabia and Russia. Collectively, the three countries “produce the overwhelming lion’s share” of oil globally, he said. “American energy production is eating into the market share that the Russians and the Saudis have enjoyed,” Flynn said, and the feud originated because Russia felt that it rather than OPEC (which includes Saudi Arabia) had been holding the line on oil production to keep supplies and prices stable. “The Russians approached the Saudis and said they were not willing to do that anymore,” he said.

Saudi Arabia surprised the Russians when it “totally went in the opposite direction” by increasing production, Flynn said, which it can do more cheaply than both the U.S. and Russia. A price war “between two major global commodity producers” resulted.

"It's exciting to be included in this funding by the NMOGA,” said Lorenzo Alba, executive director of CdP, which received a $5,000 award from NMOGA to reduce hunger in Doña Ana County. “The timing is impeccable, as we are facing difficult times in this COVID-19 crisis,” Alba said. “We are certainly grateful and humbled by this grant. "We are looking forward to a fruitful partnership with NMOGA."

NMOGA prioritized food banks for funding because of COVID-19, an association news release said. The organizations receiving money serve 15 counties that represent about 70 percent of the state’s population.

The awards are the second installment of a $200,000 NMOGA commitment this year to education, economic opportunity and food security statewide, NMOGA said.

To donate to Casa de Peregrinos, visit www.casadeperegrinos.org. A $20 donation pays for 120 meals.