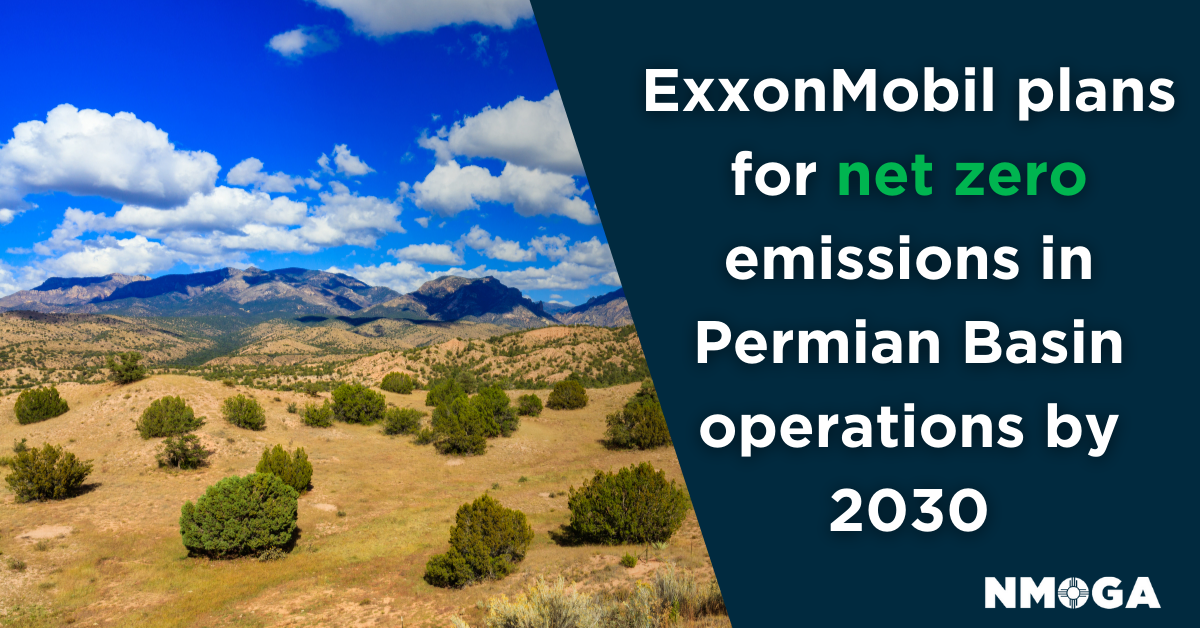 IRVING, Texas – ExxonMobil said today it plans to achieve net zero greenhouse gas emissions from operated assets in the U.S. Permian Basin by 2030, accelerating and expanding its emission-reduction plans for unconventional operations in New Mexico and Texas. The plans are part of the corporate-wide effort to reduce Upstream greenhouse gas emissions intensity by 40-50% by 2030, compared to 2016 levels.

“Our groundbreaking plans to reach net zero for Permian Basin operations further demonstrate our commitment and support of society’s ambitions for a lower-emissions future,” said Darren Woods, chairman and chief executive officer. “We have plans to reduce greenhouse gas emissions intensity across our businesses by deploying the capabilities and technical strengths that are foundational to ExxonMobil.”

The greenhouse gas emission-reduction efforts in the Permian will be supported by electrifying operations, continuing investments in methane mitigation and detection technology, eliminating routine flaring, upgrading equipment, and employing emissions offset technology, which may include nature-based solutions.

The company plans to electrify its operations with low-carbon power, which may include wind, solar, hydrogen, natural gas with carbon capture and storage, or other emerging technologies. ExxonMobil plans to expand its methane detection programs utilizing satellite surveillance and a network of ground-based sensors for continuous monitoring, and aerial flyovers that identify leaks for rapid repairs.

By year-end 2021, ExxonMobil anticipates reduced flaring volumes across its Permian Basin operations by more than 75% compared to 2019. The company plans to eliminate all routine flaring in the Permian by year-end 2022, in support of the World Bank’s Zero Routine Flaring initiative. The company is also securing alternative natural gas delivery points across the basin to minimize non-routine flaring.

“Our goal of net zero for Scope 1 and Scope 2 greenhouse gas emissions is one of the most ambitious and wide-reaching in the Permian Basin,” said Bart Cahir, senior vice president of unconventional at ExxonMobil. “Throughout the value chain, our people are working hard to help reduce the greenhouse gas emissions associated with the products that enable modern life.”

Plans for the Permian Basin further support ExxonMobil’s corporate methane reduction objectives and are aligned with the U.S. and European Union-led Global Methane Pledge to reduce methane emissions by 30% by 2030.

To validate its emissions-reduction efforts, ExxonMobil is working with an independent validator, non-profit MIQ through a pilot program initially focused on Poker Lake facilities in New Mexico. Through the program, natural gas will be certified based on a series of factors including methane intensity and will be marketed to customers early next year. The certification process could be expanded to other production areas based on demand.

ExxonMobil’s 2030 net zero goal for the Permian Basin will require the support of well-designed policies and advances in technology that increase availability and reliability of carbon-neutral power in the region, including wind and solar. Through long-term purchase contracts, the company supports the development of wind and solar power generation.

At the end of the third quarter 2021, ExxonMobil reported producing an average of 500,000 barrels of oil equivalent per day from its unconventional assets in the Permian Basin, accounting for more than 40% of the company’s U.S. net production. As production increases in the Permian, greenhouse gas emissions are expected to be mitigated accordingly. Costs associated with lower-emissions technology are included in the corporate plan through 2027, which was announced earlier this month.