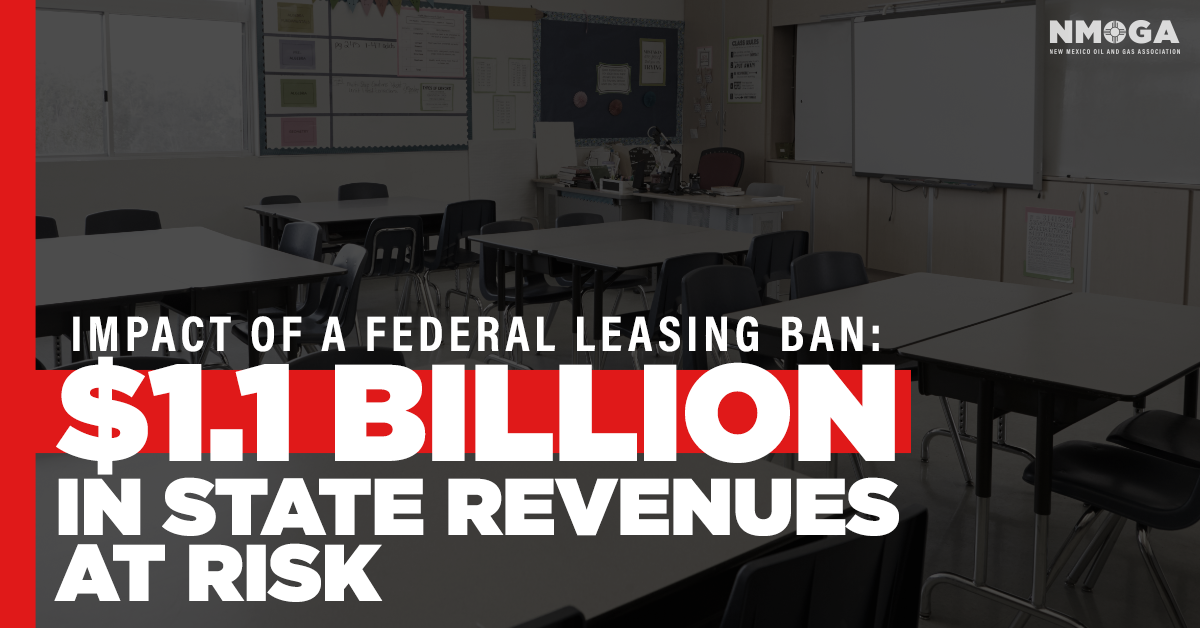 SANTA FE, NEW MEXICO, September 9, 2020 – The New Mexico Oil and Gas Association (NMOGA) and the American Petroleum Institute (API) today released a new analysis warning of negative consequences for New Mexico if a ban on federal leasing and public lands were to take effect. New Mexico, which accounts for 57 percent of federal onshore oil production and 31 percent of onshore natural gas production, is projected to be among the states hardest hit, losing over 62,000 jobs by 2022. With nearly 40 percent of the state’s budget funded by natural gas and oil production, a ban could put at risk more than $1 billion of federal revenue sharing which helps support New Mexico’s education and conservation programs.

“Restricting oil and gas development on federal lands will rob New Mexico of opportunities for economic growth and hollow our schools of critical resources that put teachers in classrooms and help our young children learn,” NMOGA Executive Director Ryan Flynn said. “New Mexico has enjoyed economic success in recent years because of investments and responsible development on federally managed lands but changing course now will only ensure that jobs and capital stops at our state border. With vast stretches of public land, it is simply impossible to divorce our economic success from land management policy in western states like New Mexico and funding for education, access to healthcare, and new infrastructure are all on the line as a result.”

“Banning federal leasing and development on federal lands and waters would derail decades of U.S. energy progress and return us to the days of relying on foreign energy sources hostile to American interests,” API President and CEO Mike Sommers said. “This is ultimately a choice between American-made energy and foreign energy, a choice between American jobs and foreign jobs. It’s clear a federal leasing ban should be off the table – there’s far too much at stake for American workers, local economies and our nation’s energy security.”

The analysis, prepared by OnLocation and commissioned by API, used the same software the U.S. Energy Information Administration (EIA) uses to produce their Annual Energy Outlook. Key projections include:

API represents all segments of America’s oil and natural gas industry. Our more than 600 members produce, process and distribute most of the nation’s energy. The industry supports more than ten million U.S. jobs and is backed by a growing grassroots movement of millions of Americans. API was formed in 1919 as a standards-setting organization. In our first 100 years, API has developed more than 700 standards to enhance operational and environmental safety, efficiency and sustainability.

To learn more about API and the value of oil and natural gas, please visit API.org.