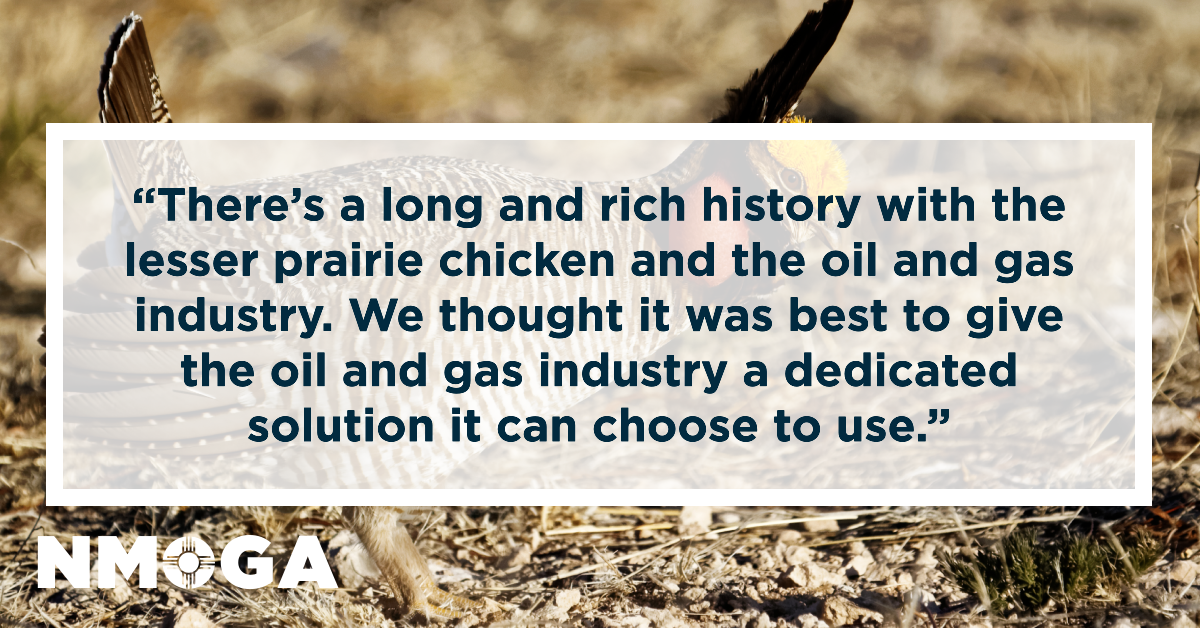 Oil and gas companies could play a key role in saving a nearly-extinct native bird species in southeast New Mexico.

That’s why the U.S. Fish and Wildlife Service released a plan specific to extraction operators that would specify actions they could take to prevent impacts to lesser prairie chicken (LPC) habitat in eastern New Mexico and portions of West Texas.

The service last year proposed listing the prairie chicken as endangered in its southern distinct population segment (DPS), which is in New Mexico and West Texas, while the northern DPS in Kansas, Colorado, Oklahoma and the northern Texas panhandle was proposed for a threatened listing.

Endangered listings unlock the strongest federal protection measures when a species’ extinction is viewed by the service as imminent while a threatened status means a species could soon become endangered.

Along with protecting bird populations, viewed to be as low as 1,500 in the chicken’s southern DPS, the Service is also tasked with setting aside lands that could be used as habitat for recovery.

That population was once believed to be in the millions across all five states.

To begin the work of recovering the bird to its former numbers, two habitat recovery plans were released by federal government: one tailored to the renewable energy sector last year and another published for the oil and gas industry Feb. 11, starting a 30-day public comment period.

If a company signs up for one of the plans, they will be called on to follow specific conservation measures and in response will be protected from future litigation.

That liability transfers to LPC Conservation, the firm that developed the plans and acts as their administrator.

Chief Executive Officer Wayne Walker said his company hopes to use the plans to set up conservation “strongholds” for the bird that would see privately-owned acreage set aside for the chicken’s recovery.

It’s been done before, but Walker said his vision involves seeking out specific lands ideal for bird habitat and adjacent to other strong holds.

“The service has got a very prescriptive guidance. That says this is what these birds needs. This kind of habitat, this scale, this many leks,” Walker said. “There’s not a lot of places that have that. There’s a real site scarcity for conserving this bird.”

A lek is a breeding group of animals, and used by conservationists as a measure of species' recovery.

To be able to do this, Walker said LPC Conservation approaches landowners and others them “market value” for their land to be used in conservation.

This differs from past efforts, he said, that targeted lands that were already available and unused, leading to smaller strongholds scattering across the bird’s range.

“Other programs have a lot of acreage on the scoreboard, but they’re spread out,” Walker said. “This bird needs thousands of acres of continuous acreage, not pockets of conservation.”

By paying more for the land, Walker said his plan will be more acceptable for owners like rancher or energy companies.

“The difference that we have is we’re trying to do the one thing no one has done in New Mexico or West Texas,” Walker said. “We’re trying to pay landowners a market value for the conservation strongholds exactly where the bird needs them to be.

“That changes the nature of the discussion to what is going to take from a market based approach.”

When a company joins on to the habitat plan, it will first assess operations in the habitat area, studying the impact of infrastructure like wells, pipelines or roads and submitting a report to the Service for certification.

Companies will purchase credits that will create incentives for them to avoid known habitat and limit impacts.

Walker said it was important to have a plan specific to the oil and gas industry as the main economic driver in southeast New Mexico and West Texas and an industry that could be most affected by conserving land from development.

Adam Riggsbee, founder of RiverBank Conservation – a “conservation bank” company in Austin, Texas that finances the land transactions and collaborated on the plan – said so far there are about 10,000 acres approved for conservation with 2,000 officially set aside.

On the Texas side of the southern DPS, Riggsbee said about 9,000 acres are conserved, and another 1,500 could soon be added.

Collaboration with the industry was crucial, he said, to make sure conservation can occur without disrupting economic development.

That will allow private industry, which owns lands needed, to join in the effort as a partner, Riggsbee said.

“That investment is both through dollars and land. The investment and industry can work in lockstep. The economy can continue hum along while giving the lesser prairie chicken a shot at recovery,” he said. “That’s what we want, sustainable development.”

Amy Lueders, southwest regional director of the U.S. Fish and Wildlife Service said the collaborative approach will bring conservation that is sustainable while continuing to support local industry.

“This plan will result in strategic conservation for the lesser prairie-chicken by offsetting impacts from enrolled oil and gas development,” she said. “Collaborations like this play a vital role in conserving imperiled species and their habitats while providing needed certainty to support development.”