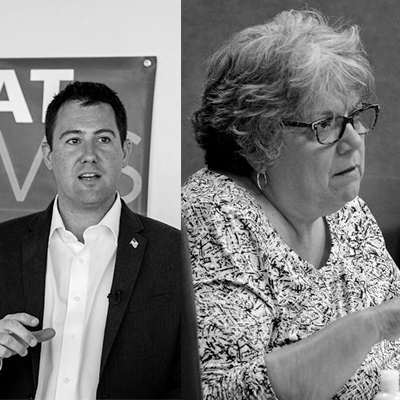 Last night’s “town hall” on the unlikely possibility of oil-and-gas drilling within Bernalillo County and/or the City of Albuquerque went about as expected.

Davis warned that the oil-and-gas industry’s operations are getting closer and closer to “precious and protected areas,” and bragged that since the Trump administration abandoned the Paris Agreement, local-government officials — like him! — have attempted to “fill the gap of leadership” in “climate change.” He then introduced the night’s sole speaker, Santa Fe geologist Donald T. Phillips, who went on an extended harangue about how fracking in the Albuquerque Basin of the Rio Grande Rift would almost certainly poison the Duke City’s drinking water.

Phillips noted, quite correctly, that the geology of the metro area is different than the northwest and southeast portions of the Land of Enchantment, where the state’s oil and gas are currently produced. If his presentation had been limited to a science-based exploration of why regulators should pay particular attention to the basin’s unique geology, Phillips might have done some good.

But as the above photo indicates, last night was about eco-apocalypticism, not science. Positioned at the entrance to the Vincent E. Griego Council Chambers were both 350.org, a nonprofit working to destroy the oil-and-gas industry, and Food & Water Watch, “the first U.S. national organization to call for a ban on fracking.” Both were distributing agiprop (“Exposing the Oil and Gas Industry’s False Jobs Promise for Shale Gas Development,” “The Social Costs Fracking”) and gathering petition signatures.

Phillips’s presentation, and answers to audience questions, revealed both his ignorance and laziness. He stressed fracking’s demand for water without disclosing that oil-and-gas producers consume “only a fraction of total industrial water use nationwide” and failed to note the growth of wastewater-recycling services. Phillips repeatedly made reference to the “chemicals” used in fracking fluid without explaining that the substances typically constitute less than 1 percent by volume, and that many of the additives frackers employ can be found in household products such as deodorant, soap, furniture polish, shampoo, plastics.

Phillips veered into severe malpractice when he touted the “major problems” he claimed fracking caused in Wind River, Wyoming and Pennsylvania’s “Dimock County.” (Dimock is a township, not a county.) Phillips touted a Stanford University study that alleged contamination in Wind River, but failed to mention that the area has had water-quality problems for decades. In addition, Wyoming’s environmental regulators have concluded that “it is unlikely that hydraulic fracturing has caused any impacts to … water-supply wells.” As for Dimock, despite many years of analysis, “at no time did … government or private agencies testing find any fracking chemicals in any of the wells.” Cabot Oil & Gas has even “filed a $5 million suit against Dimock resident Ray Kemble and his lawyers, arguing that they tried to extort Cabot through a frivolous lawsuit.”

Attendees, as Davis noted, were not a cross-section of the ABQ metroplex’s residents, but “a lot of friendly faces” who have agitated against Sandoval County’s proposed oil-and-gas regulations. Cluelessness was the norm. (Two actual questions: “Do they need anyone’s permission to do this?” “What is the methane used for that they get?”)

All in all, the event was a taxpayer-subsidized, laughably one-sided farce about a revolutionary energy-production process that has yielded big bucks for green hysterics — and photo ops for Hollywood ignoramuses — but very little water pollution. Next up for Phillips: a repeat performance before the Mid-Region Council of Governments. Let’s hope that his presentation to the “multi-county governmental agency” is balanced by a speaker who’s interested to drilling down to the facts about fracking.