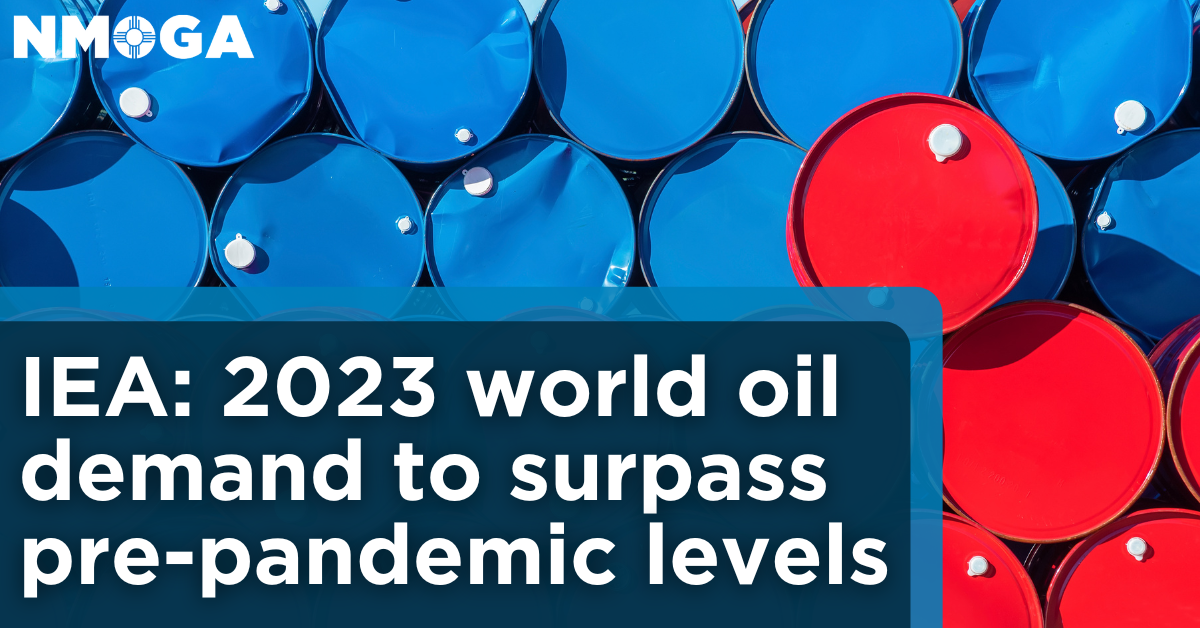 According to IEA, while higher prices and a weaker economic outlook are moderating consumption increases, a resurgent China will drive gains next year, with growth accelerating from 1.8 million b/d in 2022 to 2.2 million b/d in 2023. In contrast to 2022 when the OECD led the expansion, non-OECD economies are set to account for nearly 80% of growth next year, the agency said.

“After seven consecutive quarters of hefty inventory draws, slowing demand growth and a rise in world oil supply through the end of the year should help world oil markets rebalance. This situation might prove short-lived, however, as tougher sanctions on Russia come into full force, oil demand in China recovers from Covid-lockdowns, if sharper Libyan losses persist and the OPEC+ spare production capacity cushion erodes,” IEA said.

Global oil supply may struggle to keep pace with demand next year, as tighter sanctions force Russia to shut in more wells and a number of producers bump up against capacity constraints. European Union (EU) countries have agreed to ban 90% of the bloc’s imports of Russian crude and oil products, to be phased out over the next 6-8 months. Modest increases from OPEC+ will provide a partial offset, but non-OPEC+ will dominate gains for the remainder of the year and in 2023.

Non-OPEC+, led by the US, is set to lead world supply growth through next year, adding 1.9 million b/d in 2022 and 1.8 million b/d in 2023. As for OPEC+, total oil output in 2023 may fall as embargoes and sanctions shut in Russian volumes and producers outside the Middle East suffer further declines. Assuming Libya rebounds from a steep drop, the bloc’s production could increase 2.6 million b/d this year, eroding its spare capacity cushion.

“Nevertheless, to keep the implied balance from tipping into deficit, OPEC+ would have to further tap into its dwindling capacity cushion, reducing it to historic lows of just 1.5 million b/d,” IEA said.

Global refining capacity is set to expand by 1 million b/d in 2022 and 1.6 million b/d in 2023, boosting throughputs by 2.3 million b/d and 1.9 million b/d, respectively, IEA forecasts. Nevertheless, product markets are expected to remain tight, with a particular concern for diesel and kerosene supplies. While diesel cracks eased month-on-month in May, both jet fuel and gasoline cracks surged as demand picked up seasonally.

“With the start of summer, gains in oil product prices and cracks have been even stronger as refinery output has failed to keep up with demand for key products. As the refinery maintenance season winds down in the US, Europe, and Asia and a rebound in Chinese throughputs gathers pace, global refinery activity is set for a solid recovery. Runs are forecast to rise by 3.5 million b/d from May through August, and by 2.3 million b/d for the year on average. A further 1.9 million b/d increase is expected next year, supported by new refinery start-ups in Africa, the Middle East and Asia. However, shortages in individual products may well persist due to uneven rates of demand growth and limits in the refining system. Diesel and kerosene supplies remain of particular concern. OECD industry stocks of middle distillates have fallen by 25% since January 2021 to their lowest levels since 2004. That very limited cushion is driving middle distillates prices to record highs, with a knock-on effect for other products which could cause more pain at the pump just as pent-up demand is unleashed during the peak driving and summer cooling season,” IEA said.

Despite economic headwinds, steady demand for light sweet crude in a tight physical market is boosting marker grade prices as they are in the same crude quality family. Since 6 June, WTI and Brent futures have averaged over $120/bbl. North Sea Dated hit $127.9/bbl on 13 June.

Higher oil prices and a weaker economic outlook continue to temper our oil demand growth expectations. But in 2023, a resurgent China will boost non-OECD demand growth, offsetting a slowdown in the OECD.