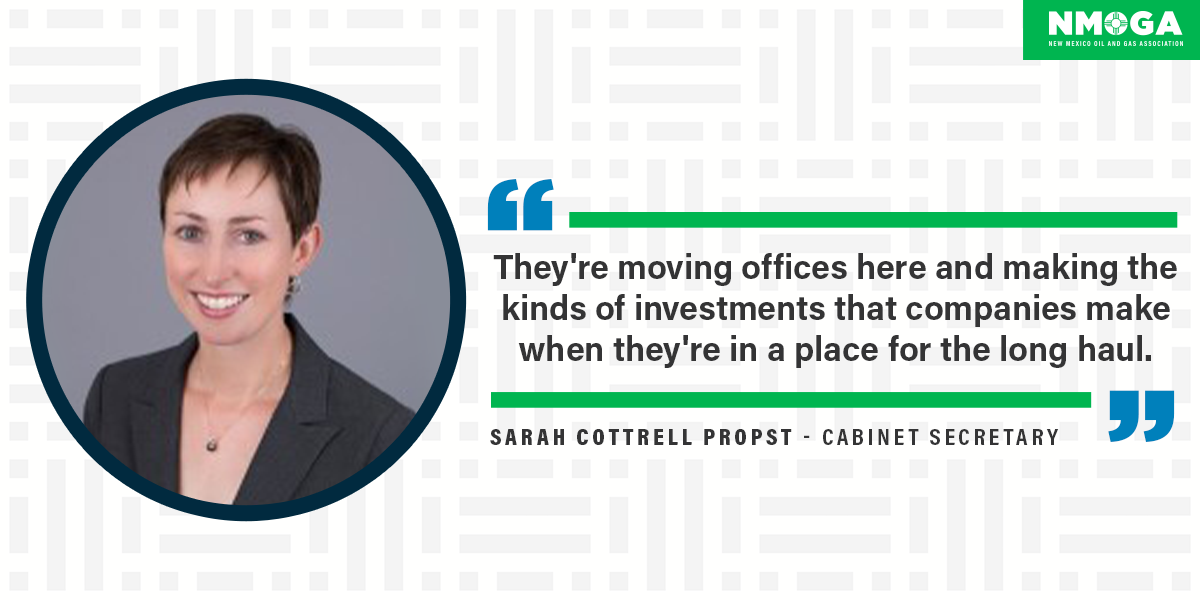 New Mexico's ambitious target to produce half its electricity from renewable sources by 2030 will not come at the expense of the state's booming oil and gas sector, Energy Secretary Sarah Cottrell Propst said in an interview with S&P Global Platts.

Still, Cottrell Propst thinks the state needs to diversify its economy beyond oil and gas, the largest contributor to state revenue.

"If global oil prices go down, that affects us in a negative way," she said. "So we need to diversify."

New Mexico is the No. 3 oil-producing state in the US, behind Texas and North Dakota.

The state passed both Alaska and California in oil production in 2017. In March, New Mexico even out-pumped Venezuela for the first time and appears on track to continue the trend.

Asked if projections for a slowdown in global oil demand put New Mexico's economy in jeopardy, Cottrell Propst said investment still happening in the Permian is on a "decadal scale."

"They're moving offices here and making the kinds of investments that companies make when they're in a place for the long haul," she said. "We expect this to continue for years to come."

"We can produce here at really competitive prices," she added. "I think they're betting on this being the place to be even with those question marks on the horizon."

Adrienne Sandoval, director of the state energy department's oil conservation division, expects production to level out but not fall.

New Mexico's oil output is concentrated in the southeast of the state, where it shares the Delaware and Permian basins with Texas, although crude coming out of New Mexico has been lighter than Midland grades.

Like Texas, New Mexico drillers are flaring substantial associated gas because of a lack of natural gas pipelines.

Governor Michelle Lujan Grisham, who took office in January, signed an executive order the same month calling on the energy department to develop a regulatory framework to reduce flaring "as soon as practicable." The order says venting and flaring increased 18% from 2017 to 2018, and it estimated the practice wastes $244 million worth of gas each year.

"Part of why we're pursuing responsible methane emission reduction rules in the state is because the federal rules are either being rolled back or are incomplete," Cottrell Propst said. "We think we can do better even as we work really closely with industry and develop nation-leading methane reduction rules here."

New Mexico's state legislature this year passed the Energy Transition Act requiring that all utilities produce 50% of generation from renewable sources by 2030, with investor-owned utilities needing to reach 100% renewables by 2045 and electric cooperatives by 2050.

"We worked with everyone on setting these goals. They're ambitious and they're a stretch, but they also think they can do it," she said of utilities. "That's really important. It was not a law that was passed over their dead bodies."

Cottrell Propst said the bill has cost-containment mechanisms and "off-ramps" should reliability become a concern.

Tariffs on imported solar panels and threats of further retaliatory tariffs from China have not impeded New Mexico's renewable development, she said.

However, the state sees a lack of federal leadership to develop renewable energy.

"We do feel like states need to lead on renewable energy and climate policy in order to address some of the serious environmental problems we're facing," Cottrell Propst said.

On the Trump administration's proposal to move the Bureau of Land Management headquarters to Colorado from Washington, DC, Cottrell Propst said she does not expect drilling permits to slow, since most are already handled out of New Mexico field offices in Carlsbad and Farmington. But, "any kind of disruption and uncertainty in a regulatory body is unhelpful and can create problems," she said.