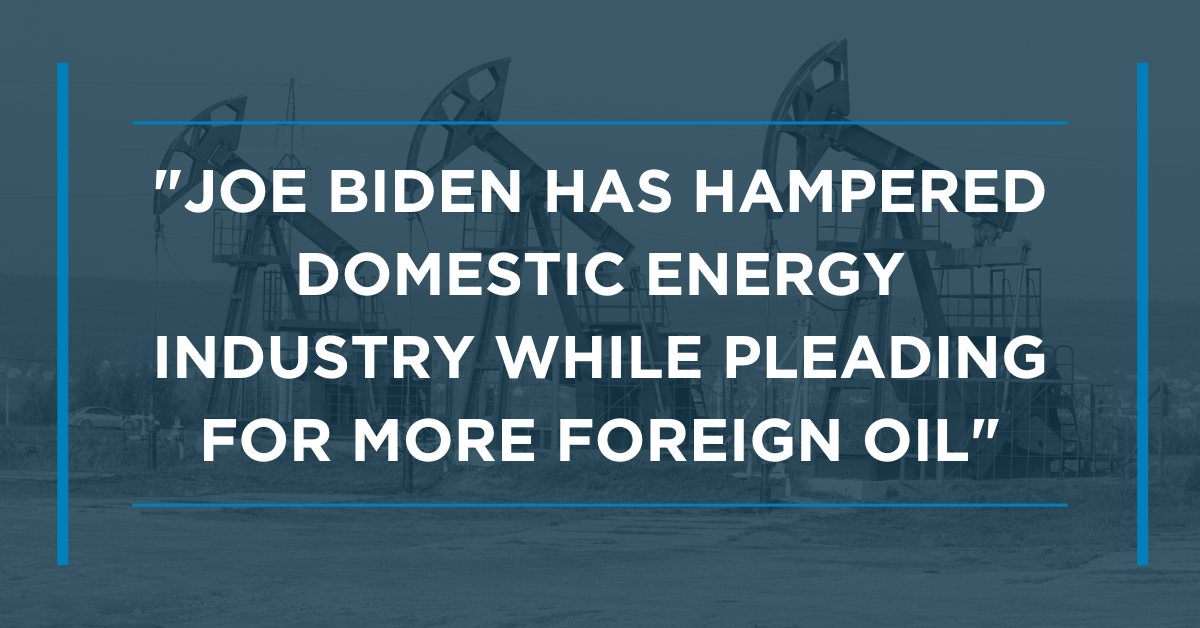 President Biden has taken a number of steps to curb domestic fossil fuel production since taking office but has still turned to foreign dictators for oil as prices have ticked up.

The Biden administration has aggressively pushed its climate agenda, which includes a transition from fossil fuels to green energy, over its first 20 months in office. For example, it has taken aim at oil and natural gas pipelines, restrained leasing on federal lands and waters, moved forward with stringent climate disclosure rules for the private sector and introduced burdensome environmental regulations.

"Americans are taking it in the shorts because the Biden administration has basically declared war on American affordable, abundant energy," Dan Kish, a senior fellow at free-market think tank Institute for Energy Research, told Fox News Digital in an interview.

The average price of gasoline nationwide increased to $3.87 a gallon on Thursday, extending a multi-week streak of price increases, according to AAA data. Oil prices in the U.S. and worldwide have also moved upward in recent days.

And the National Energy Assistance Directors Association projected in September that the average cost of U.S. home heating across all fuels — including gas, heating oil and propane — will spike 17.2% this winter compared to last year, forcing millions of lower-income families to choose between paying for heat, food, medicine and rent. Natural gas prices have increased to levels far higher than historic trends over the last several months.

While the administration has sought to restrict domestic oil and gas production, it has also turned to foreign regimes led by dictators, including Saudi Arabia and Venezuela. After the Saudi-led Organization of the Petroleum Exporting Countries (OPEC) announced a major 2-million-barrel-per-day output cut Wednesday, Biden expressed disappointment.

"The President is disappointed by the shortsighted decision by OPEC+ to cut production quotas while the global economy is dealing with the continued negative impact of Putin’s invasion of Ukraine," the White House said in a statement after the announcement.

"At a time when maintaining a global supply of energy is of paramount importance, this decision will have the most negative impact on lower- and middle-income countries that are already reeling from elevated energy prices," the statement added.

In addition, Biden told reporters Thursday that he was considering "alternatives" to OPEC and didn't rule out lifting sanctions on Venezuela's once-booming oil industry as part of that plan. He didn't mention domestic production as an alternative. The Wall Street Journal reported Wednesday that the administration was moving closer to announcing a deal with the South American communist government involving oil drilling.

Overall, the president has taken multiple steps throughout his tenure to follow through on his 2019 campaign pledge to "end fossil fuel" in the U.S.

"The administration continues to look elsewhere when the solution has always been here at home," Emily Haggstrom, the vice president of communications for the Consumer Energy Alliance, told reporters during a call Thursday. "This should be a no-brainer in economics, national security and environmental terms, and we urge the Biden administration to seize this moment."

Hours after his January 2021 inauguration, Biden issued an executive order canceling the federal permit for the Keystone XL pipeline, the proposed extension of an existing pipeline that would have transported an additional 830,000 barrels of oil from western Canada into the U.S., according to its operator, TC Energy. In the order, Biden wrote that the U.S. must "prioritize the development of a clean energy economy."

The Biden administration has also introduced a new pipeline approval process that it said would factor in downstream greenhouse gas emissions, a rule that could represent a major hurdle for future energy infrastructure development.

Led by Biden-nominated chairman Rich Glick, the Federal Energy Regulatory Commission (FERC) announced in February that it had updated its process for green-lighting pipelines. Under the proposal, which was heavily criticized by Republicans, FERC would consider the direct and indirect impacts of greenhouse gas emissions produced by future pipelines under review.

"These policies are going to make it next to impossible to build any new natural gas infrastructure or upgrade our existing facilities in the United States," Sen. John Barrasso, R-Wyo., the top GOP member of the Senate Energy Committee, said in March. "These orders are going to increase the costs for American families to heat and power their homes. And they are going to undermine the reliability of our electric grid."

Also, shortly after he took office, Biden ordered the Department of the Interior (DOI) to pause oil and gas leasing on federal lands and waters. While a federal judge nixed the moratorium last year, the Biden administration has repeatedly delayed holding onshore lease sales.

Domestic oil production, meanwhile, has remained level at around 12 million barrels per day, more than a million barrels less than its March 2020 pre-pandemic level, according to federal data.

"He is the worst oil and gas-leasing president in history," Kish told Fox News Digital. "He sits around complaining about the price of oil and the price of gasoline and neglects the one thing that he could do that would have a demonstrated effect."

The DOI has also proposed an offshore leasing plan that could include at most 11 lease sales but which may also include no new lease sales through 2028. The Trump administration's version of the plan included nearly 50 sales.

The agency has canceled a number of previously scheduled offshore lease sales in recent months.

In June 2021, Interior Secretary Deb Haaland ordered a pause on all oil and gas leases in the Arctic National Wildlife Refuge, reversing the previous administration's efforts to allow some drilling in the federal refuge located in northern Alaska.

Also in Alaska, the administration backed off a drilling project last year that would have produced 100,000 barrels of oil per day, led to $10 billion in government revenue and create 2,000 construction jobs and 300 permanent jobs. The Bureau of Land Management issued a revised environmental analysis that factored in potential climate impacts of the project in July.

In another executive order, Biden ordered federal agencies to factor in the "social cost" of carbon and methane emissions when initiating environmental analysis on proposed projects. After he issued the order, 10 Republican states filed a lawsuit challenging the rule, arguing it was "an act of executive overreach that will kill thousands of jobs throughout the country [and] threatens to impose more burdens and harms on the American people."

The Securities and Exchange Commission unveiled a rule in March that would require private corporations to disclose a wide swath of carbon emissions data and other climate information. Republicans, energy industry groups and business groups have opposed the rule, saying it would cost the private sector billions of dollars.

"We have abundant resources in America to be energy independent, secure, and to protect people['s] quality of life," Rep. Cathy McMorris Rodgers, R-Wash., the top Republican on the House Energy and Commerce Committee, said in a statement Thursday.

"Turning to Venezuela or any other dictator is not acceptable to freedom-loving Americans who are suffering already under Biden’s energy and spending crises that are increasing their cost of living," she continued. "It’s time for the President of the United States to show some leadership, and get serious about flipping the switch for more American energy production."