Look To American Oil And Natural Gas, Not OPEC+ 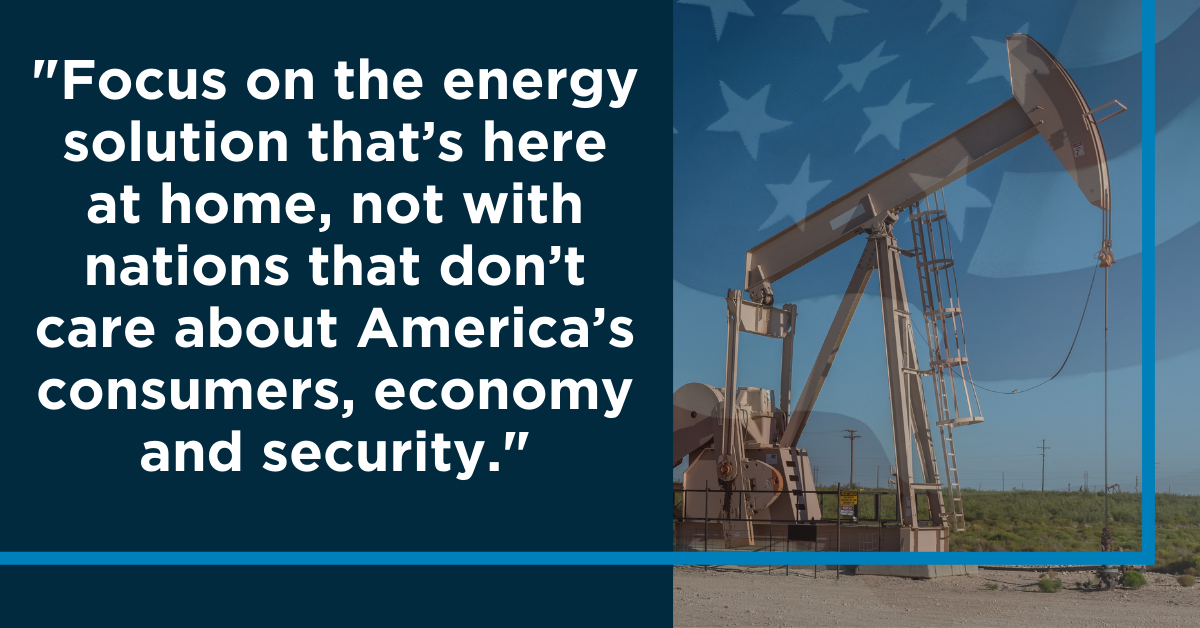 For the second time in less than three months, OPEC+ has rejected the Biden administration’s plea for accelerated crude oil production. With U.S. gasoline prices averaging $3.39 per gallon – the highest in seven years – that’s certainly not what the White House wanted to hear from the oil cartel.

As we’ve said before, the administration should focus on the energy solution that’s here at home, not with nations that don’t care about America’s consumers, economy and security.

U.S. natural gas and oil, not OPEC+, is the answer to our country’s energy needs, now and in the future.

That the administration continues to beg OPEC+ to produce more crude oil to help post-pandemic supply meet soaring demand – bypassing American producers – is misguided. OPEC+ looks to its own interests, not America’s. “With regard to the U.S., yes we have been having discussions at all levels and we still believe we are doing the right job and the most convenient job,” Saudi energy minister Prince Abdulaziz bin Salman said this week.

Sounds like a solid “no” – and the strongest sign yet that the White House should look to American production instead. The administration should:

At a minimum, anti-oil and natural gas moves by the administration have a dampening effect on domestic investment, hiring and production. As API Chief Economist Dean Foreman said in this Q&A:

“When the Biden administration signals that it wants to incentivize a shift away from oil and other fossil fuels, and then it takes actions like we've seen – freezing oil and natural gas leasing on federal lands, killing the largest U.S.-Canadian pipeline project in Keystone XL, considering that the oil and gas industry be taxed more so and differently than every other U.S. manufacturing sector – these add uncertainty about whether long-lived investments in fossil fuels will be worthwhile, which is completely the wrong signal for the industry to be able to meet consumer demand in the immediate and near future.”

Indeed, Reuters energy columnist John Kemp writes that the state of U.S. energy is reflected in low oil inventories. Commercial crude stocks ended last week 18 million barrels below the pre-pandemic average, Kemp writes, with stocks at the Cushing, Oklahoma, oil hub 25 million barrels (48%) below where they were before the pandemic. Kemp:

The overall supply situation remains tight. Depleted inventories mean there are few shock absorbers to cope with any unexpected interruption in output or stronger than anticipated growth in consumption. At this point, supply problems or unexpected strength in demand could result in sharp price increases because there is no slack left to absorb them in the short term, unless OPEC+ can be persuaded to increase its output faster.

Clearly, OPEC+ is not persuaded to accelerate its output, not now and not until sometime in 2022. A caution: If the global economy continues to expand next year and oil demand grows as expected, upward pressure on prices could result. Stay tuned.