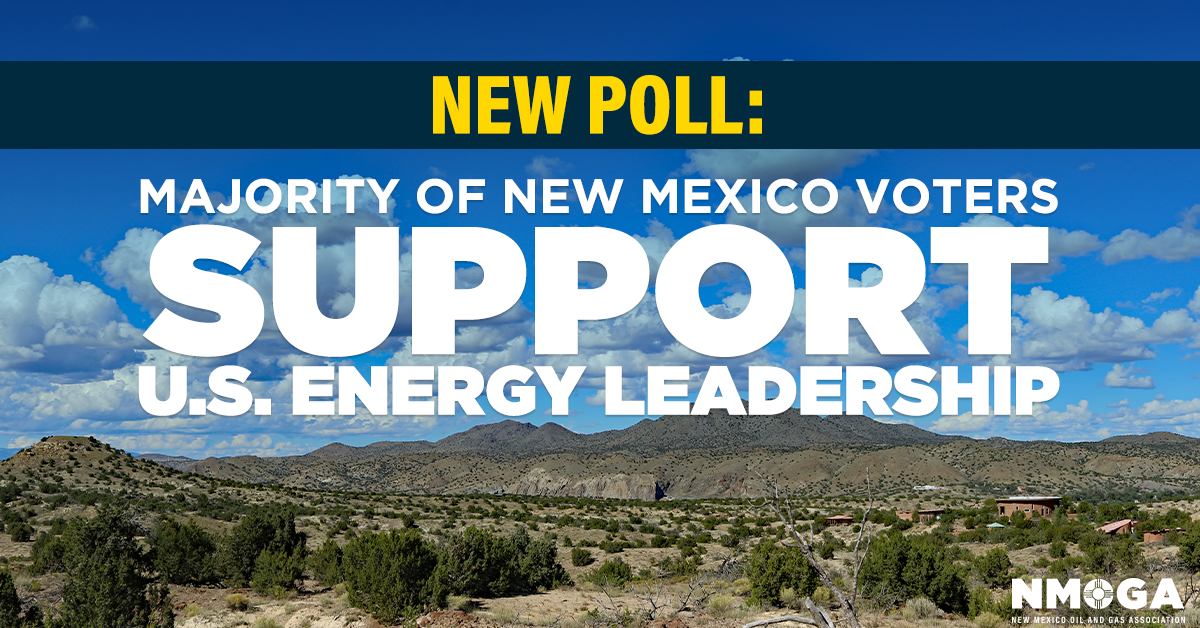 WASHINGTON, DC, SANTA FE, New Mexico – With the first of two party conventions underway this week, the American Petroleum Institute released new polling conducted by Morning Consult showing nearly two-thirds of New Mexico voters would be more likely to vote for candidates who support access to natural gas and oil produced in the U.S. More than 70 percent of voters believe natural gas and oil will play a significant role in meeting America’s energy needs 20 years from now, and 67 percent of Democrats believe the industry will play an important role in helping the economy recover from the pandemic.

"As we approach the election, it is clear a majority of New Mexico voters know and support the critical role the natural gas and oil industry plays in driving the economic recovery, keeping energy costs low and protecting national security,” API President and CEO Mike Sommers said. “U.S. energy leadership has been a priority of every one of our last seven presidents, Democrat and Republican – a trend this polling shows New Mexico voters want to see continue. Proposals to ban U.S. energy production are out of step with bipartisan support for an all-of-the-above energy approach and would set America back by returning us to the days of relying on foreign energy.”

“New Mexicans clearly recognize that oil and natural gas production is essential to our economy and recovery,” said New Mexico Oil and Gas Association Executive Director Ryan Flynn. “Every corner of our state relies on our industry for safe, affordable energy as well as funding for public schools, new roads and highways, and access to healthcare. Policymakers across New Mexico and America should take note of the fact that our country grows, communities thrive, and people flourish on the strength and resilience of our industry.”

A new analysis prepared by PricewaterhouseCoopers (PwC) outlines how the U.S. natural gas and oil industry is a key economic driver in New Mexico, supporting nearly 117,000 jobs and contributing more than $17 billion to the state’s economy in 2018.

• 71 percent of voters, including 59 percent of Democrats and 68 percent of Independents, think natural gas and oil will be a significant part of America’s energy needs 20 years from now.

• Nearly two-thirds of New Mexico voters, including a majority of Independents (65 percent) and roughly half of Democrats (49 percent), would be more likely to vote for a candidate who supports access to oil and gas produced in the U.S.

• 73 percent of voters, including 67 percent of Democrats and Independents, believe the industry will play an important role in helping the economy recover from the coronavirus pandemic.

• 95 percent of voters believe it is important to produce enough energy so the U.S. is not reliant on other countries for oil.

• 94 percent of voters believe it is important to keep energy and gasoline prices affordable.

• 81 percent of respondents support congressional action to invest in energy infrastructure to increase the production and distribution of domestic energy.

• 73 percent of voters in New Mexico, including 67 percent of Democrats and 67 percent of Independents, believe the natural gas and oil industry will have an important role in helping the economy recover from the economic impact of the coronavirus pandemic.

• 85 percent of respondents think natural gas and oil provide a value to their life.

• 62 percent of voters agree that our country’s national security has increased because America is producing more natural gas and oil.

The poll, by Morning Consult, was conducted online between June 26 and July 10, 2020, among a sample of 501 New Mexico registered voters.

API represents all segments of America’s oil and natural gas industry. Our more than 600 members produce, process and distribute most of the nation’s energy. The industry supports more than ten million U.S. jobs and is backed by a growing grassroots movement of millions of Americans. API was formed in 1919 as a standards-setting organization. In our first 100 years, API has developed more than 700 standards to enhance operational and environmental safety, efficiency and sustainability.