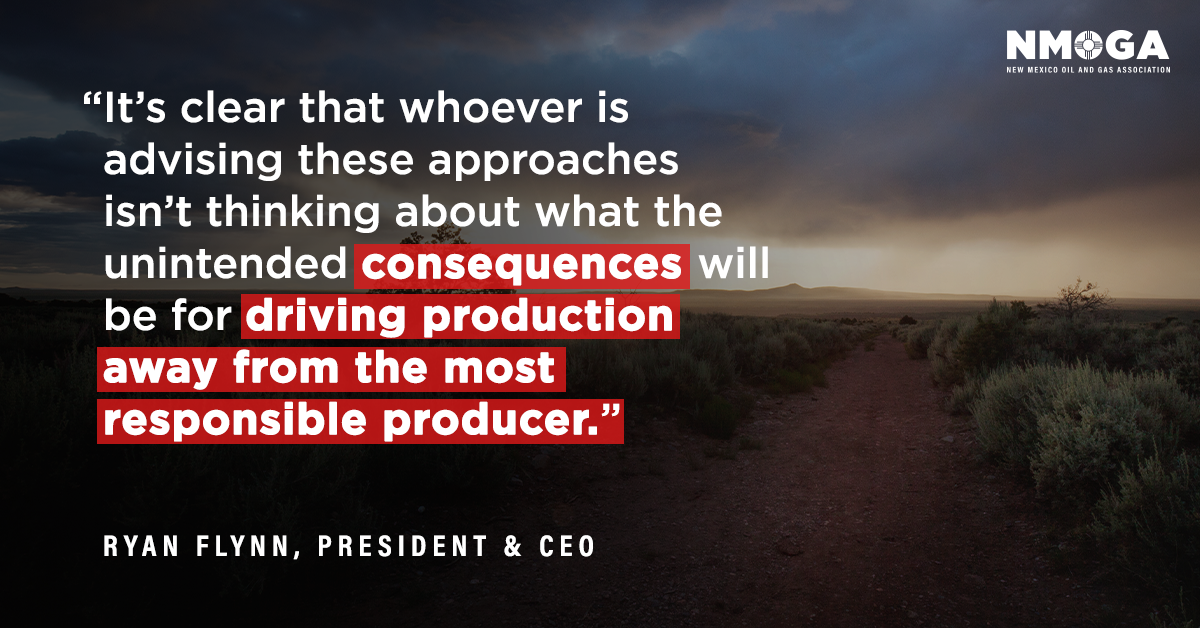 The federal government’s 60-day suspension of new oil and gas leasing and drilling permits on public lands sent shockwaves through the industry in New Mexico and divided industry experts over potential impacts.

Flynn said he was “disappointed” by the order after it was announced Thursday. He said he doesn’t believe the suspension would help reduce emissions, and that the order interrupts the development of infrastructure that connects new and existing wells to pipelines, forcing operators to flare methane emissions rather than recovering them.

“If the goal is to combat climate change by reducing emissions, you’ve just frustrated that goal with this action,” Flynn said.

Dawn Iglesias, the chief economist for the Legislative Finance Committee, told lawmakers during a committee hearing Thursday the state’s most recent revenue estimates do not account for the change in federal policy.

“If there are limitations on federal drilling … that could significantly impact production,” Iglesias said, adding about half of the state’s oil production currently occurs on federal land.

In addition, while the new policy would not affect already approved drilling leases and permits, she said oil wells are typically the most productive shortly after being drilled.

Flynn declined to give an estimate for how much he expects the 60-day suspension might impact New Mexico’s budget, but said he expects it to be significant. Flynn said he spoke with producers who have looked at moving operations elsewhere — either overseas or to states where the oil and gas industry is less focused on public lands.

“New Mexico is very important to a lot of these companies, but they also have other places they can invest,” Flynn said.

No lease sales on tap till April

However, Jim Peach, professor emeritus of economics at New Mexico State University, disagreed that the 60-day suspension would have a significant impact on the industry.

Peach said the Bureau of Land Management is not slated to have another competitive oil and gas lease sale until April, after the 60-day window expires. He said he didn’t believe operators were in any danger from the shutdown order, and doesn’t think they’re likely to leave the state.

“They’ve survived 150 years, they’re gonna be around next year and the year after,” Peach said.

Still, Flynn said he and others in the oil and gas industry are concerned that the federal order is a harbinger of things to come from the new administration. He said he was concerned that the Biden administration might make the rules permanent, which he said could create an environment where producers leave for countries with less stringent environmental restrictions.

“It’s clear that whoever is advising these approaches isn’t thinking about what the unintended consequences will be for driving production away from the most responsible producer,” Flynn said.

The Department of the Interior’s order says the suspension is to give the new administration time to review “fact, law and policy.” And there is an exemption allowing certain high-ranking officials within the Interior Department to issue such permits during the 60-day break.

A White House spokesman on Friday didn’t say whether the administration has plans beyond the two-month suspension, though President Joe Biden during the campaign did pledge to end the leasing of public energy reserves as part of his effort to address climate change, according to the Associated Press.

Rep. Deb Haaland, D-N.M., Biden’s nominee for secretary of the Interior, didn’t respond to a request for comment on the order handed down from the department she may soon be running.

But during her most recent campaign for Congress, Haaland took a hard line against the fossil fuel industry.

She said in a Journal questionnaire last year that the industry has made billions while putting communities in harm’s way, and that she supports a ban on fracking. She also has said that America’s public lands are sacred spaces that belong to all Americans and should be protected.

A spokesman for Sen. Martin Heinrich, D-N.M., said Friday the senator doesn’t support a “unilateral ban” on new oil and gas leases. But Heinrich said the two-month pause the Biden administration put in place was appropriate.

“It’s fully appropriate to take a step back. The last administration was out of control in leasing public lands with no consideration of wildlife habitat, recreational impacts, or sacred cultural landscapes,” Heinrich said in a statement. “It’s also crystal clear that the zero carbon, zero pollution economy is coming. Even oil and gas majors are planning for that future. To weather that change New Mexico needs a transition plan with a predictable glide path for producers and robust investments in the communities where our energy veterans have produced our country’s transportation fuels.”

New Mexico’s lone Republican member of Congress said she has cosponsored legislation that aims to block the Biden administration from placing suspensions on drilling permits on federal land in the future.

“If President Biden follows through on his promises to make this ban on new federal leases permanent, New Mexico stands to lose more than 62,000 jobs and billions of dollars in state revenue,” Rep. Yvette Herrell, R-N.M., said in a statement. “I will be taking further action in the coming weeks to protect our jobs and our state.”

“Now, we must assess how we can best protect our nation’s most treasured lands and resources for generations to come,” she said in a statement. “I support the administration’s bold actions, and look forward to working with my colleagues to transition to a vibrant, green energy future for New Mexico and our planet.”

“As this examination takes place, it’s important to me that New Mexicans’ voices are heard and the administration listens to their perspectives, including safeguarding our sacred sites and special places like Chaco Canyon and building economic opportunities,” he said in a statement. “The science is clear: failing to act on climate threatens our national security, our economy, and our way of life in New Mexico.”

A spokeswoman for Gov. Michelle Lujan Grisham said Friday the administration was still reviewing the federal action and its short- and long-term implications for the state.

“Certainly we all understand the critical importance of this industry to New Mexico’s bottom line and of the imperative to diversify our state economy and energy portfolio,” Lujan Grisham spokeswoman Nora Meyers Sackett told the Journal.

Sen. Gay Kernan, R-Hobbs, said the policy shift could have a huge impact on available revenue for public schools and other state programs.

“They better readjust their estimates because there’s just not going to be the revenue coming in,” Kernan said in an interview.

She also said it could drive many oil producers to move their operations from southeast New Mexico to neighboring Texas, which has far less federal land and mineral rights and more privately-owned land.