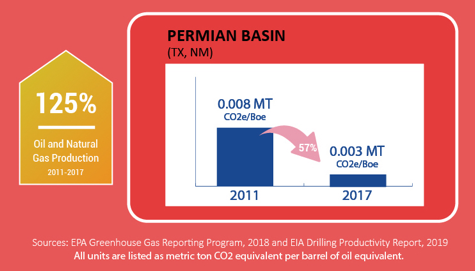 SANTA FE, NEW MEXICO – A new analysis of data from the United States Environmental Protection Agency and Energy Information Administration highlights a remarkable decline in methane emissions intensity from oil and natural gas production in the New Mexico-Texas Permian Basin. The analysis by Energy in Depth shows that methane emissions intensity declined by 57% from 2011 to 2017, even as oil and natural gas production in the basin increased by a combined 125% over the same period.

“Oil and natural gas producers across the Permian Basin continue to make clearly demonstrable progress toward managing methane emissions,” said Ryan Flynn, Executive Director of the New Mexico Oil and Gas Association. “Advanced technology and new infrastructure have allowed the environmental footprint per unit of production to shrink even as production has dramatically expanded.”

From 2011 to 2017, Permian Basin methane emissions from oil and natural gas production dropped from 4.8 million metric tons CO2e to 4.6 million metric tons CO2e. Over the same period, combined oil and natural gas production across the basin increased from 638.9 million barrels of oil equivalent to 1.4 billion barrels of oil equivalent.

Emissions data is collected and compiled through the EPA’s Greenhouse Gas Reporting Program, sourced from more than 8,000 facilities nationwide. Production data and rankings are compiled and produced by the Energy Information Administration, an independent agency within the United States Department of Energy.

“We want to capture as much methane as possible, and it’s a priority for the oil and gas industry in New Mexico to continue to take the lead in reducing emissions through responsible operations and innovation. Despite the repeated distortions offered by extreme activists, producers are proving that it’s possible to increase production and reduce emissions at the same time,” added Flynn. “The result is a win-win—good for business and good for our environment.”

New Mexico is the third-largest producer of oil in America and is experiencing record expansion and growth driven by the burgeoning Permian Basin. Oil production in the state climbed 46% in 2018 to a record 250 million barrels of oil, while natural gas production is at a ten-year high of 1,488,471 Million Cubic Feet in marketed production. The New Mexico Tax Research Institute reports that New Mexico’s general fund and public schools are also benefitting from considerable increases in oil and natural gas taxes and revenues. Total industry contributions to the state in Fiscal Year 2018 totaled $2.2 billion, including $822 million in funding for public schools and nearly $241 million for the state’s universities, colleges, and other higher education institutions.

Based in Santa Fe, New Mexico, the New Mexico Oil and Gas Association (NMOGA) represents the hard-working men, women, and families of the oil and natural gas industry in New Mexico. NMOGA is dedicated to promoting safe and responsible energy policies, while strengthening New Mexico’s economy and ensuring a bright future for our state’s children.