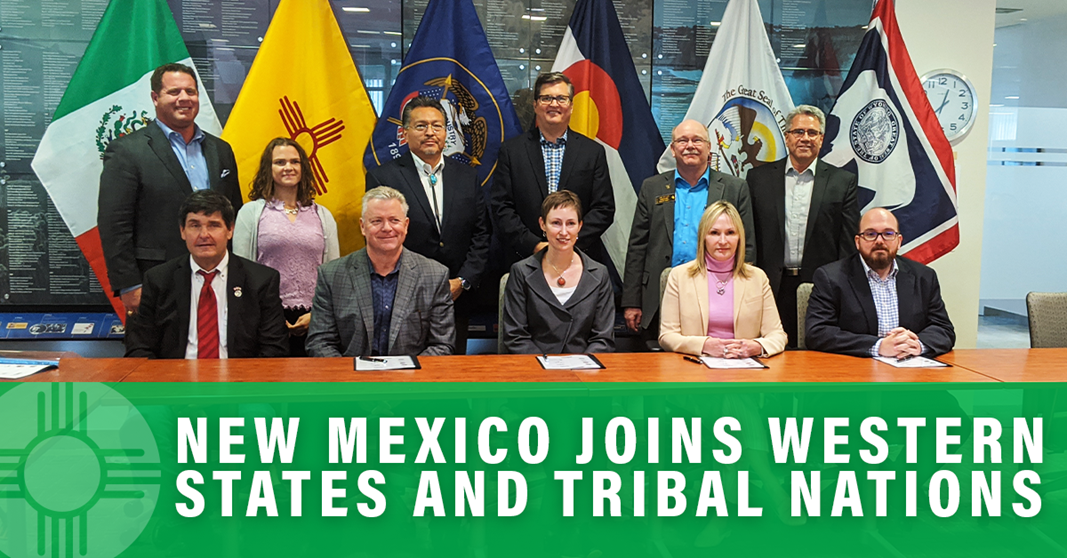 WSTN is a unique international initiative led by sovereign tribal nations, states and counties, and demonstrates that seeking a balance between energy and environmental goals can be a bipartisan effort.

“The Energy, Minerals and Natural Resources Department is pleased to represent New Mexico today in joining the Western States and Tribal Nations initiative,” Energy, Minerals and Natural Resources Department Cabinet Secretary Sarah Cottrell Propst said. “Supporting rural economic development in New Mexico is a priority for this administration and we look forward to working with this diverse coalition to find new markets for our energy.”

WSTN advocates for rural economic development, tribal self-determination and a cleaner environment by supporting Asian export market development for liquefied natural gas sourced from producing basins in western North America, as well as efforts to build the infrastructure to connect those basins to the export supply chain.

“The unique configuration and membership of WSTN, an organization founded and led by sovereign tribal nations, states and counties, gives it an authority that transcends many typical energy discussions because its purpose is elevated by the goals and the environmental stewardship of its members – the western governments,” said Andrew Browning of Western States and Tribal Nations.

Bryan Hassler, Executive Director of the Wyoming Pipeline Authority, added: “The addition of New Mexico to the Western States and Tribal Nations strengthens the alliance by aligning our mineral interests in a more unified front to promote the export of the abundant resources our states are blessed with.”

New Mexico’s joining creates the potential for other export avenues for the San Juan and Permian basins, especially after the State of Baja California, Mexico, became part of WSTN in August. Already, WSTN is pursuing export options for the Piceance and Uinta basins in Colorado and Utah, and Wyoming’s Green River basin.

"We are proud to welcome New Mexico to Western States and Tribal Nations as we continue to advance regional and international partnerships to build new market access to sustainably meet the world's growing demand for energy," said Laura Nelson, the Utah Governor’s energy advisor and executive director of the Governor’s Office of Energy Development. "Our strengthened collaboration will yield unparalleled outcomes for economies, environments and citizens locally and globally."

“The Ute Tribal Business Committee welcomes the arrival of New Mexico, a state that understands how energy production that can support tribal self-determination and rural economic growth can exist while maintaining stewardship of our environment here and across the world,” said Shaun Chapoose of the Ute Tribal Business Committee. “As North America’s original guardians of the environment, we are encouraged by allies like this who see the greater value in balancing important priorities that are too often portrayed as incompatible.”

Baja California is supporting plans to build LNG export capacity on its Pacific coast, with an eye on growing Asian markets that want to replace higher-emitting fuel sources with a stable, long-term LNG supply. WSTN is also supporting the proposed Jordan Cove LNG terminal in Coos Bay, Oregon, which has a similar aim.

Rio Blanco County Commissioner Jeff Rector commented: “We have to have the courage to keep trying and continue to stand up for our country. The greatest barrier to success is the fear of failure, and we as the counties, states and tribal nations are in the best position to advocate for what we need to grow our economies and help the global environment.”

WSTN was formed after the release of a report in April 2019 entitled “Natural Gas Markets for the Western States and Tribal Nations”, which identified the economically and environmentally transformative opportunities that will come from connecting stranded western North American gas to Asian LNG customers.

About Western States and Tribal Nations