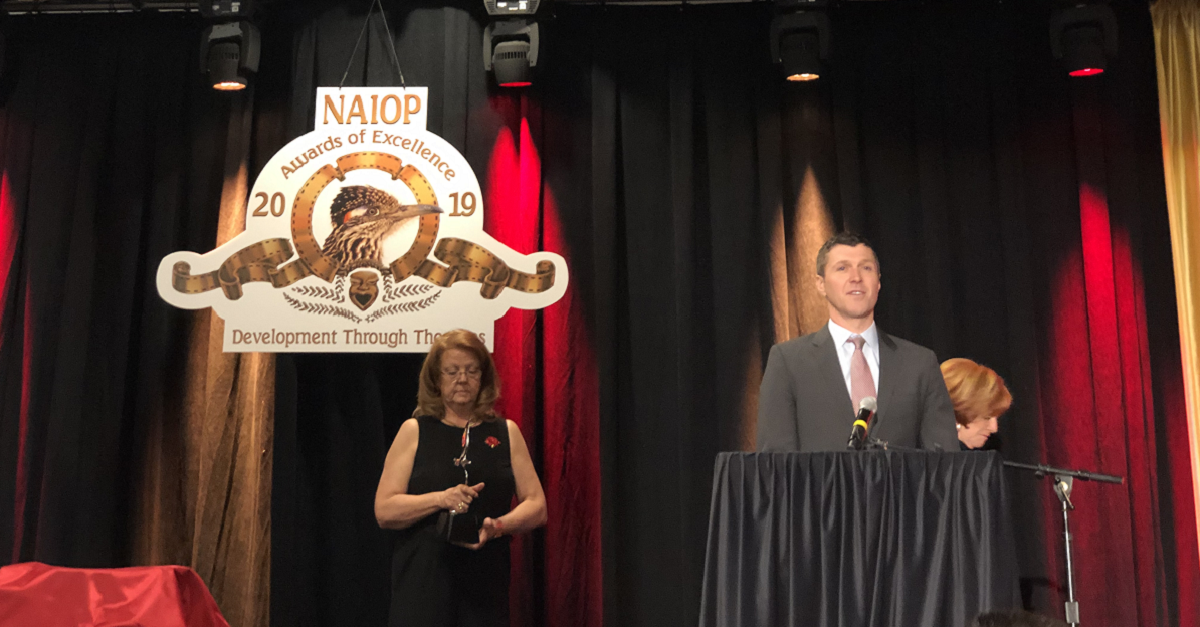 For years, NAIOP’s Chuck Gara Community Leader Award, one of the highest honors at the commercial real estate group’s annual Awards of Excellence event, was given to an individual from New Mexico’s business community who exemplified the longtime real estate professional’s leadership and generosity.

“It was a recognition of the kind of man Chuck was,” said Lynne Andersen, president of NAIOP.

This year, however, the awards committee took a different approach. Rather than singling out an individual who led the state forward, the award was presented to the New Mexico Oil and Gas Association as an organization. Andersen described the choice as a way of honoring the economic and philanthropic contributions of the state’s entire booming oil and gas industry. She described the industry as sometimes overlooked and denigrated by state and local officials.

“There is this industry that helps New Mexico work,” Andersen said. “And without them, we would be in a world of hurt.”

Over the last several years, new extraction technologies have helped make the Permian Basin, spanning much of West Texas and southeastern New Mexico, one of the most productive oil fields in the world. The changing industry has reshaped communities in New Mexico’s southeastern corner, while providing a massive wave of new funding for state programs. According to new revenue figures from the state, New Mexico legislators will have an estimated $797 million in “new” money available in the budget year that starts July 1, which has been driven heavily by growth in the oil and gas industry. Oil and gas revenue now makes up about 38% of direct state revenue collections, and around 47% of all revenue sources, according to the Legislative Finance Committee.

Ryan Flynn, executive director of the oil and gas association, said the industry has battled low oil prices for much of the year, but infrastructure advancements have helped the boom persist.

“It’s a testament to the resiliency of the industry,” Flynn added.

Flynn said the industry has learned from prior boom-and-bust cycles, and has prioritized improving communication and support in communities feeling the effects of the growth, as well as in cities like Albuquerque that are farther away from the oil fields.

NMOGA launched the Brighter Future Fund in September, which allows the association to provide grant funding to nonprofit and educational organizations in other parts of the state. NMOGA and the American Petroleum Institute have committed $1 million to the fund through 2024, and the fund will distribute $200,000 annually.

“So many of the people in our industry, they give for the purpose of giving,” Flynn said.

The awards ceremony also honored contributions from technology giants in and around Albuquerque.

The Chairman’s Award, which is designed to honor the project deemed to have the most impact on the physical and economic development environment of the state, went to Facebook’s massive $1 billion data center project in Los Lunas. The first building in Facebook’s planned six-building complex was completed in February. The data center complex is expected to be complete by 2023, and is expected to be home to more than 150 employees and contractors.

Additionally, NAIOP announced that the incoming 2020 chair of its board of directors will be Joe Farr, founder and president of Duke City Commercial. Farr has been a licensed real estate broker in New Mexico since 1994. Farr replaces outgoing chair Debbie Harms, of NAI Maestas and Ward.

Andersen praised Farr, noting that he brings a unique blend of private-sector experience and focus on economic development initiatives.