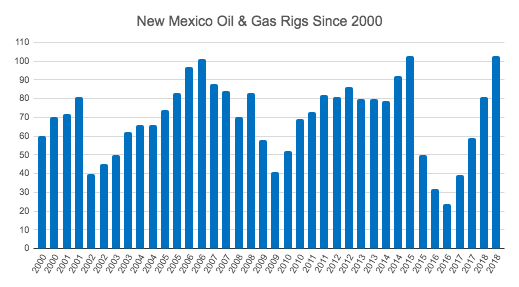 “More rigs equal more jobs and more revenue for our state. New Mexico’s flourishing oil and gas industry is benefits all New Mexicans, helping us invest more in quality public schools, essential roads and highways, and critical law enforcement,” said Ryan Flynn, Executive Director of the New Mexico Oil and Gas Association. “As the foundation of our state’s economy, we are poised to help New Mexico and our children thrive. That’s why it’s so important – to our kids, teachers, and police officers – that New Mexico remains a favorable place for oil and natural gas producers to do business.”

New Mexico’s latest rig count has now topped the 100 rig mark for the first time since January of 2015. Of the 103 active rigs operating in New Mexico, 101 are located in the flourishing Permian Basin in Southeast New Mexico, while two rigs are active in the Northwest’s San Juan Basin. Rigs are a leading indicator of future production and are an important measure of oil and gas activity and investments in any region. On average, one active rig employees 50 or more workers. At the current rig count, rigs in New Mexico would conservatively account for at least 5,000 jobs.

The news follows record-setting New Mexico oil production in 2017 that also saw the state climb to the third-largest producer of oil in the United States, behind Texas and North Dakota. New Mexico’s state finances have rebounded on the strength of oil and natural gas production. State economists told lawmakers during the recently-concluded legislative session that the state was on track to surpass current annual spending with $600 million in “new” money, mostly driven by gains in market prices for oil and increased production in the Permian Basin.

New Mexico’s gains are also helping the United States make a statement on the global energy stage, as a recent report by the International Energy Agency (IEA) says that prolific production in the Permian Basin is poised to push the United States to become the world’s biggest producer of oil production next year. IEA previously forecasted that daily oil output in the basin will double by 2023, dominating growth in United States oil production for the near future.

New Mexico is one of the United States’ leading producers of energy, ranking 3rd in oil production and 9th in natural gas. Revenue from oil and natural gas royalties, taxes, and fees is the single largest source of revenue for New Mexico, totaling $1.742 billion last fiscal year, including $711 million in funding for public schools and nearly $223 million for the state’s universities, colleges, and other higher education institutions.

For Information about the Baker Hughes Weekly Rig County:

For information about the International Energy Agency:

Based in Santa Fe, New Mexico, the New Mexico Oil and Gas Association (NMOGA) represents the hard-working men, women, and families of the oil and natural gas industry and communities in New Mexico. NMOGA is dedicated to promoting safe and responsible energy policies, while strengthening New Mexico’s economy and ensuring a bright future for our state’s children.