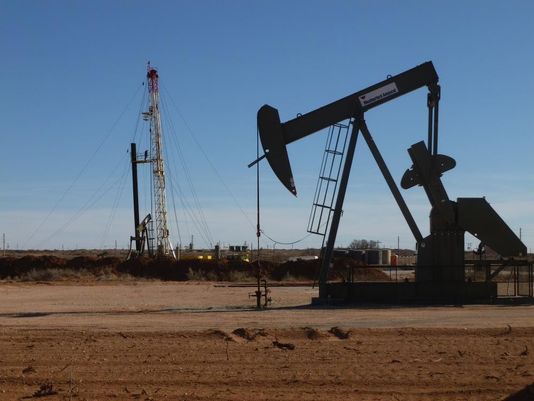 NASDAQ reported this week that West Texas Intermediate (WTI), a grade of crude oil used as a bench mark for domestic oil pricing, was valued at about $45 per barrel.

That was almost a $10 drop from about $55 per barrel in January.

Prices peaked at about $76 per barrel in the fall, but the sharp decline began almost immediately.

By winter, WTI was trading at less than $50 per barrel.

The downward trend in prices could dissuade some companies from developing in oil-producing regions until prices rebound, but operations in New Mexico continued to grow.

Earlier this year, New Mexico reported 110 active drilling rigs, the most ever in the state. As of Thursday, Baker Hughes reported 106.

Robert McEntyre, spokesman for the New Mexico Oil and Gas Association, said the ongoing development is a sign that oil producers remained optimistic about plays in the Permian Basin in southeast New Mexico and West Texas.

McEntyre said the supply is there, and prices will likely begin rising again by the middle of 2019.

“We still continue to see high levels of production,” he said. “They continue to hold steady and hang around record levels. That bodes well for the industry and the state. You can always make a sure bet that prices will go up and down.”

He said he expects prices to return to 2018’s peak as more pipelines are built the industry creates more carry capacity to bring the product to market.

“If producers weren’t optimistic, they would pull back their operations,” McEntyre said. “Rigs and drilling are up.”

Aside from issues specific to New Mexico, McEntyre said the price drop was influenced by growing tensions between the U.S. and the Organization of the Petroleum Exporting Countries (OPEC).

OPEC isn’t following previously stipulated production cuts, adding more foreign oil to the market and driving down the value of oil produced in the U.S.

“There’s a little bit of skittishness among oil producers that OPEC is not making the production cuts,” McEntyre said. “Traders are waiting to see how production bears itself out.”

For now, he said New Mexicans should take solace in the increasing production despite historically low prices, as the state is predicted to produce 200 million barrels or more by the end of the year.

“We operate in a global market. Oil is a global commodity,” he said. “Looking at production and rig count is the best indication of where things are going in New Mexico.”

But across the country, the lower prices could be trouble for oil producers outside the Land of Enchantment.

Kathleen Sgamma, president of the Western Energy Alliance, said the drop in value could cause producers in plays “less oil-rich” than the Permian Basin to delay expanding.

She pointed to operations in the Bakken region of North Dakota which could slow down due to the low pricing.

“I wouldn’t say this is another bust. It’s a price signal,” Sgamma said. “There will be some activity falling off. It depends on the area and the company.”

There is hope for the industry, she said, as the last major bust in prices in 2015 – when WTI tumbled from about $120 to as low as $30 per barrel in about a year and a half – caused companies to get smarter.

New technology and other cost-saving practices such as horizontal drilling pushed down many companies’ break-even point, meaning operations remained profitable at a lower price per barrel.

“During the last downturn, companies got very efficient,” she said. “There are still some areas where it’s economical to operate at $45 (per barrel).”

And the supply of American oil showed no indication of running out, she said, creating supply potentially higher than current demands.

“American producers keep finding more and more,” Sgamma said. “It’s a commodity business. If you have too much supply, prices go down.”