New Mexico Partners with Oil and Gas Industry to Curb Flaring, Activists Call for its End 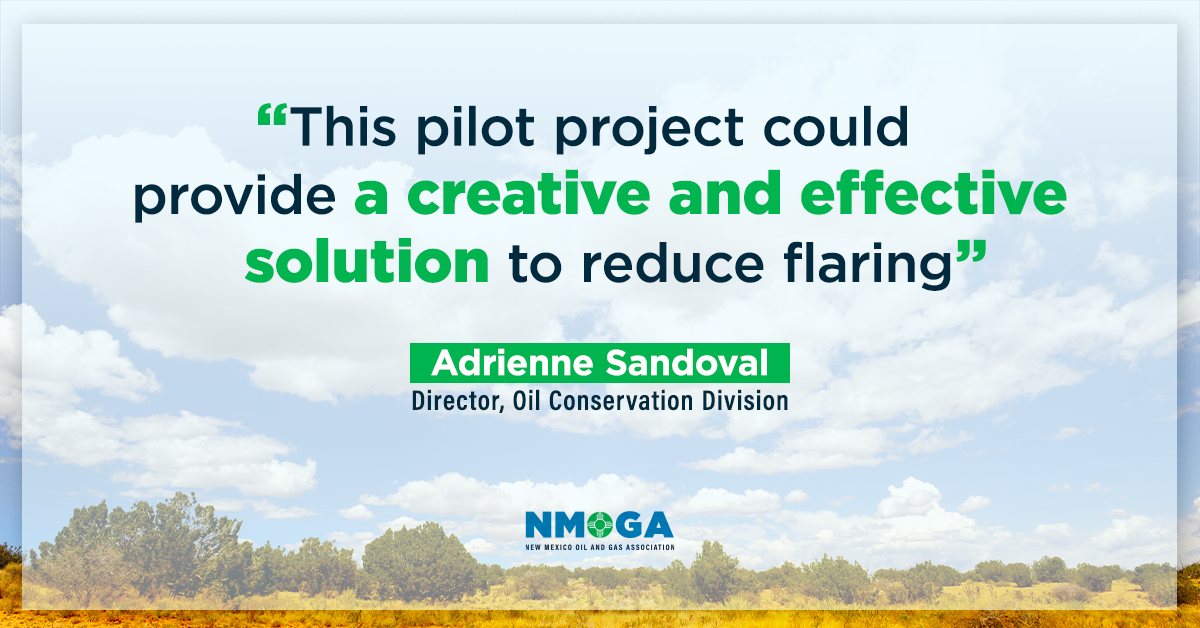 New Mexico could be closer to a solution aimed at reducing the use of flaring in its oilfields through a partnership with one of the Permian Basin’s major operators.

Flaring, or the burning of natural gas associated with oil extraction, became controversial as environmentalists argued it wasted a valuable resource and creates air pollution while industry leaders contended the practice was an essential activity in operations to safely pressurize wells and eliminate waste.

The project addressed temporary shutdowns of third party pipelines at a time when operations throughout the industry were curtailed due to shrinking fuel demand and oil prices amid the COVID-19 pandemic.

Gas was looped back into active wells during an outage instead of flaring it and reintroduced the gas back into the system when pipeline operations were restored.

The project marked the first time any such technology was used in New Mexico and could not only reduce flaring but allow the captured gas to return to production and be sold instead of released into the atmosphere through flaring.

Adrienne Sandoval, director of the OCD said cutting flaring was a major goal of the Division, and the State intended to work with industry leaders to develop solutions.

“EOG’s successful trial of this pilot project could provide a creative and effective solution to reduce flaring in the oil and gas industry, which is a top priority for this administration.”

EOG Chief Operating Officer Billy Helms said the company was “committed” to reducing greenhouse gas emissions created by the industry and partnering with the state to develop solutions to protect the environment while making operations more cost-efficient.

“EOG is committed to reducing greenhouse gas emissions from our oilfield operations, and we are grateful for the opportunity to collaborate with the state to develop technologically-innovative projects that both support economic growth and environmental stewardship,” Helms said.

“We commend the administration’s efforts, and we look forward to proactively working together on future projects.”

A report from energy research firm Rystad Energy said carbon dioxide (CO2) emissions related to flaring could see a record low levels in the Permian Basin by the end of 2020, as production continued to slow to meet lower market demand.

While the average level of CO2 at about 8 kilograms (kg) per barrel of oil produced in March, the report estimated it could drop as low as about 4 kg of CO2 per barrel by November.

“In (the second half of 2020) a material part of Permian oil production is being curtailed, resulting in an abnormal oil production decline that is supporting emission intensity at a level of 7–8 kg CO2 per barrel, despite continuous deceleration in flaring,” said Artem Abramov, Rystad’s head of shale research.

“However, assuming that most volumes are brought back in 2H20, we anticipate a significant downward shift in flaring-driven emission intensity.”

Most of the Permian’s flaring occurs near the Texas-New Mexico border within the Delaware Basin – a western region of the Permian – in Loving and Reeves county in Texas and southeast New Mexico, the report read, with “very little” flaring in the Midland Basin region in the eastern portion of the Permian.

In 2018 alone, Texas producers flared about $749 million in natural gas, read a report from the Institute for Energy Economics and Financial Analysis which called on the Texas Railroad Commission to enact regulations to curb the practice and ultimately stop it altogether.

“In the aftermath of the oil price collapse of the 1980s, the same bumper sticker could be seen all across Texas: ‘Please, God, give us one more boom. We promise not to piss this one away.’ In the current price collapse and anticipation of a boomlet, prayer has been abandoned and the industry is burning surplus gas to prop up oil and gas prices. It is not working,” the report read.

The Commission heard concerns from environmentalists and industry leaders regarding flaring regulations during a Tuesday public hearing and discussed some reforms the state could make to curb the use of flaring.

Such proposals included reducing the time an administrative approval can be provided for flaring by half, along with efforts to increase clarity on data submissions related to flaring provided by operators.

“I am very concerned by the rate of flaring in Texas,” said Railroad Commission Chairman Wayne Christian. “We cannot continue to waste this much natural gas and allow the practice of flaring to tarnish the reputation of our state’s thriving energy sector to the general public and investors on Wall Street.”

But environmentalists chided the Commission for not doing enough in combating the practice of flaring, a process many considered wasteful and dangerous to the environment.

Colin Leyden, director of regulatory and legislative affairs at the Environmental Defense Fund said the Commission should make it a goal to stop flaring by 2025.

“The unnecessary waste and pollution from routine flaring is an affront to the values we all hold true,” Leyden said. “That’s why you hear everyone from mineral owners, investors and environmentalists, to oil and gas companies themselves, calling for an end to flaring.”