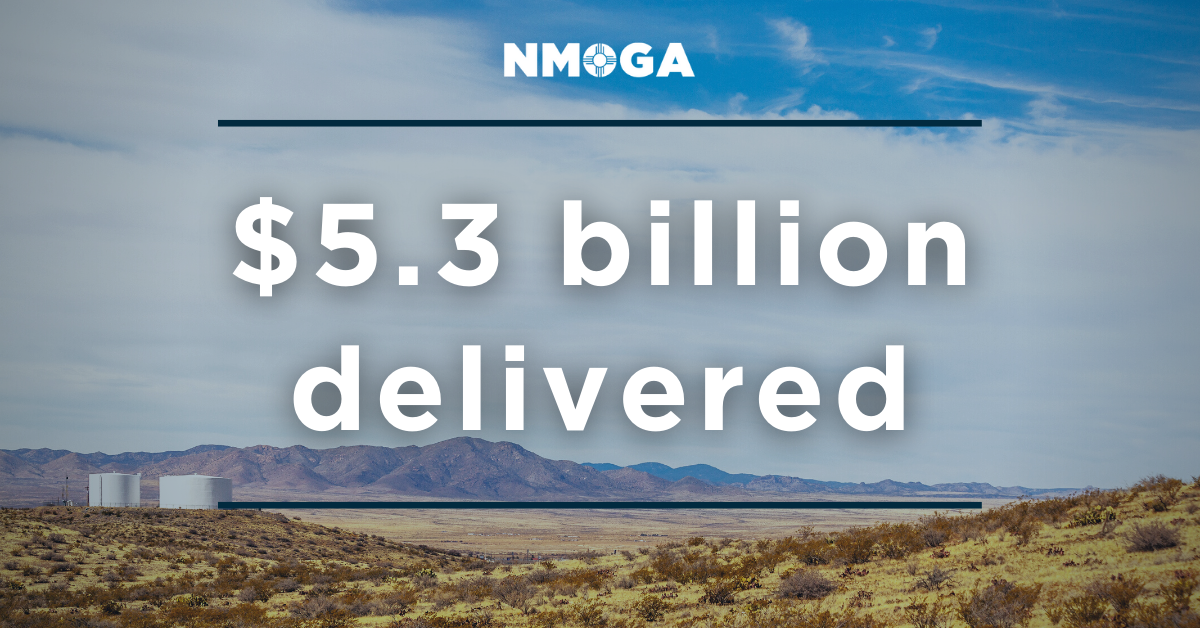 The oil and gas sector pumped a record $5.3 billion into New Mexico’s state and local governments in fiscal year 2021, according to a report the industry praised and critics bemoaned as further evidence of the state’s fossil fuel dependence.

While the governor and some lawmakers have promoted plans to shift the state toward renewable energy in the coming decade to combat climate change, industry executives contend oil and gas will remain a huge revenue source for New Mexico in the foreseeable future.

They pointed to the report by the New Mexico Tax Research Institute as proof.

“Historic revenue equals historic opportunity, and that is great news for teachers and students, critical first responders and health care workers, and each and every New Mexican across this state,” Leland Gould, CEO of the New Mexico Oil & Gas Association, said in a statement.

“For years, New Mexico has cemented itself at the center of the domestic oil and gas production, and the investments being made in our state are paying off in a big way,” Gould added.

Production showed a 37 percent increase over fiscal year 2020, when the market slumped with falling oil prices, putting almost $3 billion into the state’s general fund this year — an amount comprising more than a third of that fund, the report said.

In all, the industry added $1.3 billion to education across the state, which is almost a third of the operating budgets, the report said.

The production surge enabled New Mexico recently to surpass North Dakota and become second in the nation behind Texas.

One industry group that lauded the report’s findings also took a defiant tone.

“These results are made possible by the hard-working men and women of New Mexico’s energy industry, and they deserve nothing but our gratitude,” Larry Behrens, a spokesman for Power for the Future, said in a statement. “The fact that record revenue is delivered in the midst of a pandemic and hostile leadership at the state and national level speaks to the resilience of New Mexico’s energy workers.”

The report indicated the industry is generating its highest tax revenue amount since at least 2014. And it’s more than double the sum of 2016, when the market suffered its most severe downturn in the past decade.

The fluctuations over the years show how volatile the market can be. That has led activists, state leaders and a few economists to call for creating more stable revenue sources — which includes diversifying the economy — to wean the state off what they say is fossil fuel dependency.

Gov. Michelle Lujan Grisham, a Democrat, has applauded the industry for the dollars it puts into New Mexico’s economy, but she also promotes diversifying the state’s industries and moving toward renewable energy to cut greenhouse gases.

“The governor has prioritized diversifying New Mexico’s economy since her first day in office,” Lujan Grisham’s spokeswoman Nora Meyers Sackett wrote in an email. “Economic diversification is absolutely critical as New Mexico continues to grow and adapt to a changing climate, which the governor has led the charge on.”

In a July letter, 16 education, community and conservation groups asked the governor and state lawmakers to establish new revenue streams for schools so New Mexico isn’t overly dependent on oil and gas dollars as the industry faces a sweeping energy transition to counter climate change.

This week, 240 educators signed a letter sent to the Oil & Gas Association, asking the group to stop using images of teachers and students in ads touting how the industry benefits them and how efforts to curb production and pollution will harm education.

“They’re trying to give the impression that all New Mexico educators unquestionably support the industry — that’s just not the case,” said Charles Goodmacher, who helped organize the campaign.

Goodmacher said most educators with whom he has spoken are conflicted about a funding source that won’t be sustained in the long run, and one that comes from an industry “eroding the future of our students” with climate-warming pollutants.

One economist said the boom-and-bust cycles of the market make for unreliable funding, and that the state should look to other types of taxes.

“We need to do something to lessen our dependence for oil and gas revenue for the state,” said Jim Peach, a New Mexico State University economics professor emeritus. “It [revenue] bounces all over the place in response to the price of oil.”

Creating a value added tax on goods and services, allowing a sales tax on groceries and increasing the fuel tax — for the first time since the early 1990s — are some of the ways to at least partially replace fossil fuel revenues, Peach said.

State Rep. Patty Lundstrom, D-Gallup, said this latest report reaffirms that oil and gas revenues are an integral part of the state’s budget.

“I mean, no question,” Lundstrom said. “We talk a good game about diversification, but I don’t see anything on the immediate horizon that could replace their contribution into our budget process.”

Lundstrom, who heads the House Appropriations and Finance Committee, acknowledged the fossil fuel sector is volatile and noted the state’s budget took a sizable hit when oil prices fell.

Relying too much on a single industry is a valid concern, but transitioning away from it must be done gradually, Lundstrom said.

“I don’t see where you can pull a switch and we’re diversified,” she said. “It’s going take time, and it’s going to take a lot of good, strong planning — and a lot of business-friendly initiatives.”