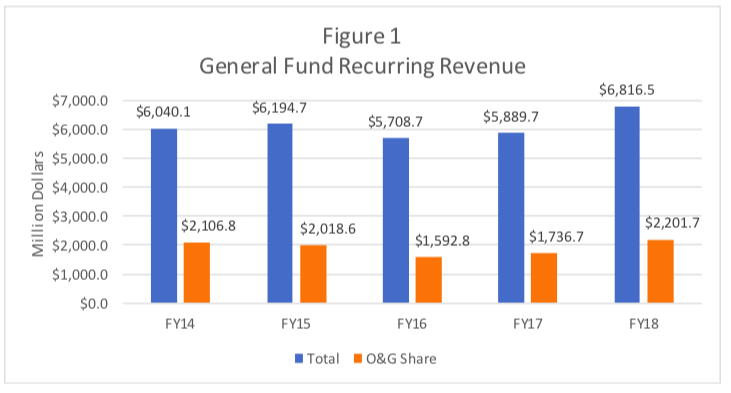 In addition to General Fund revenue, oil and gas revenue provided an additional total of $1.55 billion to State and Local budgets in FY18. The larger components of this amount are listed below:

➢  $493 million of Oil and Gas Severance Tax payments, the bulk of which are used for capital outlay spending with a remainder going to the Severance Tax Permanent Fund;

➢  $99 million of Land Grant Permanent Fund distributions to beneficiaries other than the State General Fund.

As in prior versions of this report, estimated revenues attributable to oil and gas production are the authors’ calculations based on various reports from state government and are limited to amounts that can be tied directly to industry activity. The estimates do not include the potential “multiplier” effects of the industry on, for example, household spending by employees or business purchases and net income of suppliers to the industry. Thus, the aggregate amount attributed to the industry in this report represents a conservative estimate of the total state and local revenue and spending attributable to the industry.

Table 1 presents FY18 General Fund recurring revenue attributable to oil and gas production. The methods for determining the oil and gas share are described below. For information on the methodology for revenues not discussed below, see previous versions of this report. The majority of the increased revenue came in the form of higher excise taxes on production, and in higher royalty payments from production on federal lands. Significant additional amounts were received from Gross Receipts Tax (GRT) collections from service providers to the industry, State Land Office rental and bonus payments, increased distributions from both Permanent Funds and Corporate Income Tax payments. Appendix 1 provides a comparison of these results with those from FY17. 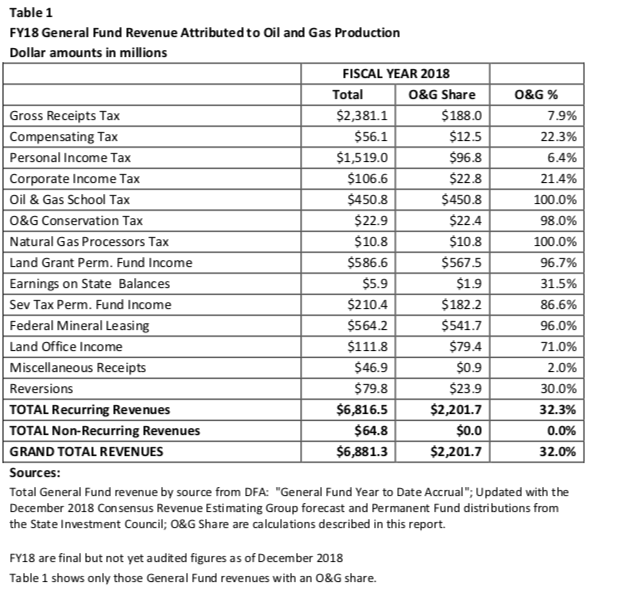 As in previous versions of this report, the Gross Receipts Tax (GRT) share attributable to oil and gas production was estimated in a two-step process using two different reports published by the Taxation and Revenue Department (TRD) that identify the share of GRT attributable to various industries. At the time they register to pay the GRT, taxpayers are asked to choose one of the North American Industry Classification System (NAICS) categories that best characterizes their business. TRD’s RP-80 report breaks down the GRT base as reported on monthly or quarterly tax returns into the most granular 6-digit NAICS categories available. This report was used to determine how much of the GRT due to the larger 2-digit NAICS sectors is attributable to the oil and gas related businesses. Appendix 2 presents the 6-digit industries that were used to calculate the oil and gas share of the tax base.

In the second step, the oil and gas share of large industry groups was applied to the total tax liability of each group as reported in TRD’s RP-500. Table 2 presents the resulting share of the 2-digit industries calculated in this step. 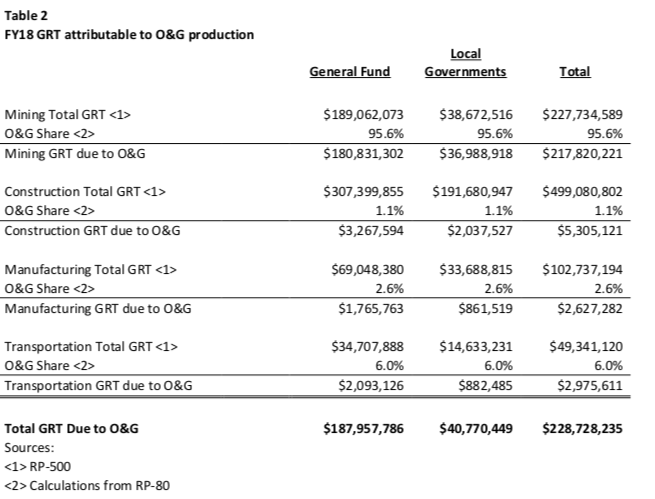 The estimated $188 million GRT attributable to O&G operations represents an increase of $84 million, or 81 percent compared with FY17. This is attributable to the sharp jump in drilling activity in New Mexico during FY18 as illustrated in Figure 2. After plummeting to less than 20 active rigs at the end of FY16, the rig count began a dramatic increase around the middle of FY17 that continued all the way through FY18 ending up at over 90 rigs by the end of that year. During this period Taxable Gross Receipts (TGR) in the Mining industry increased by an average of $200 million per month or $2.4 billion per year. On average, each rig was associated with an increase of $5 million dollars of TGR per month, which accounts for the sharp increase of General Fund GRT estimated in Table 2. 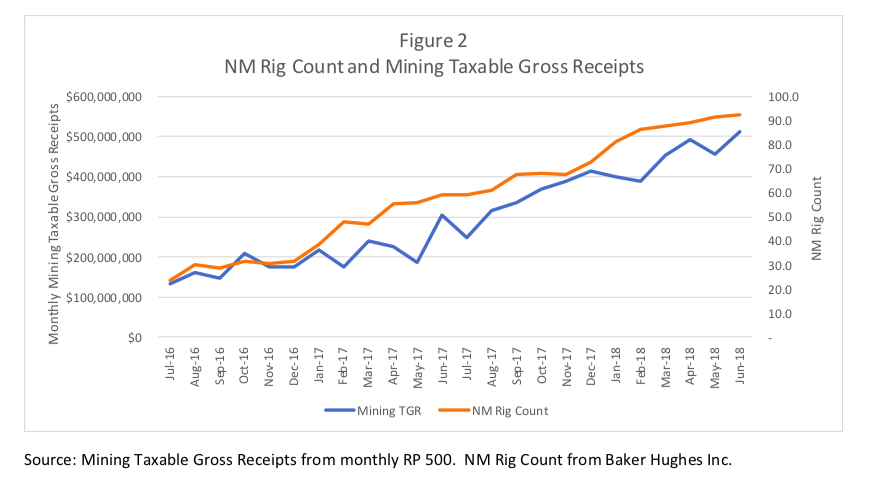 Personal Income Tax (PIT) revenue attributable to the O&G industry was estimated from two sources. TRD reports the amount of Withholding Tax paid by pass-through entities operating oil and gas producing businesses. This represents the income tax due from the owners of interests in oil and gas production. The total amount was $41.3 million in FY18.

PIT attributable to wages and salaries paid by the O&G industry in FY18 was estimated using data from the NM Workforce Solutions Department (WSD). WSD uses information from Unemployment Insurance reports to prepare a “Quarterly Census of Employment and Wages” (QCEW). The QCEW reports total employment and total wages by industry. For this report, two industries were included: Oil and Gas Extraction (NAICS 211) and Support Activity for Mining and Oil and Gas Extraction (NAICS 213). Since the latter group may include some non-oil and gas related activity, the total was reduced by 5 percent, which reflects the non-oil and gas share of the GRT base during FY18.

In the 2017 edition of the Tax Expenditure Report, TRD presented calculations showing that in tax year 2015, then the most recent data available, the Mining and Oil and Gas sectors paid a total of $65 million, or 22.5 percent of the total $290 million of Corporate Income Tax (CIT) paid by all industries. This share was reduced by five percent to reflect the oil and gas industry’s share using the share of total GRT paid by the industry. The result is a 21.4 percent share of total FY18 CIT. The State pays film credits out of CIT collections before transferring the residual to the General Fund. The allocation of Total CIT collections and the oil and gas share is shown in Table 4.

Table 5 presents education spending supported by oil and gas revenue in each county. Information from the Public Education Department was used to calculate countywide totals of State General Fund distributions to each school district and charter school. Information from the Higher Education Department was used to calculate countywide total State-funded distributions to institutions of higher education. The oil and gas share of this spending is the 32.3 percent of total General Fund revenue comprised of oil and gas revenue. 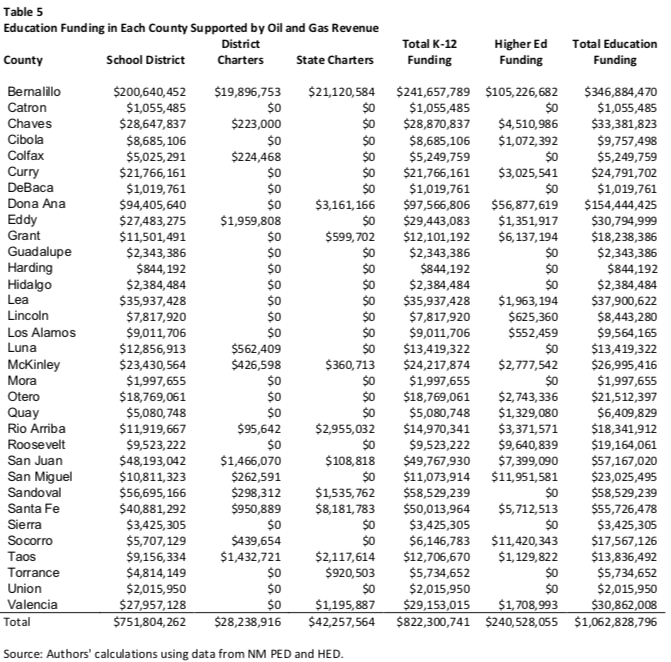 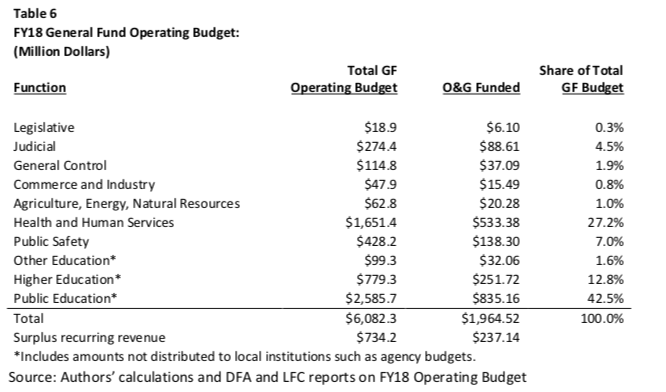 In addition to General Fund revenue, oil and gas production added $1.55 billion of tax, royalty and investment income revenue to other State funds and to local governments. Table 7 presents a breakdown of this amount. 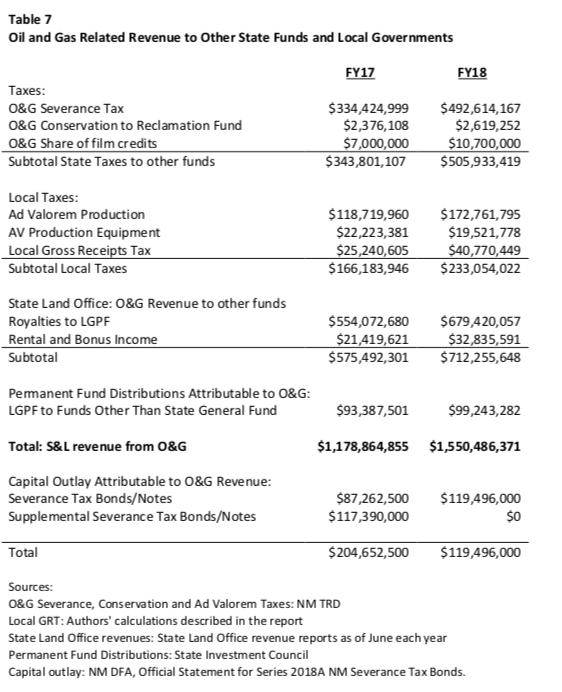 Capital outlay spending supported by oil and gas was about $119 million in FY18. This was lower than the typical amount due to budget-saving measures adopted in the previous budget making cycle.

The total marketed value of oil and gas produced in New Mexico increased to almost $16 billion in FY18, an increase of 47 percent over FY17. Both oil and gas prices were higher, as was gas production. The largest contributor to growth was the 33 percent increase in the volume of oil production, from 153 million barrels to 204 million barrels. Details are presented in Table 8. 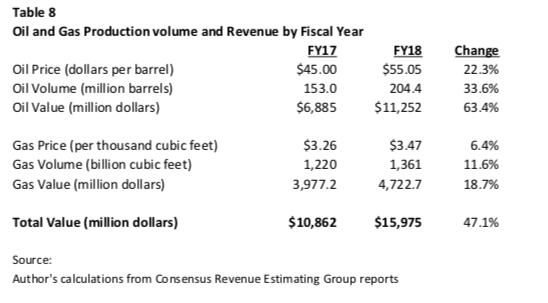 New Mexico collects several excise and ad valorem taxes based on the marketed value of production. Total collections from these taxes was $1.16 billion in FY18, an increase of $356 million or 44 percent from FY17. Table 9 summarizes these taxes. 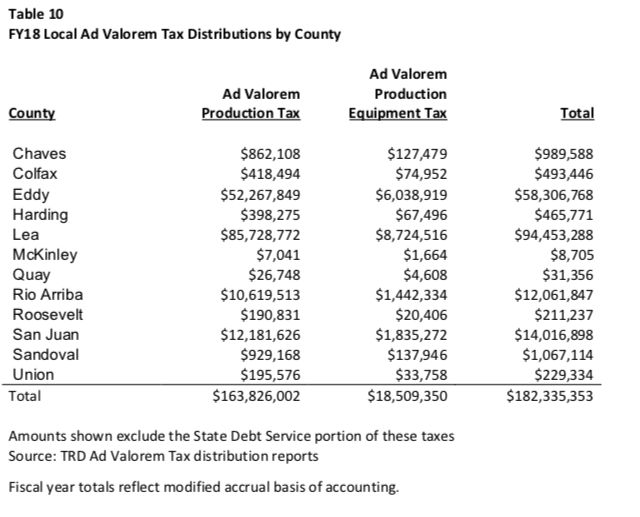 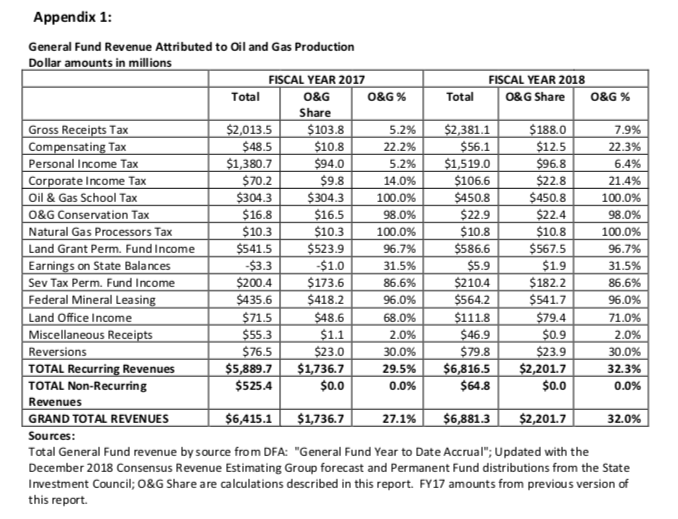 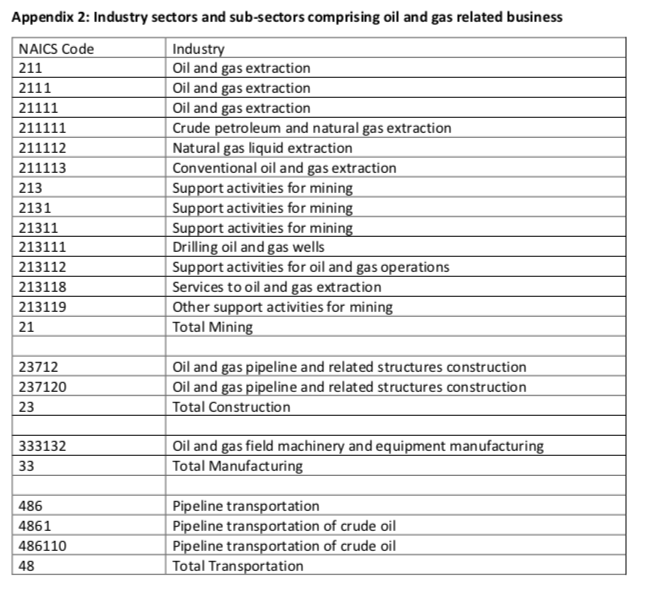