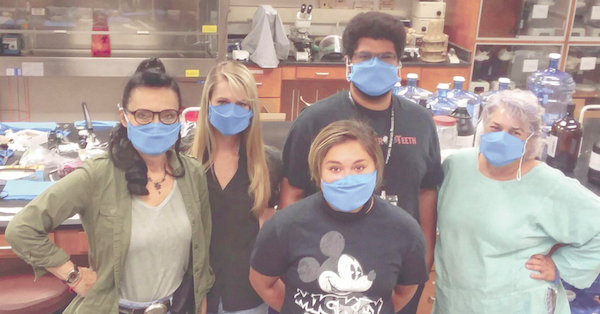 It started as a modest undertaking by New Mexico Tech biologists to supply the campus with enough hand sanitizer for all students, faculty, and staff. That was in March, and by the first week of June, hundreds of gallons have been produced.

“We’ve ramped it up,” research scientist Dr. Danielle Turner said. "In the beginning, we had first started making it for New Mexico Tech and were hoping to distribute to the Socorro community. As of Friday, we have distributed to half the state of New Mexico. And into Arizona.”

To meet the need, 733 gallons of the sanitizer have come out of New Mexico Tech’s Biology Department lab, using a specific formula developed by the World Health Organization.

When Turner found she was running low on the needed chemicals sooner than expected, another Tech body stepped up; Energetic Materials Research and Testing Center.

“We are lucky to be working with EMRTC, and Tom Pleva,” she said. “He’s been amazing. He has sourced the alcohol for us, and the hydrogen peroxide, and the glycerol.”

To date, 476 gallons of the sanitizer have been distributed to such far-reaching counties as Eddy, Hidalgo, San Juan, Taos and others, as well as the Gallup community and three Navajo communities withing the Nation Nation.

The effort is part of the NM COVID-19 Emergency Supply Collaborative, the joining of several federal, state, and local entities intended to connect New Mexico medical providers with solutions and capabilities from across the state. Turner is officially the supervisor and site coordinator at New Mexico Tech.

"It's basically a group of volunteers from various places in New Mexico where we try to connect people and healthcare providers with distributors for PPE, hand sanitizer, or other needs," she said. "It was encouraged early on by Governor Michelle Lujan Grisham, who sent some of her people down here for the first couple of weeks.”

The collaborative has brought together over a dozen agencies and departments, as well as the State of New Mexico and the Congressional delegation.

Who gets how much sanitizer depends on the need and the places that ask for it.

Requests in Socorro are generally steady at this point, Turner said, but throughout New Mexico, with some businesses beginning to open up again, she expects an increase in the need.

“Our community – Tech, Socorro, Magdalena and Alamo – is always our priority for distribution,” she said.

For local distribution, “Snezna (Dr. Snezna Rogelj) and I go out in her convertible and take it where it’s needed. The post office, police department, and so on,” she said. “For Alamo, we have been working with Michael Hawkes and Ken Wolfe from the County of Socorro.”

Locally, twenty-four different groups and agencies in Socorro County have received sanitizers and masks since the middle of March.

"We're focusing on those organizations that can't afford to purchase it," she said.

In addition to sanitizer, much needed face masks are also being mass-produced for the COVID-19 effort. Undergrads Ida Hernandez and Eric Bartlett have been making the masks “every day, five days a week in a separate area for the past six weeks,” Turner said. The NMT-designed facemask is made from microbe-impermeable surgical instrument sterilization wraps.

“These masks are a step up from your normal cloth masks,” she said. “They’re made of sterilization material, a polypropylene. It’s a really good filtration mechanism, as opposed to the cloth mask.”

The undertaking is coordinated by Department Specialist Vanessa Quiñones. “She’s in charge of the mask making and put together a nice instructional for them," Turner said. “She also cuts out the metal strips to go over the nose part of the mask. Her help is invaluable.”

The masks are made from two different patterns. A conventional folded style and a more effective “duckbill” covering. They come with two wear options, ear-loops and head-straps.

Thus far, well over 500 masks have been produced and donated.

“One more thing,” Turner said. “None of this would be possible without the support of President (Stephen) Wells. From the beginning, he has more than demonstrated the concern he has for the health of the students, the faculty, and the staff, as well as the community at large.”