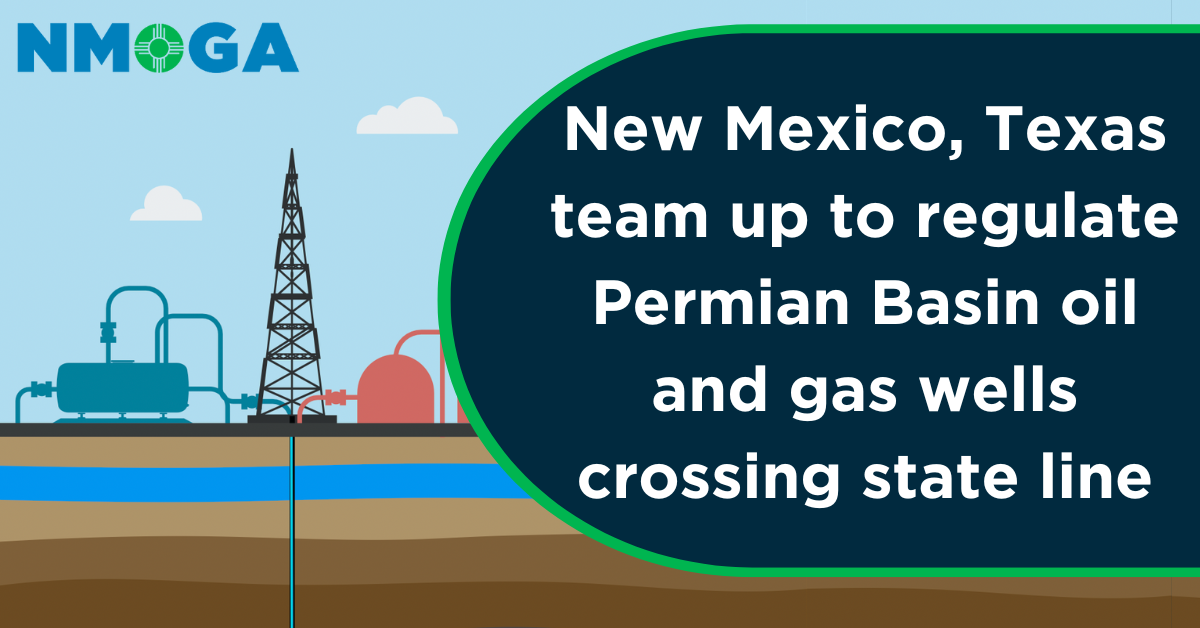 Oil and gas operations in the Permian Basin – shared by southeast New Mexico and West Texas – boomed in recent years with wells sprouting up around the state line between two states.

Wells even crossed state lines, being drilled horizontally from origin points in either New Mexico or Texas and stretching up to 10 miles across the border.

To ensure such wells follow regulations of both states, New Mexico’s Oil Conservation Division (OCD) and the Texas Railroad Commission (RRC) signed an agreement to regulate interstate oil and gas facilities in tandem.

A memorandum of understanding (MOA) was signed by the two regulators last month to require they both get adequate reporting and compliance from oil and gas operators that cross the state’s border.

It arose from a 2021 case where an operator sought to permit a cross-border well the OCD said required collaboration between the two agencies.

The MOA was intended to clarify how production from such wells would be allocated, along with permitting and reporting requirements across the two jurisdictions.

OCD Director Adrienne Sandoval said the deal was needed during record-breaking growth in oil production in the Permian Basin – now the U.S.’ most active fossil fuel region producing about 5 million barrels per day of the about 11 million barrels produced daily across the U.S.

Texas and New Mexico are the first- and second-largest producers of oil in the nation, largely driven by the Permian’s recent boom, which also brought the region’s oil and gas rigs to 344 as of Sept. 30, the highest among American shale basins and the only basin in the triple digits, per Baker Hughe’s latest report.

Texas was at 360 rigs, per the report, while New Mexico was at 113 rigs – also the only two states with triple-digit rig counts.

“This agreement is a landmark development between the two states holding the Permian Basin, America’s largest and most productive onshore oil basin,” Sandoval said.

She said the MOA’s need also arose from modern drilling techniques like directional drilling, which allows oil and gas producers to adjust the direction of wells, targeting harder-to-reach oil and gas deposits, rather than traditional methods larging drilling straight down.

“It effectively responds to unique development scenarios that have arisen due to modern drilling practices and the cross-border nature of the resource,” Sandoval said.

About 81 percent of drilled in the U.S. last year used horizontal drilling, per an April report from Energy Information Administration (EIA), with the distance increasing from an average of 7,300 feet in 2010 to 15,200 feet last year.

“Horizontal and directional wells are longer than vertical wells, allowing them to access more geologic formations that contain crude oil and natural gas, which increases those wells’ productivity,” the EIA report read.

Sandoval said the agreement with Texas’ RRC would ensure oil and gas drawn from New Mexico would not be wasted, despite an operations origin in Texas.

“We appreciate the partnership from our colleagues in Texas in reaching this agreement and want to emphasize that it includes appropriate safeguards to ensure that New Mexico resources are not wasted regardless of where producing facilities are located,” she said.

Under the agreement, production from wells that cross state lines will be allocated to either state on case-by-case basis based on the length of the well bore and mineral acreage assigned to the well in each state.

The operator of such a well will be required to report to each regulators the total production volumes of the well allocated to lands in each state.

Volumes of water produced during oil and gas production must also be reported to both agencies, per the agreement, along with any other state requirements.

Any environmental events, such as spills or release, will be subject to requirements of the state host to the affected land, read the agreement, along with surface requirements.

Andrew Keese, RRC spokesman said oil and gas was “vital” to both states and collaboration on regulating the industry in the busy and growing Permian Basin region was essential.

“The MOA helps coordinate regulatory responsibility of drilling, completion, production and other regulatory requirements of the cross-border wells,” Keese said.

“The oil and gas industry is vital to Texas and New Mexico and benefits the nation, and the MOA helps the development of each state’s resources in a responsible and efficient manner.”