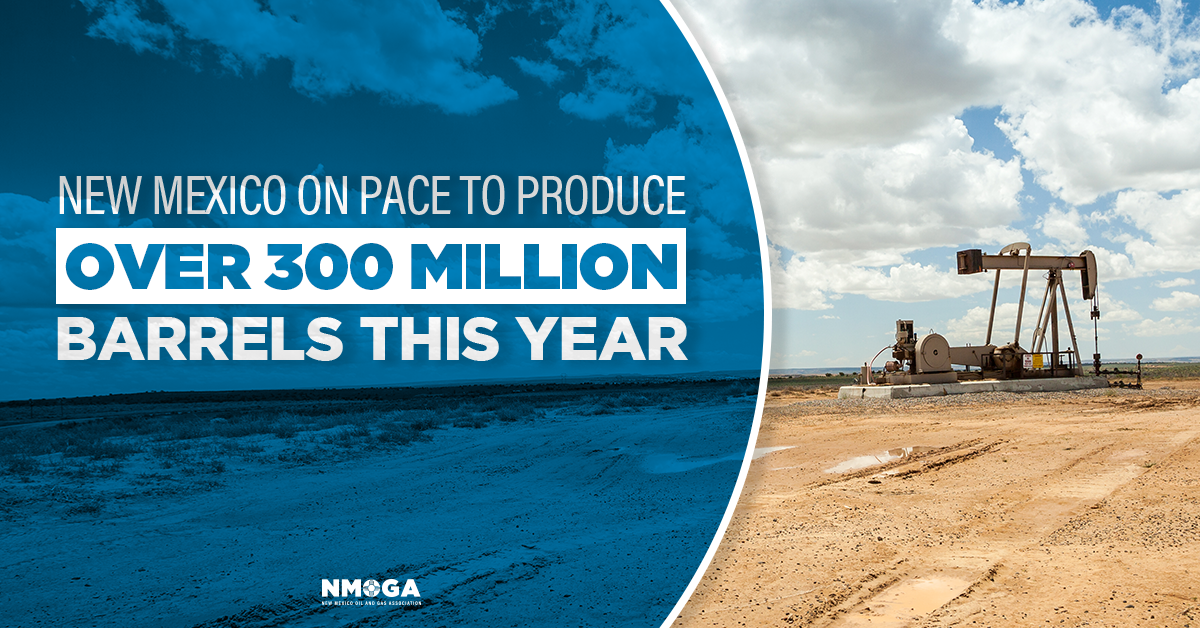 Oil production continues gushing in southeastern New Mexico and on pace for another blockbuster year.

“We anticipate over 300 million barrels this year,” Ryan Flynn, president of the New Mexico Oil and Gas Association, told the Albuquerque Economic Forum on Wednesday. “This will make three years in a row of record production. It’s truly unprecedented.”

Preliminary monthly production tallies by the state Oil Conservation Division do indeed show a huge increase in output during the first eight months of this year, up 36% compared with the same period in 2018 – itself a record year.

As of August, the latest month for which OCD estimates are available, production reached 209 million barrels of oil. That’s up from 153.5 million barrels during January-August last year, and it’s nearly twice the 108 million barrels reported for that same period in 2017.

Output in the Permian Basin has climbed steadily since 2012, when the industry began applying modern techniques of hydraulic fracturing and horizontal drilling to crack open hard shale rock formations. That’s allowed operators to tap into huge pools of hydrocarbons that they couldn’t reach before with conventional methods.

Output dipped slightly in 2016 to 146 million barrels, reflecting price volatility on world markets. But since then, it’s steadily surged to new heights.

And that, in turn, has flooded state coffers with an unprecedented wave of oil and gas revenue, generating $1 billion-plus budget surpluses in the last two years, Flynn said.

Given the oil industry’s historic boom-and-bust cycles, state officials remain cautious about the long-term prospects for sustaining production, especially with domestic oil prices hovering in the mid-$50 range, just a few dollars above the break-even point for most producers.

Drilling operations have slowed in other places in recent months, with active rigs declining by about 50 in Texas compared with last year, said Sen. John Arthur Smith, a Deming Democrat and chair of the Legislative Finance Committee. The rig count in New Mexico has remained steady, but production could slow down here in the coming months, he said.

“There are some troubling signs, and we need to be careful about how we spend oil and gas revenue,” Smith said. “We could see production levels flattening out in the fall.”

Still, the Permian has remained resilient even with low prices in recent years, thanks to continuous technology innovation by operators to lower costs and produce more efficiently, Flynn said.

To gauge sustainability, NMOGA contracted with global consulting firm ICF to study New Mexico production going forward. That led to an ICF report in September that estimates production could increase by another 300% over the next decade, generating about $8 billion in annual revenue for the state by 2030, Flynn said. That’s nearly four times more than the $2.2 billion the government collected from industry activities in fiscal year 2018.

“High production really is the new normal for the foreseeable future in New Mexico,” Flynn said. “The industry has consolidated around the Permian Basin and we believe production will remain at record levels.”

“All studies say that global demand for hydrocarbons will increase over the next decade,” Flynn said.

Government policies, however, pose a wild card that could disrupt industry growth, depending on the types of regulations imposed, Flynn said. Some industry opponents, for example, have called for outright bans on fracking and a stop to new drilling on public lands.

Flynn said those efforts are welcomed by industry, which wants to work with government and the public to find ways to lower carbon emissions without impeding industry growth. He praised Lujan Grisham’s administration for its “honest, pragmatic approach” to those issues, rather than embrace more extreme positions of production and fracking bans.

Flynn added that outright bans would actually harm the environment, because it would move production out of the U.S. to other countries where environmental controls are much weaker.

“There is no doubt that the oil and gas industry has been one of the primary economic drivers in the state,” Keyes told the Journal. “We all share in what is record production and the revenue that brings to our classrooms and public services.”

But the state must diversify the economy away from oil and gas.

“Some of those dollars have to be invested in economic development and growth industries such as value-added agriculture, aerospace, film and television, advanced manufacturing, and renewable energy so we can quickly add jobs and work towards an economy that builds wealth and is sustainable for all,” Keyes said.