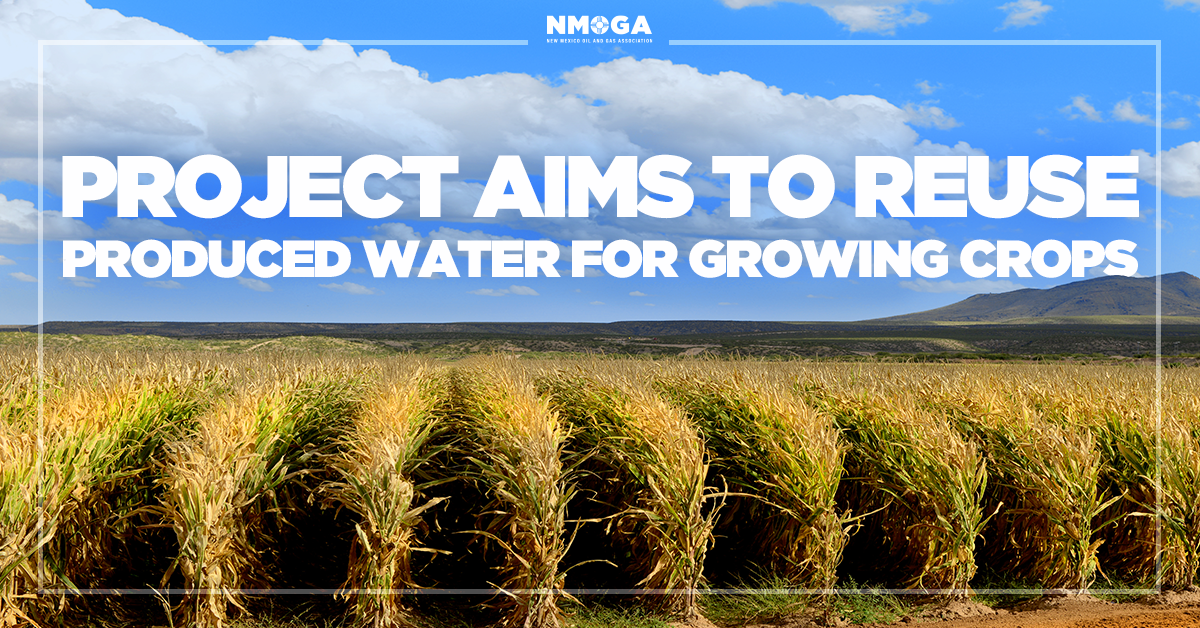 A Wyoming environmental company hoped to build a facility in Lea County to treat oil and gas waste water for reuse to water crops.

Hobbs-based Hungry Horse Environmental Services, which already provides environmental remediation services to the oil and gas industry, announced a license with Wyoming-based Encore Green Environmental which developed technology that could allow produced water from extraction operations to be cleaned and reused in agriculture.

Hungry Horse would provide the land for the project, in the heart of southeast New Mexico's Permian Basin oilfield, while Encore Green developed the technology.

Produced water, often viewed as waste created by oil and gas operations, is brought up from underground shale with crude oil and natural gas.

It often outnumbers the oil extracted, with up to 10 barrels of water produced per barrel of oil – about 42 gallons – and is often laden with toxic heavy metals and chemicals.

Last year, New Mexico Gov. Michelle Lujan Grisham announced an initiative that would see the State and New Mexico State University form a consortium to research reuse possibilities for produced water outside of the industry.

Many oil and gas companies already treat and reuse produced water within fracking operations, but Lujan Grisham hoped to expand the use of the water in water-scarce New Mexico.

“Turning this waste product into a commodity is good for preserving fresh water resources, good for compact requirements with other states, good for conservation purposes, good for local and county governments; it’s good for small and large producers, it’s good for agriculture,” she said in announcing the consortium in September.

“It’s good for New Mexico, and it represents an exciting leap forward.”

Hungry Horse Managing Member John Norris said the companies intend to work with New Mexico’s consortium, already preparing licensure as the research continued to set regulation on how produced water could be reused.

“Our goal is to get ready to put our produced water to good use once the Consortium announces the parameters,” Norris said. “Why wait until then to start figuring out the next step? We are licensing the ‘Conservation By-Design’ system to give our arid land the water it needs and to help the energy industry meet their ESG (environmental, social and governance) goals.”

How does it work?
Encore’s “Conservation By-Design” process would see the solar panels heat up produced water, creating steam which would turn a turbine, creating energy.

Then, the condensation left from the steam would be cleaned to a high enough standard to be used to water crops.

Any leftover brine would still be disposed for injection.

The process could be affordable to farmers, as they could accrue solar credit for adding to the electrical grid, while also collecting disposal fees from company’s supplying the waste water.

“We’re the world’s first agricultural midstream company and we’re excited to work with Hungry Horse to provide cleaned water to arid land,” Nash said. “If you do that, you get better soil, increased vegetation, and cleaner air through carbon sequestration. Re-purposing this by-product water creates a total ecological solution.”

As a member of the Consortium, Encore Green Environmental was included in discussions and research with the state, while developing its own “Conservation By-Design” system, read a news release.

Nash said oil and gas companies recently began embracing ESG principals in their operations, and by working with agriculture, those goals could be closer to reality.

It’s good that big energy companies are starting to talk about ESG, but the agricultural community has been always the leader of ESG, taking care of our land and doing things the right way. Now is the time for agriculture to take the lead,” Nash said.

“Agriculture is the perfect midstream partner because it can clean the water to match the soil and see tremendous benefits for not only the individual rancher and energy company, but for the whole environment as well. It’s truly a win-win.”

Nash said his company took a different approach that many companies by viewing oil and gas waste water not as a problem but a solution for struggling farmers.

Fracking could create billions of gallons per year of water that Nash said is often viewed as waste when it should be considered a valuable resource.

“We take a different position in that produced water is not bad,” he said. “There are constituents in that water that people are concerned about, but we’re smarter than those problems.”