NMOGA's Comments to U.S. Department of the Interior on Oil and Gas Program 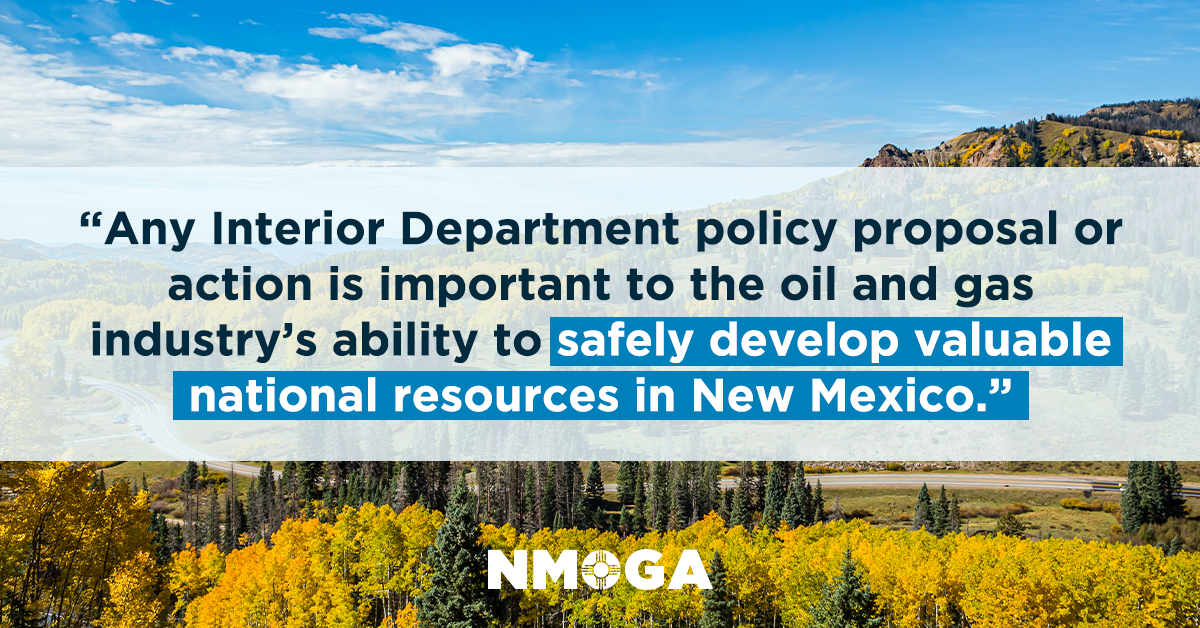 The New Mexico Oil & Gas Association (NMOGA) respectfully submits the following comments on behalf of its members in response to the Department of the Interior’s request for feedback on its review of the federal oil and gas program.

Founded in 1929, NMOGA represents more than 1,000 oil and natural gas companies and individuals operating in New Mexico, accounting for more than 90% of oil and gas activity in the state. NMOGA’s diverse membership represents every aspect of the oil and gas industry in New Mexico, including exploration and production companies, refineries, processors, pipeline transporters, on-site field service companies, suppliers, and vendors. NMOGA is dedicated to promoting the safe and responsible development of oil and gas resources in New Mexico through advocacy, collaboration, and education.

New Mexico has been a critical part of America’s new energy leadership and growth. Record production, driven by improving technologies alongside sound energy policy, has pushed New Mexico to become the third-largest producer of oil and the eighth-largest producer of natural gas in the United States. Oil and natural gas development across New Mexico is an enormous economic and employment engine, and as a result contributes significant resources to the state’s budget. Statewide production and other functions support more than 134,000 jobs and $16.6 billion in annual economic activity. Taxes and royalties from the industry account for 33% of the State of New Mexico’s annual budget, including almost $1.4 billion for public schools. The 134,000 jobs supported by industry provided $7.6 billion in labor income to New Mexicans, accounting for 14% of income earned statewide and some level of employment in each of New Mexico’s 33 counties. In the public sector, one of every seven government jobs was also supported by industry, mostly in state and local government.

The Bureau of Land Management (BLM) oversees the largest total acreage in the state and regulates over 35 million acres of federal minerals. As a result, any Interior Department policy proposal or action is important to the oil and gas industry’s ability to safely develop valuable national resources in New Mexico. In fiscal year 2020, production on federal lands accounted for 53% of total oil and 59% of total natural gas produced in the state. As a result, New Mexico is the largest onshore producer of oil and natural gas on federal lands in the United States, a point magnified by its enormous budget impacts.

In an analysis published in February 2021, the New Mexico Tax Research institute found that state and local revenue from federal lands oil and gas production totaled nearly $2.0 billion in fiscal year 2020, July 1, 2019 to June 30, 2020. This includes local revenue of $163 million and state revenue of $1.8 billion, with $1.5 billion to the General Fund and $333 million to the Severance Tax Bonding Fund and other funds. General Fund revenue includes $1.4 billion to the operating budget and $87 million to reserves. Overall, these funds comprised 18% of the total state budget, providing $734 million for public education, $344 million for health and human services, and $85 million for public safety, among others. These positive impacts and benefits are important for the department to take into consideration as part of the planning process.

New Mexico Governor Michelle Lujan Grisham recently noted in a letter to President Joe Biden that, “oil and gas production remains a significant economic force in New Mexico.” An analysis of federal revenue by the state Department of Finance and Administration found that even a modest decline in production levels between 2021-2025 could result in losses of $709 million. As Governor Lujan Grisham noted, “financial losses of that magnitude could have real impacts on our ability to achieve major goals like universal access to early childhood education.” New Mexico’s share of federal funds from oil and natural gas leasing and production are remitted directly to the state’s general fund, where resources are provided to finance the state budget. Education and healthcare spending account for most of state spending.

The vast majority of NMOGA members operate, or are affiliated with business activities, on public lands managed or leased by the BLM and Bureau of Indian Affairs (BIA). As such, our members have a vested interest in the outcome of the review of the federal oil and gas program, particularly the areas available for future leasing, stipulations or conditions of approval, impacts to valid existing rights, and other related considerations as operators and participants in the federal oil and gas program.

Oil and natural gas production on federal lands can experience extended development cycles due to the complexity and environmental reviews required under law. NMOGA members have a long history of close coordination with state field offices on endangered species, environmental issues, parks/natural resources, cultural/archeological matters, and surface/groundwater protections. NMOGA also works with various state and federal agencies, including the New Mexico Oil Conservation Division, the New Mexico Environment Department, the New Mexico Office of the State Engineer, the New Mexico State Land Office, and the U.S. Environmental Protection Agency to ensure oil and gas development is accomplished in a way that protects the environment and other resources.

In order to develop leases in an orderly and efficient manner, operators rely on certainty that properly submitted permits, needed for responsible development, will be approved in a timely manner. The continued pause on delegated authority on any leases involved in any lawsuit decreases certainty that permits on such leases will be approved or that even leases won through competitive bidding, so challenged, will even be valid. We urge the Department to defend what certainly appear to be valid lease sales from obstructionist lawsuits that seek to disrupt a normal and required process of lease offerings. Delay caused by such suits impacts the development plans of operators, especially when leases in question are part of a larger development plan involving other, non-impacted, leases.

Some reports have misrepresented the federal oil and gas leasing program, highlighting a false and disproven narrative that operators have “stockpiled” leases and permits. Not every lease contains recoverable or economically viable resources. Experts, geologists, petroleum engineers, and environmental specialists devote countless hours to review development plans, assess assets, and determine the commercial potential of projects before any oil or natural gas is produced. Once underway, producers assume the risk for capital invested in development projects on federal lands. This prudent, diligent process takes time, but ultimately ensures more effective and efficient investments in oil and gas development which then supports communities that depend on oil and natural gas.

In addition, our members and their employees live and work in the communities most affected by, and that benefit most, oil and gas development on federal lands in the Permian and San Juan basins. Our members are committed to these New Mexico communities, and take pride in being good stewards of the public resources and contributing members of our communities.

We also recognize that maintaining lands for multiple use purposes and protecting areas of critical cultural or environmental significance is important. Companies are working to reduce their environmental footprint and to mitigate impacts to New Mexico’s valuable environmental and cultural resources. As a result of developments in drilling, completion, and production technology, less land is needed to produce more oil, multiple wells can make use of the same well pad, and the time it takes to drill and complete a well is getting shorter. The industry’s continued efforts to further responsible production and development have given way to unprecedented success. NMOGA and its members are fully committed to continuing to support innovation in environmental protection and responsible development.

New Mexico-produced oil and natural gas provide the country with a clean, secure, and reliable source of energy necessary to meet demand and promote prosperity. In 2018, the United States Energy Information Agency reported that the U.S. became the largest producer of crude oil in the world, surpassing Russia, and Saudi Arabia. This achievement underscores the profound impact that new drilling and production technologies have had within global energy markets. The new technologies used for horizontal drilling, hydraulic fracturing, and production have unlocked vast amounts of oil and gas that were previously unrecoverable. These technologies have allowed for a single well to produce far greater quantities of oil and gas, decreasing the overall number of wells and surface disturbance needed to fully develop the resource.

NMOGA’s members are also the largest single force in driving innovations in reducing air emissions, managing land, and conserving water. Through advancements and new technology, the oil and gas industry in New Mexico has reduced methane emissions from 2011 levels while increasing production exponentially. Producers are testing and employing advanced technologies to lower and better manage emissions and to prevent waste of valuable products. Aerial surveillance by drones, planes, helicopters, and satellites, as well remote monitoring systems and telemetry are increasingly being adopted to help producers identify and manage unexpected emissions in a timely fashion. Continuous improvement, technological innovation, and environmental protection are the values that shape industry’s commitment to reduce and minimize emissions.

Moreover, as a consumer of water in an arid state, oil and gas producers are finding new ways to manage water resources, including testing and implementing state of the art water recycling and cleaning systems to optimize available water. Many producers now report reduced use of fresh water in their operations, with increasing usage rates of non-potable water.

We share President Biden and Secretary Haaland’s urgent priority to mitigate the risks and limit the impacts of climate change, and the United States can and should address that priority while also embracing the technologies and inventiveness oil and gas producers utilize to become cleaner, more efficient, and more environmentally sound. Ingenuity and innovation have powered the United States to record production and energy security, and these same skills are capable of ushering in a new era of low carbon, low emission oil and gas production on federal lands and elsewhere.

The oil and natural gas industry has long been a significant part of New Mexico’s economy, and will play an important and vital role in the ability of our state to recover from the devastating impacts of the coronavirus pandemic. NMOGA appreciates the opportunity to provide these comments on the important state-level contributions and impacts of the federal oil and natural gas program, and we welcome future invitations to engage further on these critical issues.