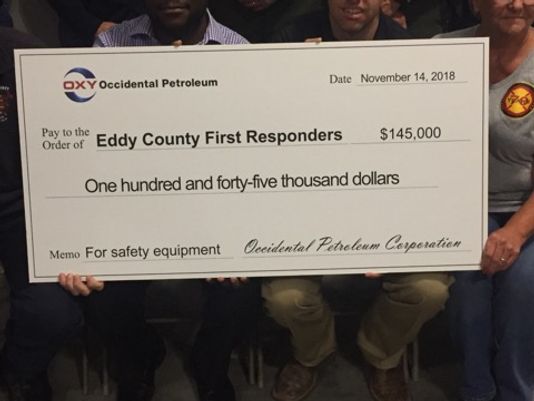 Those handling emergency duties across Eddy County are sharing a $145,000 donation from Occidental Petroleum.

The money was presented during a dinner Wednesday night at the Eddy County Fire Service.

"We are here to have a positive impact on the community," said Oscar Quintero, president and general manager of Permian Resources for Occidental Petroleum.

"You are the first ones on the scene in an emergency. These funds will go to purchase equipment."

Josh Mack, director and fire marshal for the Eddy County Fire Service praised the company for its support.

“Occidental has been a great partner with Eddy County and our volunteer fire departments," he said.

A press release from Occidental said the donation will buy emergency generators for the Carlsbad Fire Department and hydrogen sulfide monitors for the Eddy County Sheriff's Office.

Funds will also be used for an emergency operations center for the Eddy County Fire Service and volunteer fire departments.

The Happy Valley Volunteer Fire Department is using its portion for an ambulance cot system. The Joel Volunteer Fire will purchase equipment for emergency response vehicles.