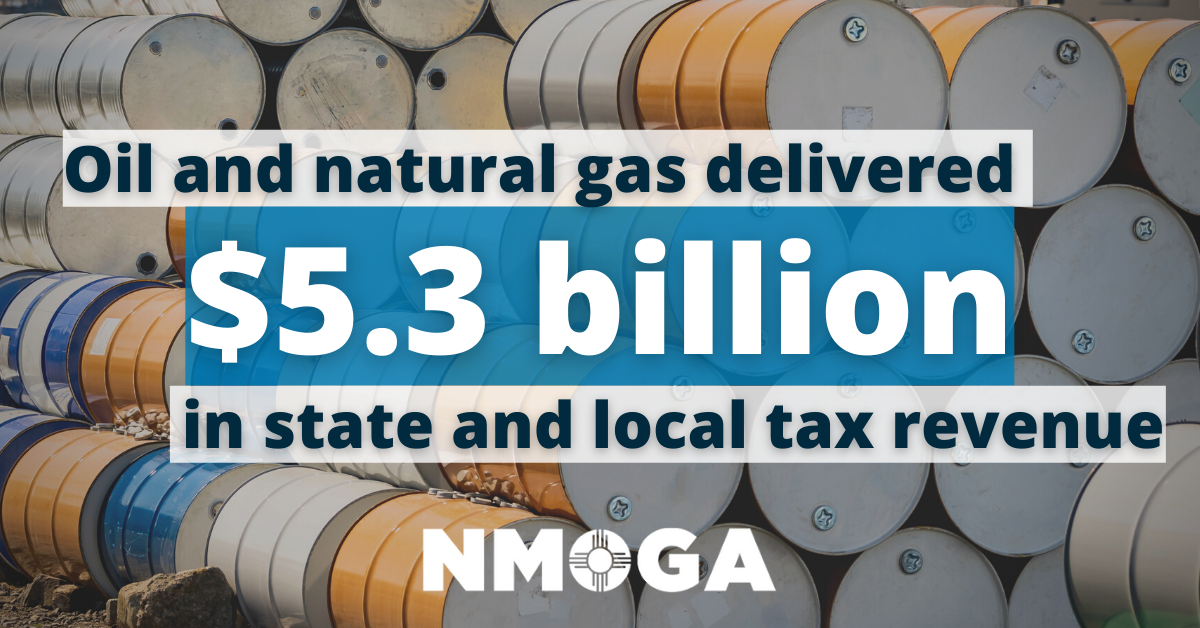 About $5.3 billion in revenue came to New Mexico from oil and gas production in the last fiscal year, per an industry report.

FY 2021’s revenue set a new record, surpassing $5.16 billion generated in FY 2019, and providing $2.96 billion to the State’s General Fund along with $358 million in local taxes and another $1.95 billion state taxes and royalties.

The industry’s revenue made up about 35 percent of the State’s general fund, the report read, with $1.04 billion going to public schools and $275 million supporting higher education in New Mexico.

The increase was credited to the continued growth of production in the state, led by the Permian Basin region in the southeast, and improving market conditions as the state and world recovered from the COVID-19 health crisis, the report read.

The growth this year led New Mexico to be ranked second in the nation in oil production, overtaking North Dakota and behind only Texas which shares the Permian Basin.

“2021 saw a remarkable recovery in New Mexico’s oil and natural gas industry as producers maintained record production levels and gradually restored drilling over the course of the year,” said Richard Anklam, president of the New Mexico Tax Research Institute, which partnered with NMOGA on the report.

“As drilling returns, production grows, and prices stabilize, policymakers and New Mexicans alike have every reason to be cautiously optimistic about the industry’s revenue contributions in future fiscal years.”

“Historic revenue equals historic opportunity, and that is great news for teachers and students, critical first responders and healthcare workers, and each and every New Mexican across this state,” Gould said. “For years, New Mexico has cemented itself at the center of the domestic oil and gas production, and the investments being made in our state are paying off in a big way.”

Gould cautioned policymakers at both the state and federal level against enacting regulations he said could threaten continued growth by increasing production costs for energy companies or restricting operations.

New Mexico’s Oil Conservation Division this year enacted new regulations aimed at limiting emissions from oil and gas operations in the state, calling for operators to capture 98 percent of produced gas by 2026 and banning routine flaring, or the burning of excess gas.

Meanwhile, the New Mexico Environment Department was underway with a rulemaking process to limit the release of methane and volatile organic compounds by oil and gas facilities, both believed to contribute to air pollution and lead to the formation of ground-level ozone.

And on the federal level, the U.S. Environmental Protection Agency was considering its own methane restrictions while the administration of President Joe Biden released a report this week calling for higher royalty and bonding rates paid on operations, while also prioritizing conservation of public lands.

The Biden administration also recently announced a 20-year ban on oil and gas drilling in the Chaco Canyon region in northwest New Mexico, while moving forward with multiple lease sales – including in New Mexico – of public land to the industry.

Stricter and “burdensome” regulations, Gould argued, could risk oil and gas’ economic contributions. He said the industry was committed to operating safely and reducing its environmental impact.

“The only obstacle to future growth, production, and revenue is policy,” he said. “Lawmakers in both Washington and Santa Fe should take note of the fact that safe, responsible oil and natural gas production in New Mexico is a win for the environment, a win for local communities, and clearly, a big win for all New Mexicans.”

Larry Behrens, New Mexico-based western states directory with fossil advocacy group Power the Future, said the industry should be supported by lawmakers as an essential part of the economy and primary source of funding.

“These results are made possible by the hard-working men and women of New Mexico’s energy industry, and they deserve nothing but our gratitude,” Behrens said of NMOG’s study. “This industry is constantly demonized by special interests and their political allies in Santa Fe, yet, they all still line up to eagerly spend the revenue it generates.

“The fact that record revenue is delivered in the midst of a pandemic and hostile leadership at the state and national level speaks to the resilience of New Mexico’s energy workers.”