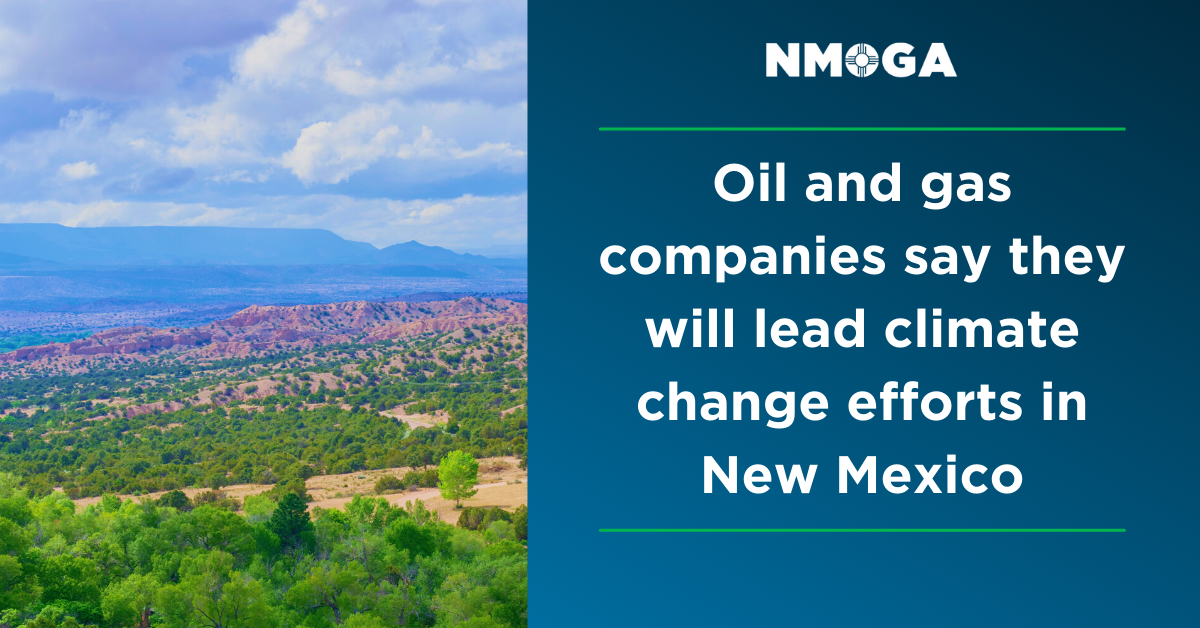 Oil and gas industry leaders said they would lead efforts to mitigate their own industry’s environmental impacts, amid calls from activist groups throughout the year for stricter regulations to curb greenhouse gas emissions.

The comments came Thursday during the 2021 Carlsbad Mayor’s Energy Summit, in a year where newly-elected President Joe Biden had placed a moratorium on new oil and gas leases on federal land and pledged to enact policy intended to restrict pollution from fossil fuels.

The annual gathering saw industry executives, local leaders and state officials gather in Carlsbad to discuss the industry and its future in New Mexico.

At the state level, this year the State of New Mexico enacted tougher emission controls via its Oil Conservation Division, requiring producers capture 98 percent of produced natural gas by 2026.

OCD Director Adrienne Sandoval said the policy’s successful enactment was the result of collaboration with the industry, environmental groups and other stakeholders in the state.

“What the rule does is provide a lot of structure on both sides. We don’t dictate how you get there,” Sandoval said of the gas capture requirement. “It could be something different for each and every company. We have tried to continue as much stakeholder participation as possible."

The OCD also altered its rules to outlaw spills, meaning a liquid or gas spill by an operator would be a violation immediately before cleanup efforts.

"It required companies to really take proactive steps," Sandoval said. "Prevent the spill on the front-end so you don't have to pay for it on the back-end."

NMED Deputy Secretary Rebecca Roose said at the summit the rulemakings were part of an initiative started by Gov. Michelle Lujan Grisham upon taking office in 2019 via executive order calling on state agencies to devise strategies to curb air pollution.

Lujan Grisham also recently laid out a desire for New Mexico to increase its hydrogen generation, using extracted hydrogen gas to generate electricity as a lower-emissions source which Roose said would make the state a national leader in low carbon power.

“We have the workforce, the geology and the incentives to make New Mexico a hub for the development hydrogen energy, Roose said.

Josh Viets, vice president of the Delaware Basin for ConocoPhillips said the industry faces some uncertainty amid regulatory shifts such as those in New Mexico aimed at mitigating pollution.

He said the company aimed for “net-zero” emissions by 2050, touting the goal and efforts to meet it as a market-driven agenda in response to investment and social desires ahead of the added regulatory burden.

ConocoPhillips recently initiated the use of drones, sensors and other technology to monitor for methane emissions and leaks, Viets said, key aspects in the company’s efforts to meet regulatory and investor demands around environmental impact.

“We’re facing regulatory pressure, especially here in New Mexico,” he said. “Not a day goes by where we don’t talk about emissions.”

She said this is the industry’s biggest challenge moving forward.

"We have to get those investors back, but it’s hard when you have so much of the world talking about getting rid of fossil fuels. That’s a big one is climate change. We at Oxy are doing everything we can to change the narrative, to reduce emissions,” Hollub said.

“We’re trying to transition from just an oil and gas company to a carbon management company. We have to be in the business of providing oil and gas but doing it in a carbon-free way.”

She said the company aimed to reduce emissions by drilling for oil and gas using sequestered carbon dioxide (CO2) from the atmosphere and capturing the gas from industrial sites for use in hydrocarbon extraction.

“There is a way to get to net-zero carbon fuel,” Hollub said. “We can be part of the solution. If we don’t, we’ll continue to face challenges with investors.”

Clay Gaspar, chief operating officer with Devon Energy said the energy transition promoted by many critics of the oil and gas industry and New Mexico policymakers must still include fossil fuels to sustain energy demands in the U.S. and around the world.

“The idea of shutting in all the wells and we’ll be fine with just renewables is a real stretch,” he said. “It’s detrimental to the livelihoods we all lead.”