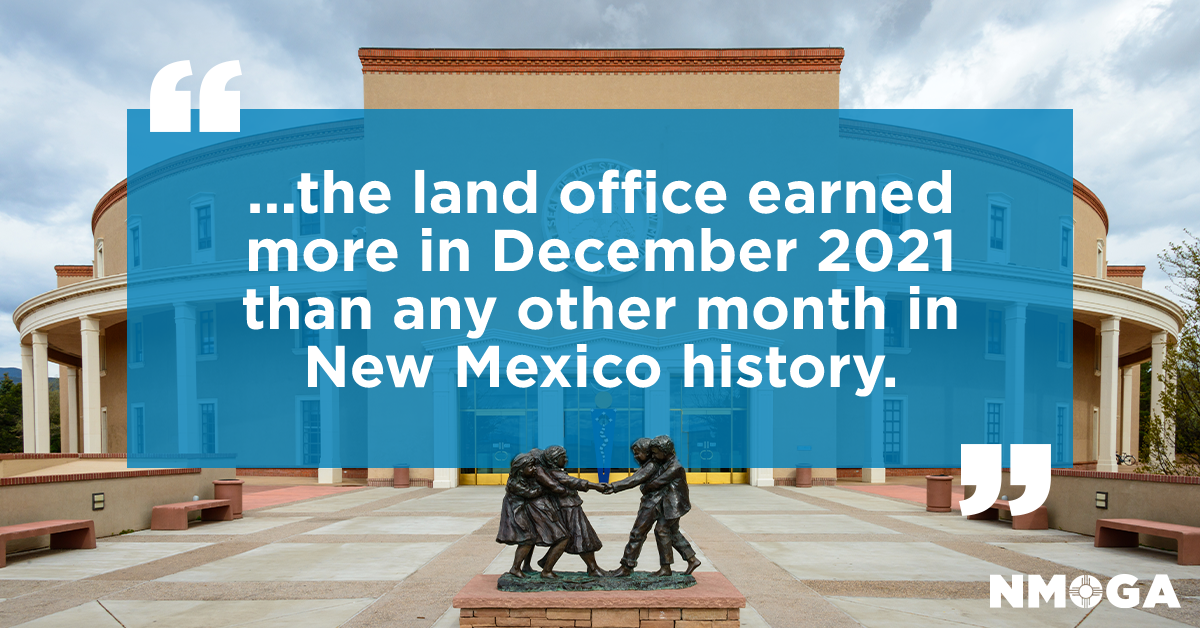 Oil and gas continued to lead in revenue to the State of New Mexico as lawmakers prepared for the upcoming budget-focused 2022 Legislative Session commencing later this month.

Last week, the New Mexico State Land Office announced in received a record in monthly revenue, about $141.8 million in December 2021 with oil and gas accounting for most of the income.

Records show of the total received last month at the Land Office, which manages New Mexico’s State Trust land and rents the lands to oil and gas operators, about $137.9 million came from oil and gas royalties or 97 percent.

December’s revenue overcame the previous all-time high of $141.2 million garnered by the Land Office in June 2021, topping other highs of $135.1 million in September and $132.6 million in October of last year.

Commissioner of Public Lands Stephanie touted the revenue as “on track” to exceed $1 billion in FY 2022 for the fourth year in a row.

She said revenue at the Land Office was being diversified to include uses aside from fossil fuels like renewable energy, technology and outdoor recreation.

“I’m proud to announce that despite the ongoing pandemic, the land office earned more in December 2021 than in any month in New Mexico history,” Garcia Richard said. “This speaks to the growth and success across all revenue streams, including renewable energy, oil and gas, grazing, business leases, rights of way, and more.”

Funds raised by the Land Office go to public schools, hospitals and universities through the State’s Land Grant Permanent Fund.

Garcia Richard said the money is also invested by the State Investment Council, used to offset costs for New Mexicans by more than $1,500 per year.

“By continuing to earn record-breaking revenue that is invested by the State Investment Council, our agency now has the potential to save New Mexico families even more than the $1,500 we save taxpayers every year,” she said.

“We are excited to continue this growth and our work to diversify our revenue streams by expanding innovative economic development projects and outdoor recreation opportunities on state trust land.”

Texas, with which New Mexico shares the Permian Basin – the U.S.’ most active oil and gas field – saw $15.8 billion paid by the industry through state and local taxes in Fiscal Year 2021, per a recent report from the Texas Oil and Gas Association.

That revenue meant a 20 percent increase in both state royalties and production taxes, the report read , while production taxes exceeded $5 billion for “only the third time in history.”

Texas school districts received $1.84 billion in property taxes from mineral-producing lands in the state, while counties garnered $640 million in similar taxes, per the report.

The Midland school district was the top earner in Texas, with $134.9 million received in property taxes, while Reeves County along the Texas-New Mexico border was the top-earning county at $47.4 million.

President on the Association Todd Staples said the oil and gas industry proved resilient despite the COVID-19 pandemic that began in the U.S. in March 2020 and led to multiple travel and business restrictions which subsequently sent fuel demand plummeting to historic lows.

“As our nation continues its rebound from the lingering impact of the pandemic, this data confirms reliable, affordable energy, fuels and products made by the oil and natural gas industry are central to continued economic and environmental progress,” Staples said.

He was critical of federal policies intended to address pollution and climate change under the administration of President Joe Biden last year could risk continued growth in oil and gas production.

Last year as Biden took office, a pause was placed on new oil and gas leases by the Department of Interior.

Although a federal judge later filed and injunction against the halt, Staples warned that any future efforts to slow U.S. oil and gas operations could risk climate progress by making American more dependent on foreign and more pollutive energy supplies.

“Squandering our nation’s energy might through misguided policy is a disservice to every American and a step in the wrong direction on the environment,” he said.

“If the world is truly serious about climate progress, we need to be producing and exporting more natural gas – not less – to provide other nations with lower emissions-intensive energy resources.”