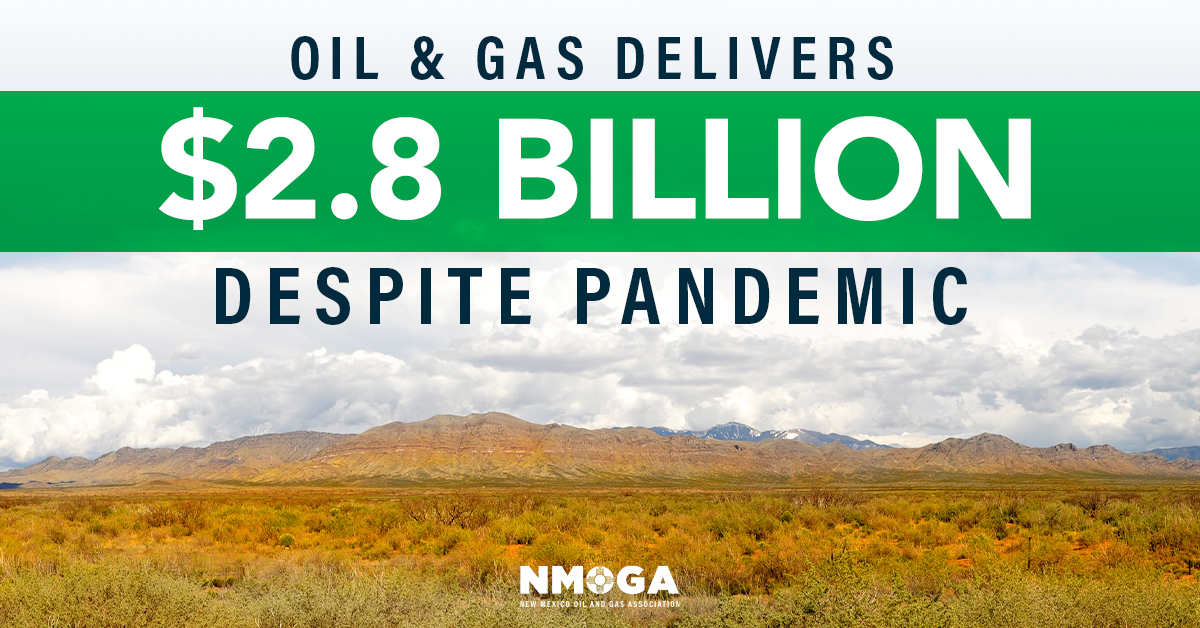 ALBUQUERQUE, N.M. (AP) — Oil and gas development infused $2.8 billion into New Mexico coffers during the 2020 fiscal year and marked its second-highest total revenue ever reported despite a global price war and plummeting demand amid the coronavirus pandemic, according to a report released Monday.

The New Mexico Oil and Gas Association commissioned the nonprofit New Mexico Tax Policy Institute to analyze the economic impact of drilling on the state budget and the financing of education, public safety and other government programs.

Industry revenues, which accounted for about one-third of total state spending, were fueled by sustained production in the Permian Basin. Straddling southeastern New Mexico and West Texas, the area is one of the most prolific plays in the world as major energy companies have spent the last several years consolidating their focus on the region.

Too many investments have been made in recent years and too much potential remains in the basin for any companies to consider pulling out, said Ryan Flynn, the industry group's executive director. That means production has remained steady despite the pandemic's challenges and the state's budget has continued to see benefits.

Mineral leasing on federal land was the single largest source of oil and gas revenue for the state at more than $800 million, according to the report.

However, the pace of development on federal lands is expected to change under a Biden administration, which already has vowed to target fossil fuels as part of its climate campaign. That includes blocking any rollbacks of environmental laws and banning new permits for drilling on federally managed public lands.

President-elect Joe Biden recently nominated U.S. Rep. Deb Haaland to lead the Interior Department, which oversees oil and gas development on federal land. A co-sponsor of the progressive movement's Green New Deal, the New Mexico Democrat has said that she supports a ban on fracking and has suggested that leasing policies need to change to encourage more renewable energy development.

While drawing the praise of environmentalists, Haaland's stance on energy development has concerned many in New Mexico given the poverty-stricken state's dependence on oil and gas revenues.

“It’s hard to see a bright spot for our state because of her extreme position on energy. Biden’s pick confirms that he plans to systematically take apart our important oil and gas industry,” state Republican Party Chairman Steve Pearce said in a statement issued over the weekend.

Flynn said the positions Haaland has taken as a politician are certainly concerning but the lens with which she needs to look at energy issues will be different if confirmed as head of the Interior Department.

“You may have been opposed to the industry in theory as a member of Congress, but then when you're responsible for managing an agency that will have a direct impact on thousands and thousands of families and their livelihoods as well as on the state, my hope is that there will be a different perspective as we engage and work together moving forward,” he said. “A ban or moratorium on development would crush the state of New Mexico.”

Aside from a $1 billion revenue hit to the state, the industry group estimates the loss of more than 60,000 jobs in the first two years if there were a ban on leasing or extraction on federal land.

Some New Mexico politicians also have been mounting pressure on the industry as part of Democrat Gov. Michelle Lujan Grisham's push to limit methane emissions and other pollution.

The state Environment Department announced Monday that it partnered with the U.S. Environmental Protection Agency to conducted helicopter flyovers of New Mexico's two major basins using infrared technology to spot emissions at oil and gas operations. The agency said emissions are significantly higher than those reported by the industry and are in line with those identified by environmentalists and other groups.

According to the agency, of the 9,100 storage tanks observed in the Permian Basin, about 505 — or 5% — tanks were leaking methane or volatile organic compounds. Of the 1,400 flares observed, just over 4% were unlit and emitting pollutants. The percentages were similar for the San Juan Basin in northwestern New Mexico.