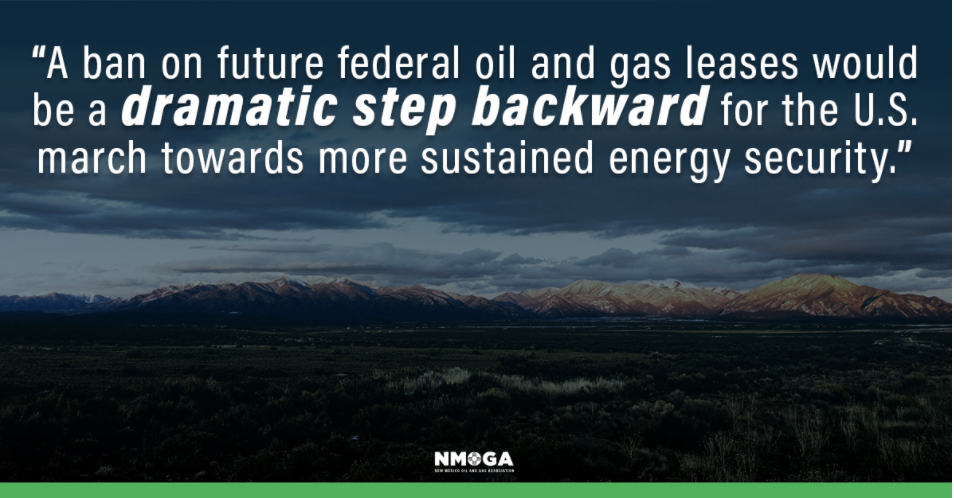 With election season in full swing, some politicians, notably presidential hopeful Joe Biden, think calling for a ban on future oil and gas leasing on federal lands will score points with some voters.

But that’s a losing approach for America's long-term energy security that puts customers and our economy in peril.

In the early 1970s, Americans suffered from an oil embargo imposed on the U.S. by the Oil Producing Exporting Countries, commonly known as OPEC, because of the U.S.'s unwavering support of Israel during the Yom Kippur War. Americans of every rank and file were forced to wait in lines on designated days for hours on end just to fill their cars with gas. Five years later, Americans faced the same lines at the gas pump resulting from the dramatic decrease in oil production due to the Iranian Revolution.

Because of these costly oil shortages, policymakers implemented measures to put the U.S. on the road to energy independence. Those measures included a 1975 ban on the export of crude oil, a diversification of the U.S energy portfolio (with even a Democratic president calling for coal use), and the implementation of a federal maximum speed limit of 55.

Perhaps less known are the advancements in oil and natural gas exploration that were pushed to the forefront due to the Disco-Era oil scarcity. According to the U.S. Energy Information Administration, advances in such techniques as bidirectional drilling and hydraulic fracturing led to a doubling of U.S. oil production between 2011-2020.

Despite these remarkable steps toward energy security, some are seeking to undermine this progress by banning the extraction of oil and natural gas on federal lands. What would this mean for the supply of affordable and reliable energy to American customers?

One needs only to look to the fifth largest oil and natural gas-producing state — New Mexico — to answer that question. Unlike Texas, its massive oil-producing neighbor to the east, New Mexico extracts nearly half of its oil and 67% of its natural gas from leases on federal lands. Before the pandemic, tax revenue generated from oil and production overall comprised 20% of the state’s budget.

That money is crucial to New Mexico’s future, which is why Joe Biden’s call for a ban on energy leases on federal land is so troubling. It’s just one reason the Albuquerque Journal recently posed the question to Democratic Gov. Michelle Lujan Grisham, a Joe Biden ally, "So is the Governor in favor of this (Federal leasing ban)? If it does happen, does she have a plan?"

The stakes are extremely high for New Mexico, which has one of the highest poverty rates in the country. Biden’s potential ban could make that even worse. According to a recent American Petroleum Institute study, if the federal leasing ban were implemented, 62,000 jobs in New Mexico would be lost, accounting for over 5% of all jobs in the state. When coupled with the $1.1 billion loss in oil and gas revenue used to fund New Mexico's education and environmental stewardship programs, the threat of a federal leasing ban is economically cataclysmic.

The evidence is clear. A ban on future federal oil and gas leases would be a dramatic step backward for the U.S. march towards more sustained energy security. It would also be deeply damaging to New Mexico. It’s time for Joe Biden and others to abandon this bad idea and focus instead on using America’s abundant energy to recover from this pandemic.