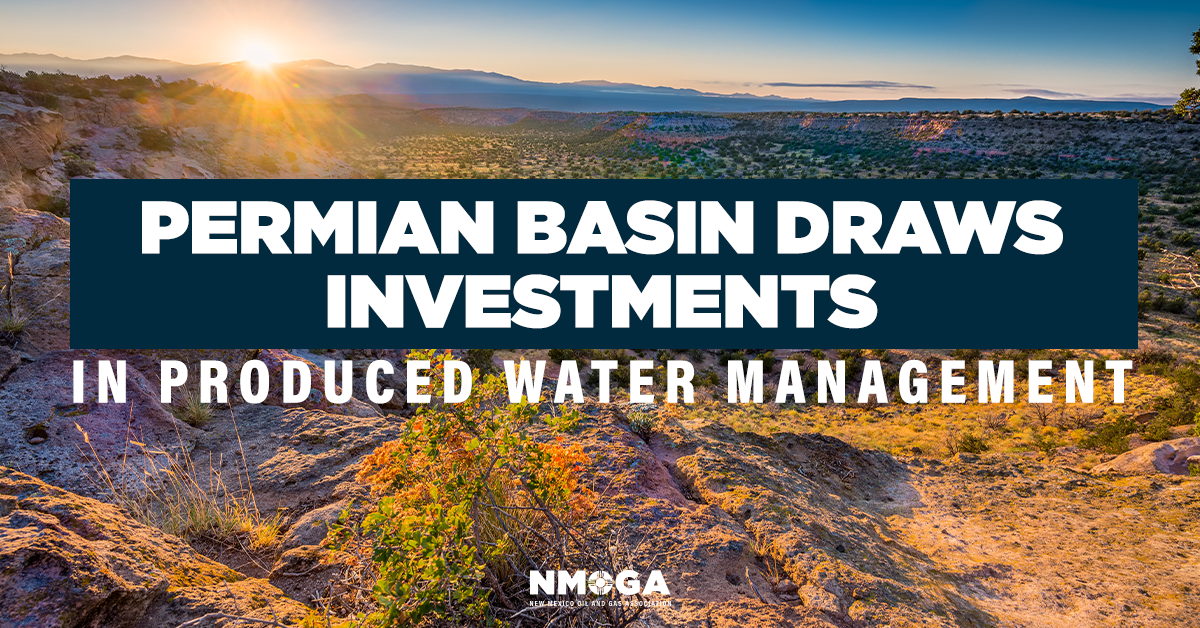 As the oil and gas industry struggles to recover from the COVID-19 pandemic, interest in managing wastewater and other liquid byproducts in the Permian Basin continued to lead to investments in the water midstream sector.

The need to manage oil and gas wastewater, often known as produced water by the industry, grew as extraction boomed in the desert regions of southeast New Mexico and West Texas where water is scarce.

Companies continued to invest in water management facilities despite what many viewed as a temporary downturn in the value of crude oil and natural gas.

Breakwater Energy Partners announced on Monday the construction of a produced water recycling facility between Howard and Martin counties in Texas near its border to New Mexico.

Produced water is a combination of flow back from hydraulic fracturing and formation water brought up with oil and gas from underground shale.

It’s high in salt and other chemicals and typically disposed of through injection wells that send the water back underground.

In recent years, many companies began recycling and reusing the water for subsequent fracking operations, either at their own facilities or through a midstream operator.

At Breakwater’s 80-acre facility, known as the Big Spring Recycling System, water is brought in from drilling facilities owned by numerous commercial operators for recycling and return to the oilfield.

Jason Jennaro, chief executive officer at Breakwater said the company aims to respond to the industry’s growing desire to recycle its waste.

"Operators tell us all the time that they want to recycle 100 percent of their wastewater. But they either lack the ability to aggregate enough recycled water when they need it, or they are unable to distribute their water to others when they have too much," he said.

"We call our approach to collaborative recycling. We're saving our customers money by integrating their entire water supply chains into a single multi-customer connection point which includes the last mile recycled water distribution to the wellsite.

“Operators don't want to pay twice for the same water: once for completions and a second time for disposal."

“Breakwater has adopted a 'recycle first' water midstream model at a time when most of the industry's water is still discarded into saltwater disposals," Jennaro said.

"Breakwater has invested heavily in its last-mile delivery capability, which affords us the flexibility to transfer high quantities of recycled water directly to customer's wellsite.”

The purchase included 65 miles of pipeline and 100,000 bpd of disposal capacity.

Cimarex also agreed to dedicate 15 acres in the area for gathering, disposal, and recycling of produced water.

“We are excited to establish long-term alignment with Cimarex, a company which continues to demonstrate and build on its strong reputation as a thought leader in our industry,” said Justin Love, chief executive officer of Blackbuck.

Produced water management in New Mexico could be lacking oversight, exposing people and the environment to poisonous chemicals and pollutants, per a recent study from Washington, D.C.-based environmental group Earthworks.

About 1.4 million gallons of produced water was spilled in 2020 as of August, per the study which cited data from the New Mexico Energy, Minerals and Natural Resources Department (EMNRD), and its subsidiary Oil Conservation Divisions (OCD).

The spillage in the first eight months of 2020 came from 327 incidents and would cover about 4.4 acres in wastewater, read the study.

In 2019, records show 4 million gallons were spilled in 800 incidents.

Melissa Troutman, Earthworks research and policy analyst said New Mexico must adopt stricter rules regarding the management of oil and gas wastewater, and that spills should be considered a violation of state law along with failure to report such incidents.

The organization filed a petition with the State of New Mexico that the OCD adopt a rulemaking to crack down on produced water spills.

Troutman pointed to major oil companies such as XTO Energy, Devon Energy and Occidental Petroleum as major contributors to the problem.

“There is a significant risk to public health in New Mexico from the oil and gas industry under the status quo,” she said. “Many oil and gas waste problems are preventable with common-sense policy changes.”

Earthworks advocated for a halt in oil and gas leasing until regulations could be strengthened regarding wastewater management.

“Further oil and gas extraction under the status quo guarantees more pollution and risk to the environment and public health. This is why the best policy option is to halt any further oil and gas permitting in New Mexico,” read a statement from Earthworks.

“However, with the likelihood of more extraction in addition to the legacy of waste coming from existing wells, swift protective measures are required to be enacted through legislation and/or regulatory rulemaking.”