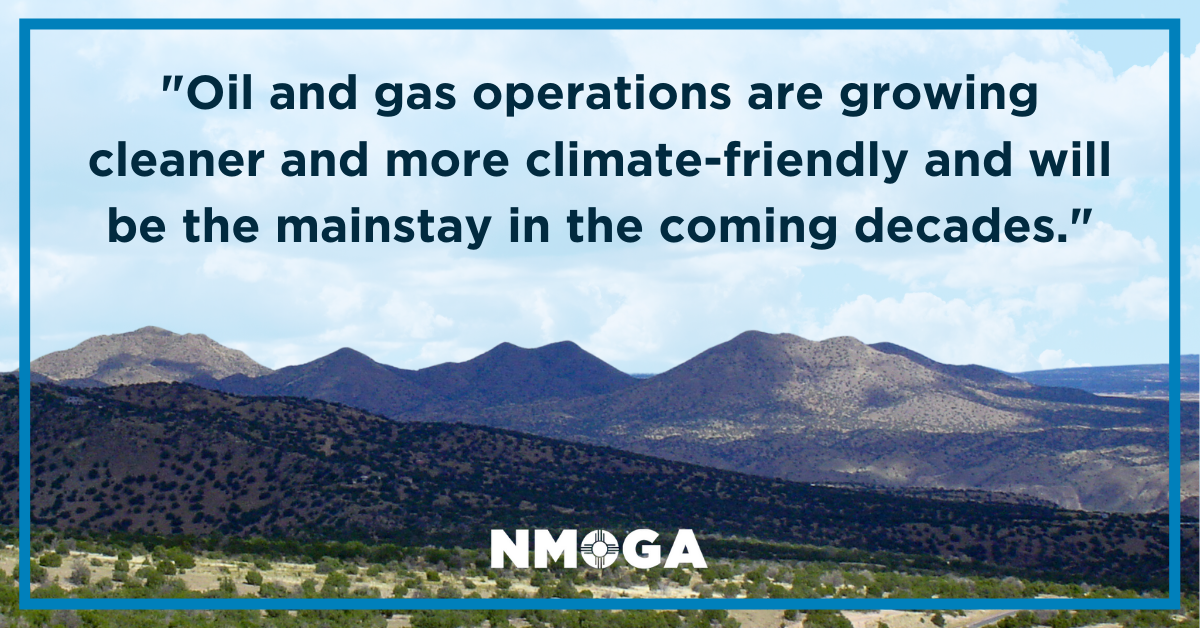 These two things are indisputable: Greenhouse gases are warming the planet, and the fossil fuel industry is a large source of these emissions.

These two things are indisputable: Greenhouse gases are warming the planet, and the fossil fuel industry is a large source of these emissions.

An industry representative, speaking Friday at a Santa Fe energy summit, didn’t deny either, but he said oil and gas operations are growing cleaner and more climate-friendly and will be the mainstay in the coming decades while renewables remain in a supporting role.

Fossil fuel not only powers transportation, generates electricity and heats homes, but is integral to most household products, making it an irreplaceable part of modern life, said Todd Staples, CEO of the Texas Oil & Gas Association, during the summit at La Fonda on the Plaza hosted by the U.S. Hispano Chamber of Commerce.

The best path to greener fossil fuel energy is to produce more domestically, Staples said, because the U.S. has more stringent oversight than most of the world, as seen by America’s reduction in collective carbon emissions in recent years.

“If you want to achieve climate progress and energy security, we want more oil and gas produced in America, not less,” Staples said.

Oil drilled in the Permian Basin and Gulf Coast has some of the lowest carbon emissions in the world, he added.

U.S. Environmental Protection Agency data, he contends, shows the nation lowered carbon dioxide emissions by more than 8 percent from 2010 and 2019, while China’s and Russia’s rose 25 percent and 21 percent, respectively.

The agency’s data also indicates methane emissions in the Permian Basin fell by 70 percent since 2011, while oil and gas production rose by 320 percent in that same period, Staples said.

However, some research tells a different story about methane, a potent greenhouse gas.

During a helicopter flight in December 2020, state and federal regulators, using an optical scanner, detected more than twice as much methane leaking from equipment on the Permian Basin than the year before.

And it was substantially more than operators report, according to the state Environment Department.

Climate researchers estimate methane is 80 times more powerful in warming the Earth over a 20-year period than carbon dioxide.

The state recently approved a rule to curb nitrogen oxide and volatile organic compounds, which form ground-level ozone, after high levels were found in counties in and around the Permian and San Juan basins, which have the bulk of the state’s oil and gas activity.

One environmental advocate said she was skeptical about any claims regional carbon emissions are dropping.

“The Permian Basin is, like, the leakiest basin in the country,” said Camilla Feibelman, executive director of the Sierra Club’s Rio Grande Chapter. “The recent research out is showing just incredibly high emissions rates in the Permian.”

Texas’ side of the Permian is worse because that state has little to no regulation of methane, putting nearby New Mexico communities at risk, Feibelman said. For that reason, the EPA must impose tougher federal rules to curb methane and prevent the pollution from drifting into New Mexico from neighboring states like Texas, she said.

“[The] industry nearly never does anywhere close to what they need to do without being properly regulated and without agencies that have the budgets to enforce the rules,” Feibelman said.

These state-of-the-art operations are making great progress in protecting the environment, he said.

Texas also is working in tandem with New Mexico to cut unnecessary venting and flaring of natural gas, he said.

But one economist said the industry touts how effective new technology and voluntary measures are whenever it wants to reduce oversight.

Even with improved technology, fossil fuel emissions remain an environmental problem because they still emit some greenhouse gases, Peach said.

As for the transition to renewables, Staples said, oil and gas companies are some of the largest investors in wind and solar, believing a diverse energy mix is healthy.

“We know the energy demand is going to be bigger, and that it’s the responsibility of all of industry to come together and produce this energy our world needs in a cleaner, stronger and better way,” Staples said.

However, oil and gas will remain the energy backbone in the future, Staples said.

Federal data indicates oil and gas will remain about 68 percent of the world’s energy in 2050, even as renewables grow to supply 28 percent from their current 11 percent, he said.

The transition to greener energy is well underway, she said, and is materializing in different ways, from more people buying electric vehicles to New Mexico utilities investing in green infrastructure, to Arizona rejecting a gas-driven power plant.

Fossil fuel operations are so infused with greenhouse gases that it will be impossible to slash them completely, Feibelman said. Even New Mexico’s strong new rules will only reduce methane emissions by 60 percent in the next several years, which still isn’t enough to quell climate change, she said.

“What the climate crisis demands is we move quickly away from the fossil fuel industry,” Feibelman said.

Peach said the war in Ukraine disrupting energy supplies worldwide has shown how tricky the transition away from fossil fuel will be.

The administration of President Joe Biden has resumed oil and gas leasing on federal lands and is encouraging companies to increase fossil fuel production, with the hope that boosting supply will ease rising gasoline prices.

Whatever Biden’s reasons, he’s taking a step back from his climate goals, Peach said. The hard reality is that fossil fuel is needed in the short term, regardless of the environmental impacts, he said.

It will be possible for New Mexico and the rest of the world to ween themselves off oil and gas, but it will take some time and industry will resist, Peach said.

“It’s going to be an ongoing and continuing battle,” Peach said.