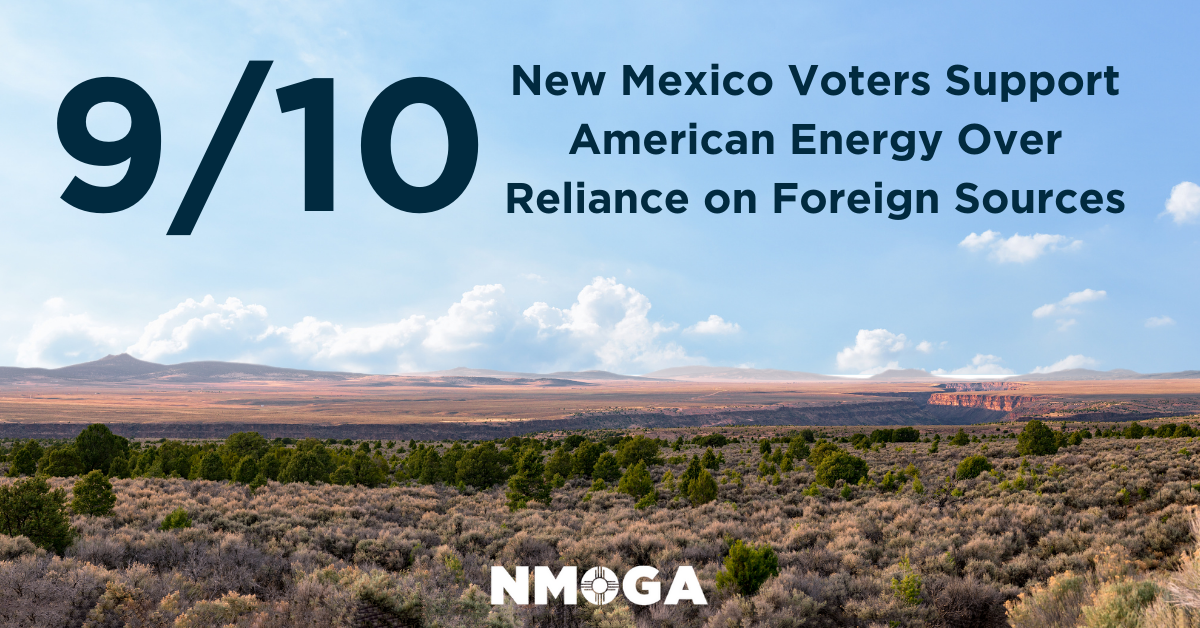 Oil and gas trade groups in New Mexico and nationwide urged the administration of President Joe Biden to support domestic fossil fuel production in the face of mounting pressure brought on by Russia’s recent invasion of Ukraine and skyrocketing demand as COVID-19 subsides.

The American Petroleum Institute (API) in conjunction with the New Mexico Oil and Gas Association (NMOGA) published the results of a poll the groups commissioned from Morning Consult showing “a majority” of New Mexican voters support increased domestic production.

The poll was conducted from March 1-8 among a sample of 220 registered voters in the state.

The poll showed in that pool of voters, nine out of 10 were concerned about Russia’s invasion of Ukraine, while eight out of 10 believed resulting energy shortages in Russia demonstrated the risk of relying on foreign energy sources.

Other determinations of the poll showed 86 percent of the 220 people polled believed producing oil and natural gas domestically would support national security, while another 80 percent believed such actions would allow the U.S. to maintain “a leadership” role during times of global uncertainty.

Another 83 percent of those surveyed said domestic production could help lower energy costs for American consumers.

This came during a time of record-high gas prices in the U.S. and New Mexico, which averaged $4.24 a gallon and $4.14 a gallon, respectively per AAA.

NMOGA President Doug Ackerman said the data should push policymakers to support the industry amid global conflict and as a means to provide jobs and economic growth in New Mexico.

“Policymakers in Washington and Santa Fe would be wise to recognize the overwhelming support for domestic energy production and the affordability and reliability provided to all consumers, families, and households throughout the United States.”

API President Mike Sommers said voters in New Mexico and across the U.S. were supportive of industry-led efforts to bring down energy prices and move the nation away from reliance on foreign sources.

“Given the ongoing crisis in Ukraine and the rising cost of energy both at home and abroad, there is no question that access to secure, reliable and affordable energy is top of mind for voters in New Mexico and across the country,” he said.

“Now is the time for this administration to advance policies that incentivize U.S. production and send a clear message that America is open for energy investment.”

Is Biden 'hostile' to oil and gas industry?

The API and NMOGA poll came as a team of fossil fuel industry groups, including NMOGA and the Permian Basin Petroleum Association, which represents producers in southeast New Mexico and West Texas, penned a letter to the Biden administration urging the federal government to reduce restrictions on oil and gas and resume federal leasing.

But last, after debate in federal court around an injunction filed against the halt by a federal judge, the Biden administration announced it would resume leasing of federal land.

A federal court filed a ruling on an appeal to allow the Interior Department to use its “social cost of carbon” metric in evaluating oil and gas operations, after a previous court struck down the metric’s use.

The industry groups in their letter refuted statements by the Biden administration that there were “over 9,000” unused permits that would sustain the industry during the leasing pause.

Many are tied up in legal litigation, undergoing extensive environmental review that can take years, or will simply not be developed after exploratory work determines they will not produce adequate amounts of oil and gas, the letter read.

Permits are not the only approval needed before drilling, read the letter. There also rights of way needed to add pipelines onto the leased land.

But the Biden administration was so “hostile” to the industry, the letter read, either slowing or blocking completely such approvals for companies to produce oil and gas.

“There should be no confusion: since the time you first began campaigning for, and since becoming, President, you have expressed deep hostility toward the oil and natural gas business – and by extension, the thousands of very hard-working men and women – union and non – in very good paying jobs, who bring energy to the nation,” read the letter.

“We stand ready to work with you and your administration as well as reasonable voices in Congress to ensure we are united against the threat to democracy that is Valdimir Putin.”

In a statement following reports that oil and gas leasing would resume, Jesse Prentice-Dunn, policy director for the Center for Western Priorities said the federal government must enact reforms to better protect the environment from the impacts of extraction before restarting leasing.

“Before offering new leases, the Interior Department must reform the public lands oil and gas leasing system,” Prentice-Dunn said. “That means making sure taxpayers get a fair share for publicly-owned resources, cracking down on rampant speculation, and taking into account the costs to our climate and communities.”