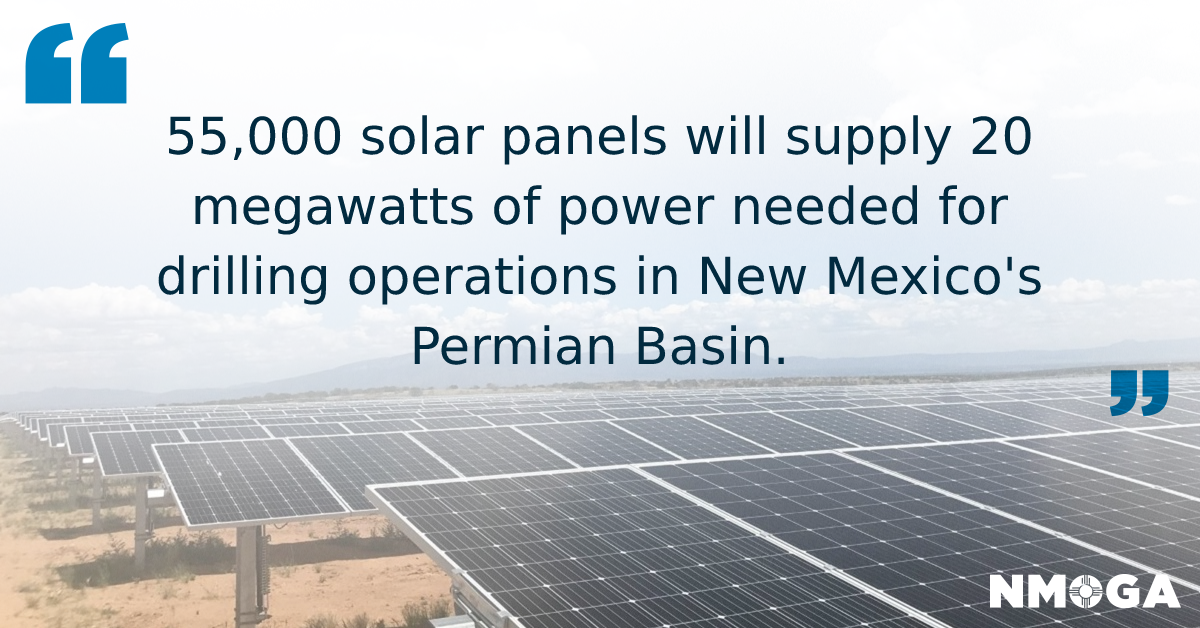 An Eddy County solar farm will support the needs of Chevron’s Permian Basin oil and gas operations after the fossil fuel giant won a bid for a section of State Trust land for the project.

The New Mexico State Land Office announced the lease of 326 acres in Eddy County, about 25 miles south of Carlsbad near Whites City, for a $140,000 bid that will see Chevron work with Algonquin Power and Utilities to develop the Hayhurst New Mexico Solar Project.

Hayhurst will include about 55,000 solar panels and generate 20 megawatts (MW) of solar power to support Chevron’s electrical loads in southeast New Mexico – a region known for supplying most of the state’s oil and gas production.

The second phase of the project would generate 11 MW of solar power after Chevron obtains approval from a local utility, per a State Land Office news release.

The Land Office estimated the project would generate up to $7 million in revenue for the State of New Mexico.

She said Chevron’s use of renewable energy would mark the beginning in a trend of extraction operations transitioning to lower-carbon power supplies.

“We’ve spent the last three years working tirelessly to restore our public lands and ensure better stewardship by our lessees,” Garcia Richard said. “By partnering with Chevron, we are paving the way for other oil and gas companies to successfully transition away from the use of natural gas or electricity to power their equipment.

Renewable energy was becoming more affordable for energy companies, she said, leading to growing interest in projects like Hayhurst.

“The increased interest in use of renewable energy in extractive industries further proves the reliability and cost-effectiveness of solar energy and why increasing our renewable energy output in New Mexico is critical to the long-term health of our land and state,” Garcia Richard said.

Eddy County commissioners recently voted to issue an industrial revenue bond for the project and related transmission at their Dec. 21 meeting.

The bonds, valued at $40 million, would help finance the project and provide exemptions from property taxes for a maximum term of 30 years, and would not impact the county’s finances, per Chevron officials.

County Manager Allen Davis said the project would bring jobs and economic development to the region as the solar facility is built and could Chevron’s help maintain the company’s ongoing operations.

He said the power generated would be used for Chevron’s operations but could also be available to the local grid.

“This would bring in construction work for several months next year,” Davis said. “It would reduce their (Chevron’s) operating costs and extend the life of their assets there. There’s a lot of production in that immediate area.”

New Mexico’s efforts to up renewable energy in its most active fossil fuel region followed recent federal actions to fast-track such projects around the country – part of President Joe Biden’s signature agenda to address climate change and pollution concerns.

On Wednesday, the Biden administration announced a memorandum of understanding (MOU) between the U.S. Departments of Interior, Agriculture, Energy and Defense along with the U.S. Environmental Protection Agency prioritize “clean energy” projects for federal review.

Coordination teams between the agencies will be established under the MOU to accelerate decision making and environmental reviews of the projects on federal public land.

Interior Deputy Secretary Tommy Beaudreau said the move would help the federal government meet the administration’s goal of a carbon-free power sector by 2035, and to permit 25 gigawatts of solar, wind and geothermal power by 2025.

A gigawatt is equal to 1,000 megawatts and is enough electricity to power about 750,000 homes.

“This MOU will help inform the Bureau of Land Management’s specialized permitting process expertise and we look forward to working with our sister agencies to support a clean energy future.”