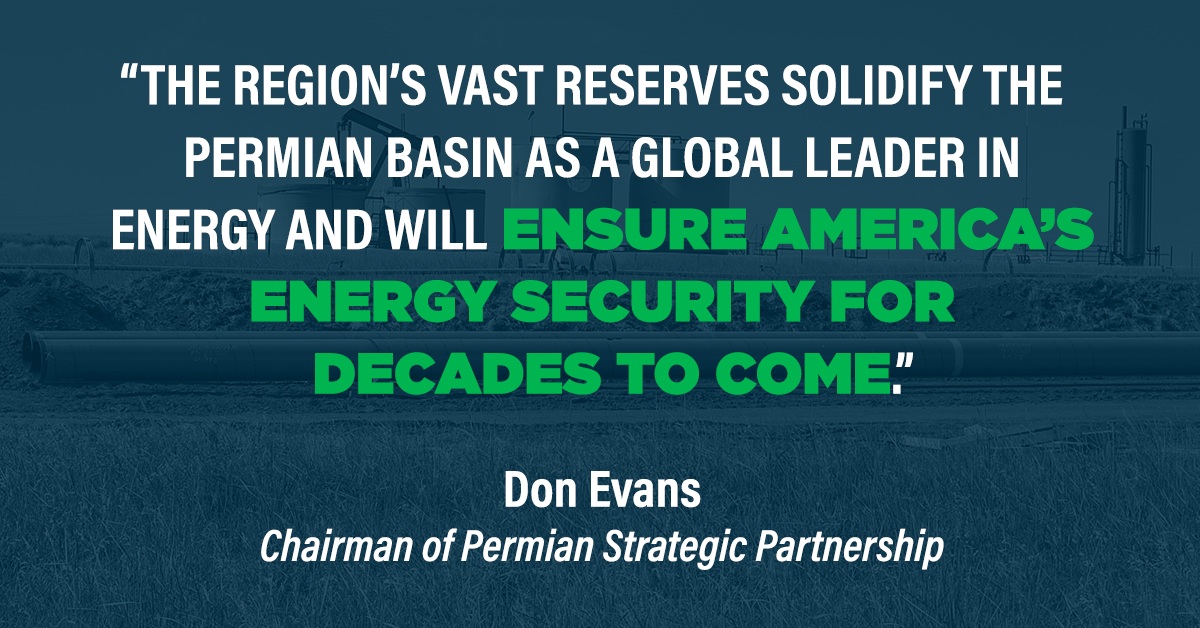 The Permian Basin in southeast New Mexico could be one of the most prolific oilfields in the world and see some of the direst environmental threats throughout the Land of Enchantment.

A recent study from the Permian Strategic Partnership (PSP) – a group comprising of oil and gas industry leaders and local stakeholders in the region – reported the basin contains more than 92 billion barrels of proven oil reserves and enough natural gas to meet U.S. household energy needs for the next 60 years.

Operations in the region could contribute more than 18 percent of New Mexico’s gross domestic product (GDP), the study read, and 11 percent of Texas’ GDP.

Chairman of the PSP Don Evans, who also served as U.S. commerce secretary under former-President George W. Bush, said the Permian’s viability was always known and increased investments in infrastructure were needed to fully capitalize.

“The region’s vast reserves solidify the Permian Basin as a global leader in energy and will ensure America’s energy security for decades to come,” Evans said. “Proper infrastructure investments are critical to the future productivity of the Permian and the extraordinary economic benefits it provides.”

The study released on Sept. 11 used new data from the Texas A&M University System finding that despite market volatility brought on by the COVID-19 public health crisis – which led to a historic decline in oil prices and industry operations – the Permian could still provide benefits to New Mexico and Texas.

PSP Chief Executive Officer Tracee Bentley said that as the pandemic subsides, the region’s oil and gas industry will continue to sit as a major economic driver, pointing to $4 billion in tax revenues and royalties contributed by the industry toward state education funds in 2019.

“The Permian Basin has positively impacted every community in Texas and New Mexico,” she said. “The region’s energy industry provides good-paying jobs with salaries well above the state average that support thousands of American families.”

Is it worth it?
Activists worried all that economic opportunity could come at a high environmental price, and New Mexico regulators could be ill-equipped to address the challenge amid increases in production.

Southeast New Mexico, per NMED data, reported some of the highest ground-level ozone which is caused when volatile organic compounds – often released by oil and gas operations – interact with sunlight.

A Wednesday study from environmental group Earthworks showed the New Mexico Environment Department did not respond to 60 of 108 regulatory complaints filed by the organization in the last three years in response to perceived pollution caused by oil and gas operations in the Permian.

NMED did recently begin issuing multi-million fines to oil and gas companies for air quality violations, with the most recent an about $7 million penalty filed against DCP Midstream and Energy Transfer Partners.

But Earthworks Field Advocate Nathalie Eddy said the recent commitments by New Mexico Gov. Michelle Lujan Grisham and state regulators to crack down on pollution would be impeded by a lack of staffing and resources.

She said the state only had four environmental inspectors for oil and gas facilities in the Permian Basin and lacked a thermographer that could actively seek out sources of pollution in the oilfield.

Earthworks uses forward-looking infrared (FLIR) cameras to create thermal imagining of possible excessive emissions by oil and gas operations that could be invisible to the naked eye.

That could be from leaking storage tanks or malfunctioning flares or valves. Eddy said only nine of the 108 complaints Earthworks filed resulted in emissions reductions.

“Where we go with our cameras is driven by complaints and concerns from communities on the front line,” she said. “New Mexico communities are not protected from health concerns created by oil and gas.”

In total, the state in recent years under Lujan Grisham’s administration issued four letters of possible violations to operators in the Chaco Canyon area in northwest New Mexico and three in southeast region which contains the Permian Basin.

But more work is needed to address the issue, Eddy said, as the basin holds up to 40,000 oil and gas rigs.

“That’s a significant step in the right direction, but a lot more needs to be done,” Eddy said. “A lot of it is because of the volume. The regulator isn’t in the position to address the problem. NMED doesn’t have the resources.

“I think there are some real commitments coming from the governor but how that plays out in the field, a disconnect remains. That disconnect exposes communities to harm on a daily basis.”

The alleged lack of government resources to address pollution put the onus on advocacy groups and local residents to hold the industry accountable, said Nadia Steinzor, manager of Earthworks’ community empowerment project and co-author of the study.

“Earthworks should not have to do the work of regulators in New Mexico,” she said. “NMED and the Oil Conservation Division both need far more resources to oversee the industry and live up to the current Administration's promises.”

Groups act against the rollback of federal emissions rules
Earthworks joined a group of 10 environmental groups in a recent lawsuit against the administration of President Donald Trump, protesting recent changes to the Environmental Protection Agency’s regulation of oil and gas emissions.

The changes were estimated by the groups to result in 3.3 million metric tons of methane pollution each year.

The groups sought judicial review of two changes the EPA made to its rules that would limit the kinds of facilities to be monitored for excess emissions and limit the agency’s ability to directly regulate methane – a major component of extracted natural gas.

“We see right through this appalling effort to hamstring future regulation of the oil and gas industry’s methane pollution,” said Liz Jones, an attorney with the Center for Biological Diversity, a member of the coalition.

“As the world suffers record heatwaves, fires, and storms, the last thing we need is the deregulation of this super-pollutant to make our climate crisis worse."

Sierra Club Staff Attorney Andres Restrepo said the EPA’s rollback of methane regulations was inappropriate amid global warming and climate change and put the profits of the industry ahead of environmental protections.

“With a rapidly warming planet and the most devastating global pandemic in 100 years, the Trump administration has somehow seen fit to worsen both of these crises by attacking safeguards that help reduce greenhouse gas emissions and clean up the air we breathe,” he said.

“We will not stand by as Trump’s EPA guts commonsense, low-cost protection against dangerous oil and gas pollution in order to pad the pockets of oil and gas executives.”

Ryan Flynn, executive director of the New Mexico Oil and Gas Association (NMOGA) said the industry was working to reduce emissions through “market-driven solutions,” and working closely with state regulators.

As currently written, NMOGA estimated the rules would cost operators $4 billion to comply over the first five years, including $3.4 billion in the first year an lead to 4 percent of oil wells and 40 percent of natural gas wells becoming uneconomic.

“New Mexico’s oil and natural gas industry is committed to reducing methane emissions and our comments on the draft rules reflect our ongoing pledge to work collaboratively with New Mexico’s regulatory agencies to achieve a nationally leading gas capture rate of 98% and reduce VOCs and NOx to avoid ozone non-attainment,” Flynn said.