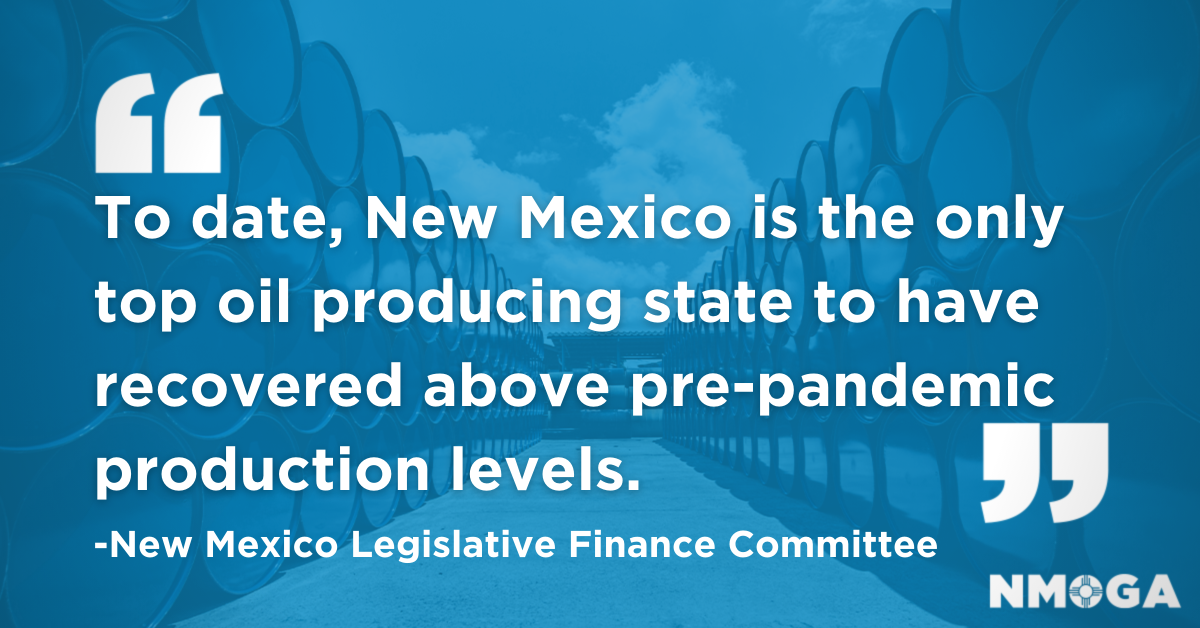 “Global consumption and demand for oil and gas has rebounded from pandemic lows, causing both prices and production in the state to surge as global oil supply catches up,” LFC economists said in their December analysis of estimated recurring state revenue.

From a budgetary perspective, New Mexico has been criticized for its dependence on volatile oil and gas prices.

Drilling and completion activity in the Permian Basin, which extends into southeastern New Mexico, increased in early 2021, LTC economists noted. They said completions continue to exceed the number of newly drilled wells in New Mexico.

LTC stated the bias toward completions means that producers are reducing their inventories of drilled-but-uncompleted (DUC) wells. The committee also observed that New Mexico had 87 active drilling rigs in mid-October, down from a 117-rig peak in March 2020.

“Despite fewer active rigs, the completion of DUC inventories accelerated the state’s total production recovery,” LTD said, adding that the state reached record oil output territory above 1.2 million b/d by April 2021. “To date, New Mexico is the only top oil producing state to have recovered above pre-pandemic production levels.”

New Mexico’s Consensus Revenue Estimating Group (CREG) includes LFC as well as representatives of the state’s departments of Finance and Administration, Taxation and Review, and Transportation.

LFC cautioned, however, that the year/year increase to New Mexico’s general fund from oil and gas revenues will only be 4%. It explained that a five-year average of severance tax and federal royalty collections goes into the general fund. The remainder, which for FY2022 is projected to be $1.5 billion, would be directed to reserves or the state’s early childhood trust fund, the economists added.

New Mexico’s improved severance tax and royalty outlook reflects stronger commodity price projections and production. CREG raised its total preliminary FY2021 average oil price for the state from $49.92/bbl to $50.58. The state’s oil prices averaged $39.34 during the first half of FY2021 but rose to about $60 during the second half of the fiscal year, LFC noted.

The LFC said the differential of New Mexico oil prices below West Texas Intermediate “is estimated at about $2.50/bbl for the forecast period. Prices fell over $10/bbl at the end of November, though current prices are consistent with the December forecast but a reminder that volatility and price collapses will dominate New Mexico’s fiscal outlook.”

What About Natural Gas Projections?

The economists added, however, that natural gas prices fell 15% at the end of November “and pose serious risks to the forecast.”

According to LTC, a $1 change in the annual average New Mexico price of oil translates to a budgetary impact of about $30 million. A 10-cent change in the state’s annual average price of natural gas equates to about $14 million. The economists also said that each additional 1 million bbl of oil generates about $4.3 million in severance taxes and federal royalties. Each additional 10 Bcf of natural gas yields about $3 million.

Earlier this year, New Mexico implemented rules requiring the state’s oil and gas operators to capture 98% of their gas waste by 2026. The state’s operators have also advocated a more proactive stance toward reducing flaring.