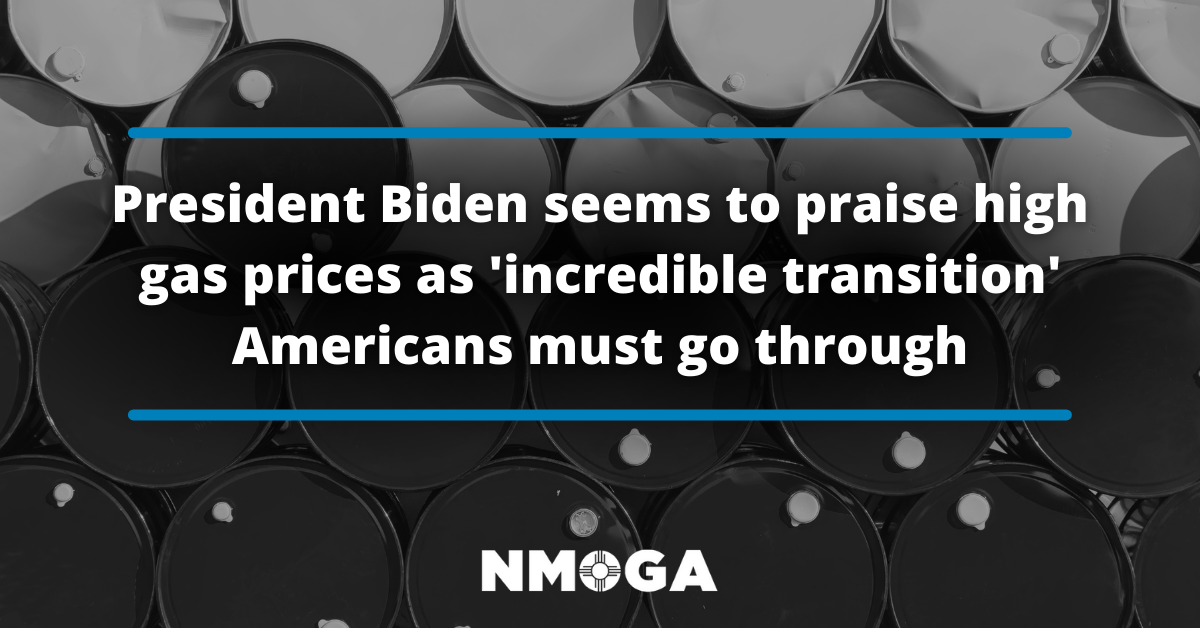 President Biden said that the country is going through an "incredible transition" away from fossil fuels via the high gas prices being experienced nationwide.

Biden made the statement on gas prices during a joint press conference with Japan Prime Minister Fumio Kishida on Monday.

"Here’s the situation. And when it comes to the gas prices, we’re going through an incredible transition that is taking place that, God willing, when it’s over, we’ll be stronger and the world will be stronger and less reliant on fossil fuels when this is over," Biden said, seeming to justify or praise those sky-high prices Americans face at the pump.

Biden's comments come amid a stretch of record-high gas prices which the American Automobile Association says is "unprecedented."

The national average for a gallon of regular gas stands at $4.56 as of Monday, which is more than $.40 higher than it was just a month ago.

In parts of the country such as California, however, the average price for a gallon of regular gas reached $6.06 on Monday.

Biden added during the press conference on Monday that his administration has taken steps to prevent the price at the pump from going even higher, such as the release of 1 million barrels of oil from the U.S. Strategic Petroleum reserve.

"And what I’ve been able to do to keep it from getting even worse — and it’s bad. The price of gas at the pump is something that I told you — you heard me say before — it would be a matter of great discussion at my kitchen table when I was a kid growing up. It’s affecting a lot of families," Biden said.

"But we have released over two hundred and, I think, fifty-seven thousand — million barrels of oil, I should say. Us and the rest of the world we convinced to get involved. It’s helped, but it’s not been enough," he added.

The White House has shifted some of the blame for higher gas prices as a result of Russia's invasion of Ukraine, calling it a "Putin spike at the gas pump."

"Let me first say that Americans are paying a higher price at the pump because of the actions of President Putin," then-White House Press Secretary Jen Psaki told reporters in March. "This is a Putin spike at the gas pump, not one prompted by our sanctions."

Biden's comments on Monday were ridiculed by several Republicans who said that the president is now "saying the quiet part out loud now."

"They’re saying the quiet part out loud now. They’re causing you pain at the pump because it’s all part of their radical agenda," said Rep. Steve Scalise, R-La.

Biden instituted policies some that say are anti-energy during his first hours in office, including canceling the Keystone XL pipeline that would have moved more than 800,000 barrels of crude oil per day from Canada to Texas, and "pausing" oil and gas leases on federal lands. The Biden administration has also canceled multiple federal oil and gas lease sales, some as recently as this month amid the gas price surge.