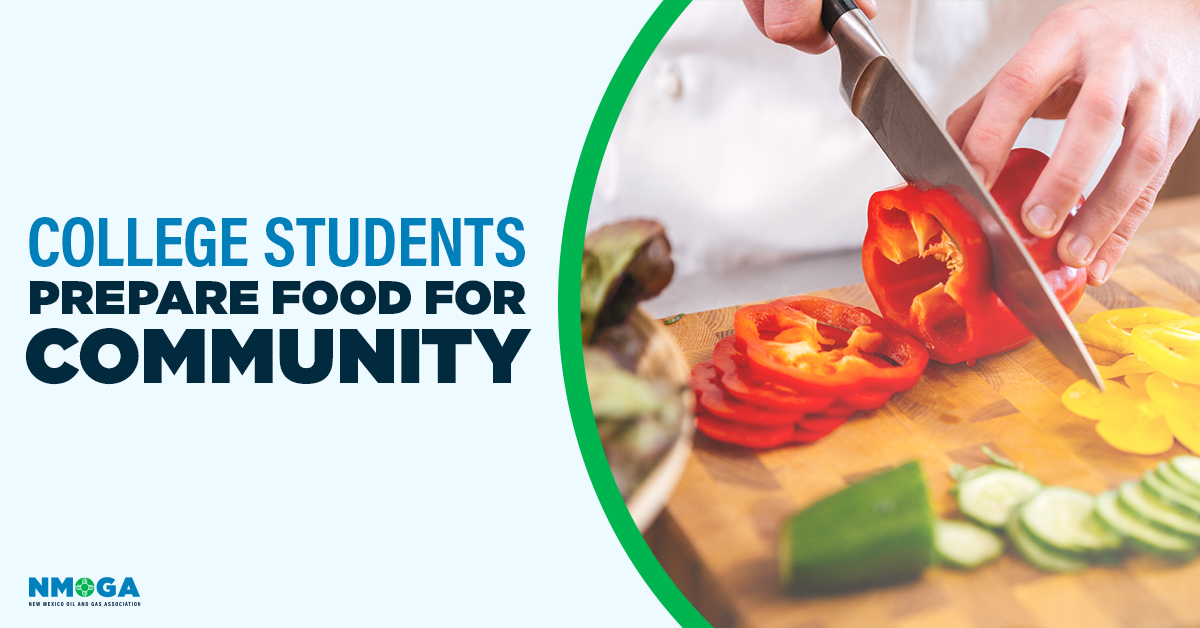 Culinary arts students at Santa Fe Community College are getting a crash course in disaster-relief kitchens.

Their first lesson? Amid a pandemic, chefs must learn to take a single menu item and efficiently scale up production.

“We’ve had some fine dining chefs in here trying to garnish one little leaf. We can’t do that. Make a drizzle instead,” Jerry Dakan, lead instructor for the college’s culinary arts program, said after making 250 gallons of green chile enchilada sauce Wednesday morning.

“There’s a lot of logistics that go into cooking during a disaster. But the most basic is the less steps in a dish, the more we can feed.”

Santa Fe Community College is partnering with World Central Kitchen, a nonprofit focused on disaster-relief cooking, to provide thousands of meals during the coronavirus pandemic, most of which include green chile, calabacitas, posole and other local favorites.

“We’re serving New Mexicans, so we smother pretty much everything,” Dakan said.

In three kitchens on campus, Dakan said, 24 volunteers at a time make around 1,500 meals per day but could produce up to 3,000. During the project, which is in its second of eight weeks, World Central Kitchen is paying for the food while Santa Fe Community College provides the facilities and volunteer labor. Dakan said the kitchen aims to keep food costs at $2 per meal.

In the kitchen, Dakan and four of his culinary arts students are joined by other professors, alumni and chefs from a host of local restaurants, such as Geronimo and Terra at Four Seasons Resort Rancho Encantado.

“There’s still deadlines to get orders out, of course, but it’s a good work environment where we’re working together toward a larger common goal,” said Ambrose Bickett, a Santa Fe High graduate and SFCC culinary arts student volunteering four days a week in the kitchen.

“In a normal situation, customer demands are specific. In this case, we’re just making really good food for a lot of good people who need it.”

Bickett said carne adovada, or pork with red chile, has been his favorite dish the program has prepared so far.

The college is offering drive-up, take-home meals from 2 to 4 p.m. Monday, Wednesday and Friday. The meals are served cold with reheating instructions and are available to anyone, not just students or those involved with the school.

The SFCC kitchen also is providing meals to food trucks destined for rural areas, public schools, Boys & Girls Clubs of Santa Fe, YouthWorks and pueblos while working with the city of Santa Fe and Santa Fe County to identify additional areas of need.

While greenhouses on campus grow lettuce, cherry tomatoes and other produce, Dakan said the project is partnering with local farmers to bring in cheese from Tucumcari and wild boar from Santa Fe County.

Dakan said the pandemic is highlighting critical deficiencies in the state’s food infrastructure, citing flour grown on the Navajo Nation being milled in Colorado and a lack of slaughterhouses, which is forcing the vast majority of meat raised in New Mexico to be processed in Texas, Colorado or Arizona.

“In so many ways, it’s not profitable to be a rancher in New Mexico these days. We need to invest in agriculture. Unlike oil and gas, it’s sustainable,” Dakan said. “National food distribution companies aren’t always going to respond to local demand or support local farmers, but we’re showing we can do that ourselves.”