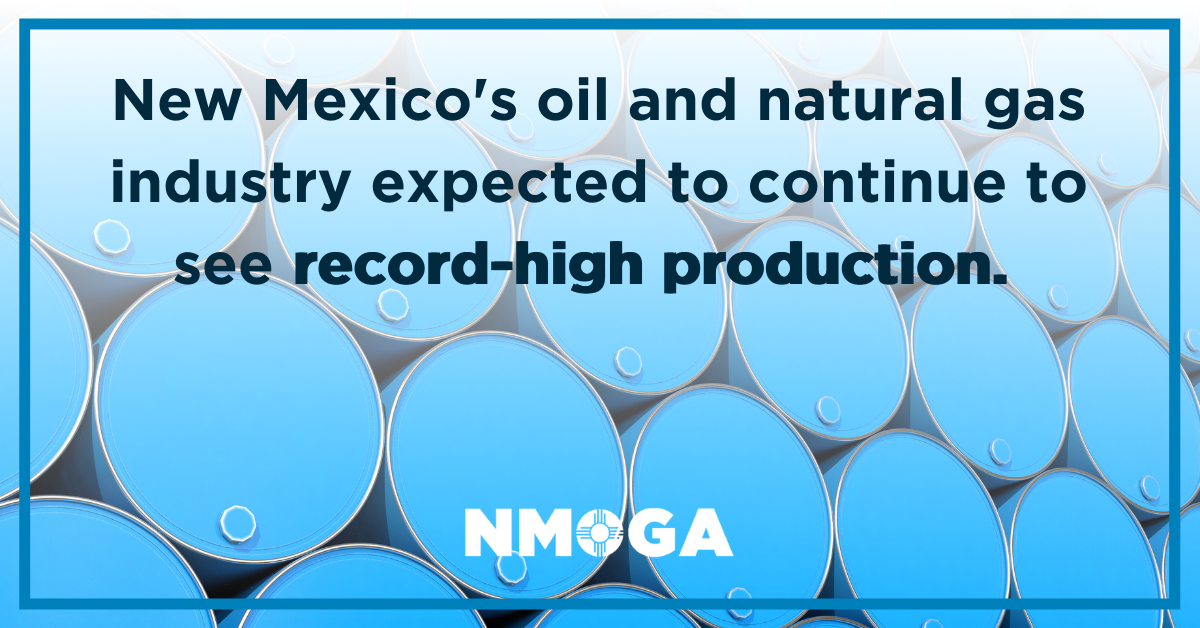 Southeast New Mexico’s shale-based oil geyser is still pumping crude at record levels, pushing output to a new production milestone in 2021, with prospects for a lot more to come.

The state produced a record 442.7 million barrels last year – up 18% from 2020 – and most industry experts now expect New Mexico’s spigots to pump out half a billion barrels this year.

“New Mexico continues to benefit from record-high production, with more coming as we go into the summer,” said New Mexico Oil and Gas spokesman Robert McEntyre. “We don’t offer projections, but with the rig count rising, it’s certainly safe to say 500 million barrels is absolutely within reach this year.”

That represents a phenomenal, prolonged boom in the Permian Basin, where the shale oil revolution has raised state production by three-fold since 2016, elevating New Mexico to the second largest producer in the U.S. after Texas.

The steady increase reflects extraordinary geology in the Permian, particularly on New Mexico’s side of the basin in Lea and Eddy counties, where modern technology has allowed producers to crack open layers of hard shale rock to tap into huge reservoirs of trapped crude. Once penetrated, oil from those Permian wells gushes out in spurts of productivity that far surpass virtually any other basin in the U.S. or other countries.

Those geysers, combined with today’s skyrocketing oil prices, are now flooding state coffers with unprecedented revenue. And the boom times are likely here to stay, at least for the next few years, given the vast shale-based reservoirs yet to be tapped in southeastern New Mexico and West Texas, said Raoul LeBlanc, vice president for nonconventional oil and gas at IHS Markit, a global energy consultant.

“The Permian Basin remains the best place to drill in the U.S. in terms of profitability,” LeBlanc told the Journal. “Plays in other basins will likely grow given today’s prices, but we believe the Permian Basin will remain the primary growth place for the country going forward.”

That will continue even when prices eventually decline, because the Permian’s shale-based gushers allow producers to earn returns at much lower levels than at today’s nearly $100-per-barrel price, LeBlanc added. Even at $25 per barrel, which producers faced throughout much of the pandemic, IHS Markit estimates that more than 10% of prime shale reservoirs in the Permian and other U.S. basins – or about 2,000 potential wells – would still remain profitable.

With prices now hovering at $100 per barrel, industry experts are particularly bullish on the short-term outlook in New Mexico’s oil patch, especially since prices are unlikely to decline much in the near term. Uncertainty over worldwide oil and gas supplies reigns because of the war in Ukraine, plus the erratic ups and downs in economic recovery from the coronavirus.

The pandemic led to massive market oversupply in 2020 as economies locked down and global consumer demand for oil contracted by about 20%. Prices fell to record lows that year, with production, in turn, plummeting nearly overnight in most countries.

In the U.S., total domestic output fell from about 13 million barrels per day before the pandemic to about 11 million by mid-2020, according to the U.S. Energy Information Administration.

But as global vaccination campaigns gained momentum in early 2021 and economies began to reopen, consumer demand has ramped back up much faster than production. That created a steady rebound in prices that pushed oil into the $90-per-barrel range by late last year – the highest market price in a decade, up from about $65 per barrel before the pandemic.

And now, following the Russian invasion in Ukraine, prices are fluctuating wildly, given the uncertainty over continued oil exports from Russia, which accounts for about 10% of global supplies. Russian oil continues to flow into Europe, but both the U.S. and the United Kingdom have banned Russian imports. That briefly drove crude prices to a new 15-year high above $130 per barrel in early March, with U.S. gasoline prices climbing to a record of over $4.20 per gallon.

“We had expected prices to remain at $70 to $80 this year,” Ramos-Peon told the Journal. “Now, the most likely situation in our view is for prices to fluctuate between $90 and $120 per barrel for the remainder of 2022.”

IHS Markit expects high prices to continue well into 2023 and beyond.

“We expect prices to remain close to $100 over the next several years,” LeBlanc told the Journal.

At today’s prices, production in New Mexico and elsewhere will likely accelerate going forward. Total U.S. output, for example, is expected to return to the pre-pandemic level of about 13 million barrels per day by the end of 2022.

In New Mexico – where the number of active drilling rigs fell from a high of 117 before the pandemic to just 41 in mid-2020 – the rig count had climbed back to 98 as of mid-March.

“We expect the rig count to climb above 100 this summer,” said McEntyre of the NM Oil and Gas Association. “That’s still shy of the 117 peak we reached before the pandemic, but it’s a positive indication of production growth.”

“Things are bustling,” Scott told the Journal. “The airport has a 900-vehicle parking facility. Most days now it’s usually about half full with a lot of people coming and going, which generally translates into a fairly reasonable level of industry activity.”

In fact, unlike other basins around the country, oil production continued growing in New Mexico’s oil patch even at the height of the pandemic, albeit at a much slower pace than before the coronavirus downturn. That’s largely because producers had already drilled a lot of new wells before the pandemic hit, allowing crude to continue flowing from those operations as industry activity crashed in 2020.

And even then, many companies continued drilling wells during the pandemic without actually completing them to wait for prices to rebound. When that happened in 2021, operators then opened up those newly drilled wells for production, allowing output to rapidly increase again last year.

In addition, companies are now sucking a lot more oil out of each drilled well, thanks to technology improvements.

The shale revolution initially began as a result of modern fracking and drilling techniques that permit producers to grind down vertically into multilayered shale beds at different levels below the surface, and then drill horizontally into oil reservoirs trapped in the rock. But in the last couple of years, operators have greatly extended their horizontal drilling ability to reach up to two and three lateral miles into the shale beds, far surpassing the 1-mile length typical in the early days of shale production. That allows producers to recover a lot more crude from a single well.

And given the multiple layers of shale on New Mexico’s side of the Permian, producers have a lot of future inventory yet to drill into, extending the potential life of the oil patch for many years.

“I’d say they’ve only just scratched the surface at this point,” Scott said.

In that regard, the Permian offers a lot more promise than other shale basins, many of which have either already exhausted, or are close to depleting, their most lucrative locations, according to a recent analysis by the Wall Street Journal.

That’s not the case in the Permian, LeBlanc of IHS Markit said.

“In the Permian, producers aren’t running out of locations – just the best-of-the-best spots,” LeBlanc said. “And for every best location, there are still five more prime drilling spots in slightly less-advantageous acreage to drill into.”

“It’s not like the early shale years when producers had to wait 18 months to two years to hope for a return on their capital investment depending on price,” Miller told the Journal. “I recently toured one new well drilled by a large company that estimated a 100% return on capital in just 75 days of production, both because of the high price and excellent quality of the well.”

Still, while Permian geology offers yearslong production potential, the pace of growth going forward will remain significantly slower than before the pandemic.

That reflects a number of challenges, beginning with supply-chain problems and labor constraints as the coronavirus recedes and the world economy fully rebounds. Like most industries, oil companies face supply shortages across the board, from equipment and spare parts to raw materials like steel.

“You can’t get a new crew or a truck driver,” LeBlanc said. “You practically need to bribe people to come back.”

Inflation as well is raising costs for everything.

“Pricing for supplies and services are increasing quickly,” Ramos-Peon said. “We expect costs in general to rise by 15% to 20% by 2023.”

But even without those challenges, the Permian will likely never return to the unbridled, “drill, baby, drill” expansion that ran rampant in pre-pandemic years. Producers now face immense pressure to focus on profitability over rapid growth, reflecting investor demand for companies to provide significant returns rather than pump most profits back into production as they did before.

The industry also wants to avoid a massive surge in shale-oil output that could undercut prices.

And climate change hangs over everything. With record oil and gas prices pounding the economy, pressure is mounting to accelerate the transition from fossil fuels to renewables, both to combat climate change and to strengthen the nation’s energy independence and security.