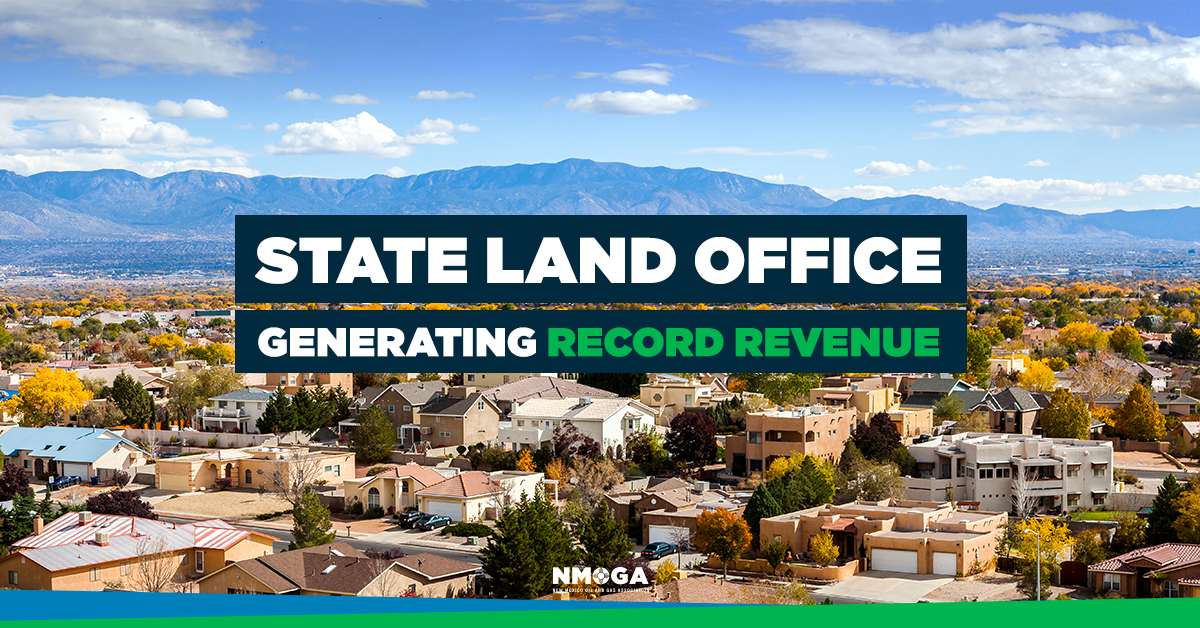 New Mexico is raking in record revenue hand over fist from activities on state-owned lands.

The State Land Office collected $852 million from leases, royalties and other payments in fiscal year 2018, a 28% increase from FY 2017 and the highest amount ever recorded, according to a new report from the economic advocacy group New Mexicans for Economic Prosperity.

About 93% of revenue is coming from lease sales and royalties on oil and gas operations, reflecting the unprecedented boom underway on New Mexico’s side of the Permian Basin in Lea, Eddy and Chaves counties.

But revenue is up as well from most other activities on state lands, including grazing and farming, non-oil-and-gas mineral mining, outdoor recreation, and, more recently, renewable energy development.

“The oil and gas boom in the Permian Basin is a big part of the record revenue flowing in,” Garcia Richard told the Journal. “The Permian is the best producing basin in North America, and possibly the world, especially in two key formations (in New Mexico) – the Wolf Camp and Bone Spring. They’re incredibly lucrative.”

The Land Office, however, is now prioritizing efforts to diversify state land use, particularly emphasizing outdoor recreation and development of renewable resources such as wind and solar generation, which could significantly increase revenue in coming years.

Garcia Richard created an entirely new Office of Renewable Energy after taking over the office in January. A new $100,000 legislative appropriation this year will allow the office to hire a renewable energy manager.

As of the end of FY 2018, the Land Office was processing 15 new applications for renewable energy projects on state lands, according to the advocacy group’s report. And many more have been streaming in since then, especially given the state’s new Energy Transition Act, which requires public utilities to derive 50% of their electricity from renewable resources by 2030, 80% by 2040, and 100% carbon-free generation by 2045.

“Wind and solar producers and transmission-line development folks are beating down our doors to develop projects,” Garcia Richard said. “We’ve created an entirely new office with the sole mission to aggressively recruit renewable energy projects. Our state lands are ideal for wind farms, and we’re working with transmission developers to build the infrastructure needed to transmit all that new renewable energy.”

Renewable energy activities brought in about $937,000 in revenue in FY 2018, or just 0.1% of total Land Office proceeds last year, according to the report. But it’s an increase from the previous year, and nearly double the renewable energy-related revenue reported in FY 2015.

About 475,000 acres of state trust land is suitable for wind development based on average wind speed and elevation, according to the advocacy group. That could support about 3,700 wind turbines, or enough to generate nearly $28 million in annual revenue.

Elephant in the room

Still, oil and gas remains, by far, the elephant in the room. Those operations generated $792 million in revenue last year.

And as the boom continues, there’s a lot more trust acreage to lease. The state controls about 46% of the mineral estate acreage in Lea County, 26% in Eddy, and 21% in Chaves. Together, that totals about 2.9 million acres in mineral estate that the Land Office manages in those three places, according to the report.

The Land Office’s monthly oil and gas lease sale in February raked in more than $35 million, including the largest-ever bid of $12 million for one open lease covering 8,920 acres in Lea, Eddy and Chaves counties. That was double the previous bid record for an open lease, and it broke the Land Office’s online record-keeping system, Garcia Richard said.

“We had to redesign the IT system that records it all,” she said. “It wasn’t compatible with the amount given for the lease payment. We had to add a ‘zero.’ ”

Non-oil-and-gas mining and minerals came in a distant second in revenue generation, generating $18 million last year. Still, that’s about double the revenue earned in FY 2017, according to NM4EP.

Agriculture, including livestock grazing and cropland production, came in third at $11.2 million in FY 2018. Outdoor recreation trailed with $1.5 million, followed by renewable energy.

Those funds in turn send the proceeds onto state government to finance beneficiary programs. About 85% is used for public schools.

Financing from those funds saved the average New Mexico household about $1,100 in taxes last year, according to the advocacy group, NM4EP.

“The economic activities that take place on our state trust lands are an important source of jobs in multiple industries, from agriculture and energy to mining and outdoor recreation,” said NM4EP executive director Kyler Nerison. “They also generate hundreds of millions of dollars every year for education and health care across New Mexico.”