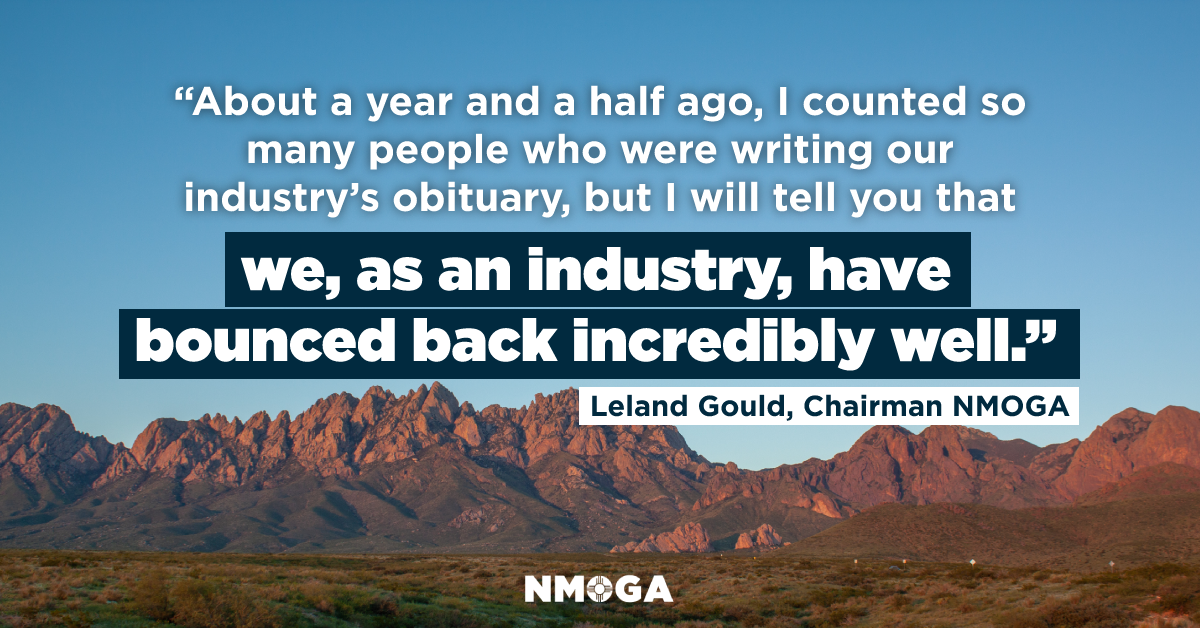 New Mexico’s oil and gas industry has recovered in many ways during the past year, but an industry leader says state and federal regulatory and legislative efforts to restrict emissions and industry activity on public lands continue to present challenges.

Leland Gould, chairman of the New Mexico Oil and Gas Association, gave an update on the industry to people attending the Friday virtual meeting of the Southeast New Mexico Economic Development District/Council of Governments Board of Directors.

Part of the the Economic Development District’s efforts include developing a post-pandemic economic recovery plan for the area, as well as long-term economic development strategies.

“About a year and a half ago, I counted so many people who were writing our industry’s obituary,” Gould said. “But I will tell you that we, as an industry, have bounced back incredibly well.”

For the 2021 fiscal year ended June 30, the industry had contributed $2.8 billion to the state’s operating budget, which represents about 35% of all revenues for New Mexico.

About half of those revenues — $1.4 billion — will be used to fund public education. That amount provided by taxes does not include the royalty payments that go into the New Mexico Land Grant Permanent Fund, which also funds public K-12 schools, public universities, specialty schools, hospitals and some other entities.

Chaves County will receive $41 million from the industry for public education, while southeast New Mexico will receive about $164 million for education.

“That is a huge number,” Gould said about the state total for education, “and it is also a difficult number to replace.”

He said that the industry supports 134,000 direct and indirect jobs, which is a reduction from pre-pandemic levels, as most of the industry cut employees and reduced capital investments significantly to survive in 2020.

The rig count in New Mexico has decreased to 76, compared to 117 before the coronavirus pandemic hit the area in March 2020. But those 76 rigs have produced “record numbers” for New Mexico. Gould credited that to the fact that the Permian Basin is recognized worldwide by the industry as a good place for investment.

Now the industry anticipates “hurdles” from the federal government as the Interior Department and other agencies work to enact a series of initiatives intended to reduce fossil fuel emissions and mitigate the harmful effects of climate change.

One of those initiatives is an executive order that places a moratorium on new drilling activity on federal lands, which has a big impact on New Mexico, given that the federal government owns 27 million acres in the state. Gould said that 54% of New Mexico oil and gas revenues are generated by activity on federally-owned parcels.

A U.S. District Court judge in Louisiana decided in mid-June in favor of the oil industry and government officials in 13 states by granting a temporary injunction on the federal moratorium, which Gould said was a “blessed” decision for New Mexico.

A ban of industry activity on federal lands could mean a loss in New Mexico of $1.5 billion in revenues and $12 billion in capital projects and 36,000 jobs by 2024, Gould said.

He said other hurdles for the industry come from proposed state legislation that would restrict the industry, state government actions regarding emissions, lawsuits by environmental groups fighting oil and gas leases on public lands, and other federal actions seeking to preserve endangered wildlife and plants or their habitat, which could mean a restriction of oil and gas activity. He encouraged Economic Development District members to talk to their state legislators about supporting the industry.

The Biden Administration, some state officials and environmental groups have argued that the federal lands moratorium only affected new leases, which would not diminish any existing oil and gas activity, and that the nation must take more steps to reduce methane emissions and other fossil fuel pollutants to fight climate change and safeguard public health.