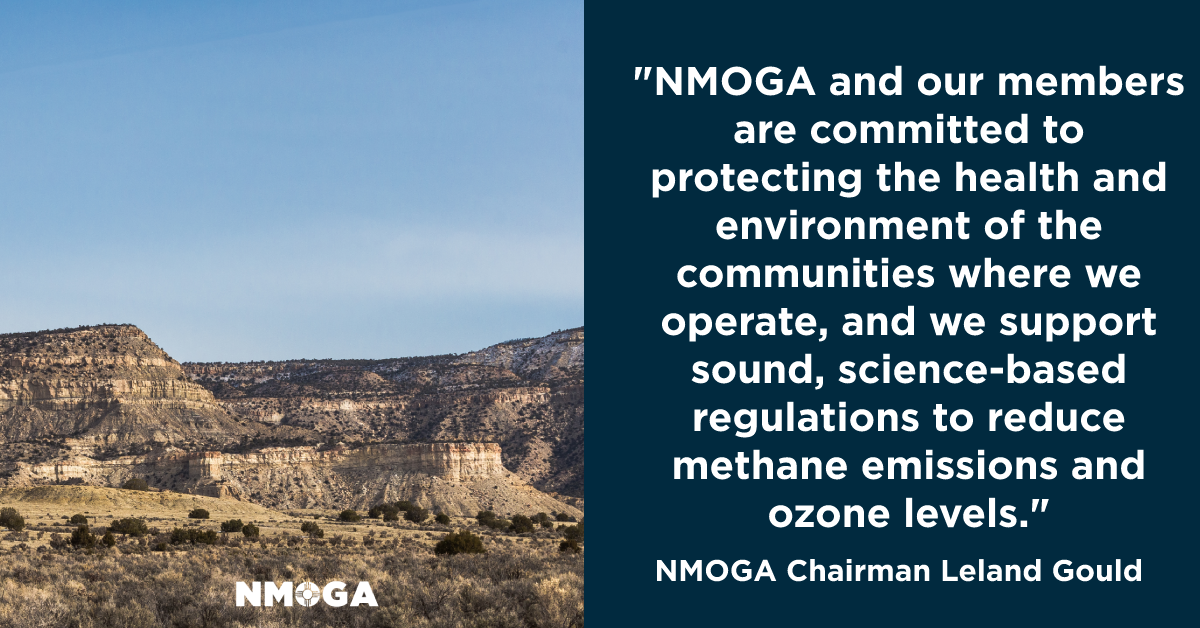 New Mexico's air will be cleaner and free of more ozone — equivalent to taking 8 million cars off the road, according to some estimates — if new requirements from the state's Environment Department go into effect next year.

The NMED on Thursday announced it was removing exemptions from its proposed ozone rules for low-performing or stripper wells after calls from environmental groups that such “loopholes” would exempt most oil and gas wells in New Mexico.

The rules required operators conduct leak detection at least monthly and repair most leaks within 15 days while maintaining records of compliance.

Operators must also report all emissions from their facilities, and have them certified by a professional engineer

NMED also planned to increase its monitoring of oil and gas emissions, using new tactics such as flyovers via aircraft of oil and gas sites, monitoring from ground vehicles and the use of forward-looking infrared (FLIR) cameras.

The rules were filed by NMED to the New Mexico Environment Improvement Board which will vote on adopting the rules later this fall.

NMED Cabinet Secretary James Kenney said he expected the rules would go into effect in spring 2022.

It's important to NMED to address ozone pollution, Kenney said, for the sake of public health and the environment. The process to do so began in 2019 in response to an executive order from Gov. Michelle Lujan Grisham that state departments find ways to reduce greenhouse gas emissions and impacts on climate change.

The department’s rules were meant as a companion to regulations enacted earlier this year by the Oil Conservation Division — an arm of the Energy, Minerals and Natural Resources Department — focusing on the waste of methane and volatile organic compounds (VOCs) like benzene, known as precursors to ozone, by oil and gas operators through leaks and other emissions.

Ozone is formed when air pollutants like methane or VOCs interact with sunlight.

Carlsbad and Hobbs in southeast New Mexico and areas in northwest region of the state — both known for heavy oil and gas activities — have elevated ozone levels. Carlsbad had 79 parts per billion (ppb) while Hobbs had 71 ppb based on a three-year average.

The areas where the rules would apply incorporate about 38 percent of the state’s population, per NMED.

'A sunburn on your lungs'

COVID-19 brought a deeper focus on respiratory illnesses which ozone can cause, Kenney said, but the rulemaking process was underway well before the health crisis and was in response, he said, to desires both from the industry and environmentalists and as part of NMED’s legal mandate.

“Ozone is effectively like getting a sunburn in your lungs. It diminishes your ability to breathe,” Kenney said. “It’s really important for us to be focusing on that for all of New Mexico, even when there’s not a public health crisis. But with the COVID-19 health crisis there’s a lot of focus on respiratory issues. It’s important New Mexicans have clean air to breathe.”

In enacted, Kenney said the rules would prevent up to 260 million pounds of pollutants from the air, mostly VOCs and oxides of nitrogen — both primary ingredients in ozone.

That’s the equivalent of taking 8 million cars off the road, Kenney said.

He said the rules would reduce 851 million pounds of methane pollution per year — enough to power 1.2 million homes in New Mexico annually.

“We all know methane is a very powerful greenhouse gas,” Kenney said. “That fits with our climate agenda as well. We’re really proud our rule will have that benefit.”

He also touted support from the oil and gas industry, estimating about 90 percent of operators supported the rulemaking process which would “level the playing field,” Kenney said.

“We couldn’t have written this rule without industry involvement. Most of the industry in New Mexico recognizes that moving toward better air quality and keeping their product in the pipeline and selling it is a benefit to everyone,” he said. “Even when we’ve had disagreements, we’ve worked through them.”

Removing the controversial exemptions for low-performing wells, he said, was done after receiving feedback from all stakeholders and addressing how much bigger a reduction in pollution such actions would cause.

“We looked at the ozone reductions we could get out of that,” Kenney said. “We felt that that was the right thing to do to remove those exemptions and require those requirements at those wells.”

Sandra Ely, director of NMED’s Environmental Protection Division said industry input was essential to the process, and energy companies would continue to have influence on the rulemaking as the final draft goes before the EIB and could be adjusted before going into effect.

The rules were created using the State’s Methane Advisory Panel, which included industry representatives, activist groups and other organizations.

“It’s a very important and vital input. Getting their input is key. They’re on the ground, they’re operating in the field,” Ely said of oil and gas companies. “They gave us very valuable and honest feedback and we look forward to that continuing throughout the rulemaking.”

If enacted, the new rules would take effect immediately, Kenney said, a contrast with EMNRD’s rules that took a more phased approach toward attaining that department’s goal of 98 percent gas capture by 2026.

Operators found to be out of compliance could be served a notice of violation, a court order for compliance or civil penalties.

“We can’t wait for our ozone levels to get worse,” Kenney said “We have to act on ensuring compliance.”

Lujan Grisham said the rules will benefit New Mexico by holding the industry to account for its pollution and encouraging companies to develop and adapt new technologies to curb emissions.

“Today, New Mexicans can breathe easier knowing that present and future generations will have cleaner air,” Lujan Grisham said. “This rule will not only hold industry accountable, but will also spur innovation and greener practices in the oil and gas fields."

Leland Gould, chairman of the New Mexico Oil and Gas Association said the new rules were the result of collaboration between the industry, government and other stakeholders.

He said the association and its member companies understood the need for "responsible" oil and gas production and environmental regulations if done with market needs in mind.

“NMOGA and our members are committed to protecting the health and environment of the communities where we operate, and we support sound, science-based regulations to reduce methane emissions and ozone levels," Gould said.

"Throughout this two-year process, we have been dedicated to working with regulatory bodies to share our industry’s scientific and environmental subject matter expertise."

He said industry leaders will continue analyzing the rules and working with the state to ensure the policies ensure environmental protection but also allow companies to adjust operations in "cost effective" ways.

"New Mexico should be a leader in responsible energy development, and an appropriate regulatory framework will allow oil and natural gas to continue to deliver enormous fiscal and economic benefits to all New Mexicans while reducing emissions, safeguarding natural resources, and improving our environment," Gould said.

She said the stricter regulations would benefit local communities near oil and gas developments.

“Swift and bold action on a strong final rule is necessary to rein in dangerous oil and gas pollution that puts community health and our climate at risk," Eddy said. "For too long, oil and gas operators have been allowed to pollute day in and day out. New Mexico frontline communities see, smell and feel the impacts on a daily basis.”