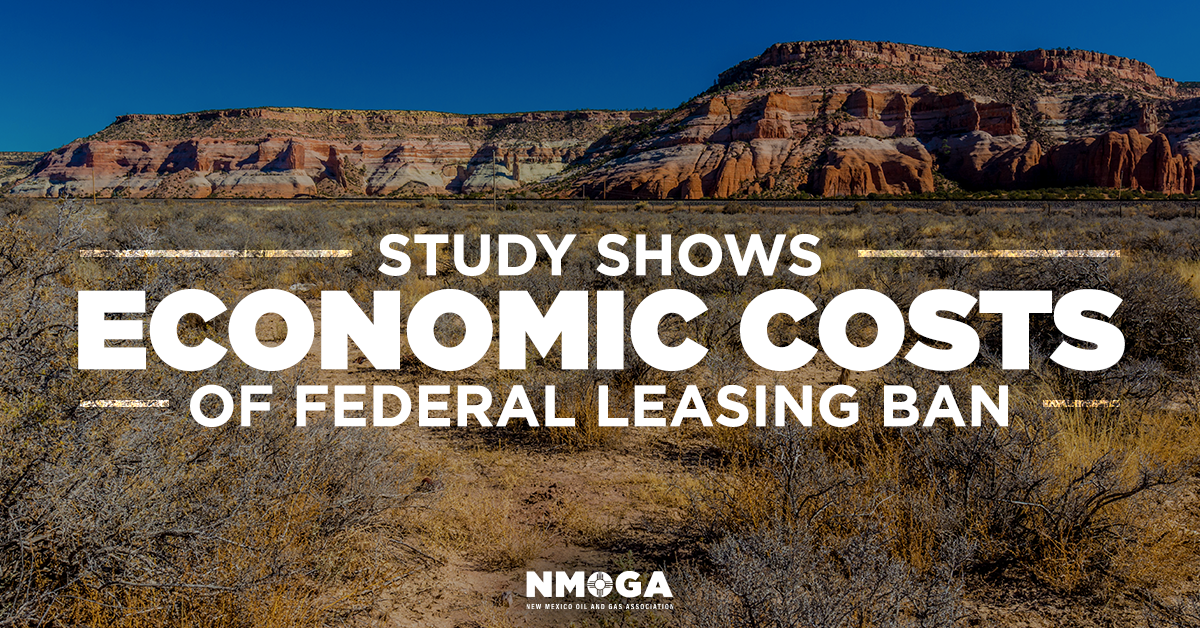 A new study from the School of Energy Resources at the University of Wyoming lays out how a ban on hydraulic fracturing (“fracking”) on federal lands would lead to “significant fiscal and economic losses” in New Mexico through 2040.

The Fiscal and Economic Impacts of Federal Onshore Oil and Gas Lease Moratorium and Drilling Ban Policies, commissioned by the Western Energy Alliance and the New Mexico Oil and Gas Association (NMOGA) and released in December 2020, shows how the Land of Enchantment would suffer under both a moratorium on new leasing ventures and an outright ban on fracking altogether, which President-elect Joe Biden has pledged to impose.

“Based upon…investment and production forecasts, a federal leasing ban would result in a $2.107 billion reduction in oil and gas investment [in New Mexico] during the first year,” the study notes. “These losses in investment spending escalate to $3 billion by 2025….A leasing moratorium reduces annual oil and gas tax revenues by $1.2 billion in 2025.”

“Under a drilling ban,” the study continues, “the losses in oil and gas investment and production are substantially larger, reaching $3.2 billion of lost investment during 2025 and $4.1 and $974 million in lost oil and gas production. As a result, oil and gas tax revenues are significantly lower with losses of $1.17 billion in 2021 and $1.35 billion in 2025. If a drilling ban were to remain in effect, New Mexico would suffer significant tax revenue losses over time, averaging $1.87 billion in annual losses during 2026 to 2030. Annual tax revenue losses would be $2.7 billion during the 2031 to 2035 period and rise to $3.8 billion from 2036 to 2040. The cumulative loss under a lease moratorium is $45 billion and this rises to $48 billion under a drilling ban.”

“Our state depends on oil and gas to fund schools, put teachers in classrooms and help our young children learn,” said NMOGA President Ryan Flynn in a statement to coincide with the release of the study. “With vast stretches of federal land, it is simply impossible to divorce our economic success from land management policy in western states like New Mexico, and funding for education, access to healthcare, and new infrastructure projects are all on the line. We are committed to doing our part to reduce emissions and protect the environment, but we cannot slap thousands of New Mexicans with proposals that destroy jobs and ravage communities.”

This is not the only study to demonstrate what could happen to New Mexico if a fracking ban went into place. A 2019 study from the Global Energy Institute at the U.S. Chamber of Commerce finds a total ban on fracking in New Mexico would result in the loss of 142,000 jobs across the state by 2025, or 15.8 percent of the state’s total workforce. “To put this potential loss in perspective,” the report notes, “more jobs supported by the oil and natural gas industry would be lost in the first year of a hydraulic fracturing ban than the total number of jobs that all New Mexico industries created in the last year.”

Beyond the destruction of so many jobs, the ban would result in a $26 billion loss in household income, at the tune of $10,723 per household by 2025. Further, $86 billion in cumulative state gross domestic product would be lost, as well as $8 billion in state and local tax revenues.

“If a hydraulic fracturing ban were enacted,” the report concludes, “27,000 jobs would be lost, $7 billion in economic activity would be eliminated, household income would drop by $2 billion, and $681 million in state and local tax revenues would be lost in New Mexico—in the first year alone.”

A 2020 report from the American Petroleum Institute (API), with modeling data provided by the consulting firm OnLocation, has unemployment numbers in New Mexico due to a federal fracking ban that mirror GEI’s study, with 149,000 lost jobs in 2022 alone.

The development of shale reserves in New Mexico has turned the state into the eighth-largest producer of natural gas in the United States, as well as the third-largest producer of crude oil. This massive increase in domestic shale development, led by fracking, has caused natural gas prices to plummet in New Mexico, saving state residents and businesses more than $3.4 billion from 2006 to 2016, according to a 2018 study from the Consumer Energy Alliance.

“Overall,” the study concludes, “either a moratorium on new federal leases or an outright drilling ban would constitute a significant investment and production shock to the economy of New Mexico, reducing tax revenues, income, and employment. Moreover, these policies deprive New Mexico from developing its abundant oil and gas resources in the Permian Basin.”

Hydraulic fracturing enables the cost-effective extraction of once-inaccessible oil and natural gas deposits. These energy sources are abundant, inexpensive, environmentally safe, and can ensure the United States is the world’s largest energy producer well beyond the 21st century. Therefore, New Mexico policymakers should refrain from placing unnecessary burdens on the natural gas and oil industries, which are safe and positively impact the New Mexico economy, and urge their federal colleagues in Washington, DC to do likewise.

The Fiscal and Economic Impacts of Federal Onshore Oil and Gas Lease Moratorium and Drilling Ban Policies
https://www.wyoenergy.org/wp-content/uploads/2020/12/Final-Report-Federal-Leasing-Drilling-Ban-Policies-121420.pdf
This report from the School of Energy Resources at the University of Wyoming demonstrates how a fracking ban or leasing moratorium on federal lands like the one advocated by the Biden presidential campaign would severely harm the economies of eight western states.

The Economic Benefits of Hydraulic Fracturing to New Mexico – and the Consequences of a Potential Ban
https://www.globalenergyinstitute.org/sites/default/files/2019-12/the_economic_benefits_of_hydraulic_fracturing_to_new_mexico.pdf
This report from the Global Energy Institute at the U.S. Chamber of Commerce notes how historic levels of oil and natural gas production in New Mexico – made possible by advancements and improvements in hydraulic fracturing technology – have resulted in new job creation, economic growth, and increases in personal income that are leading the nation. It highlights both the benefits of the shale energy revolution and the real-world impacts that a ban would have on New Mexico.

Energy for New Mexico
https://consumerenergyalliance.org/cms/wp-content/uploads/2018/10/CEA-NM-Report-FINAL.pdf
This report from the Consumer Energy Alliance examined how the shale revolution across New Mexico has provided benefits to residents of the Land of Enchantment by boosting disposable income, revitalizing communities, and saving residential users $1.6 billion and commercial and industrial users $1.86 billion from 2006 to 2016.

America’s Progress at Risk: An Economic Analysis of a Ban on Fracking and Federal Leasing for Natural Gas and Oil Development
https://www.api.org/~/media/Files/Oil-and-Natural-Gas/Hydraulic-Fracturing/2020/fracking-ban-study-americas-progress-at-risk.pdf
The study from the American Petroleum Institute (conducted by economic modeling firm OnLocation)  warns that banning federal leasing and fracking on public and private lands, which some presidential candidates have proposed, would cost up to 7.5 million American jobs in 2022 alone, lead to a cumulative GDP loss of $7.1 trillion by 2030, slash household incomes by $5,400 annually, increase household energy costs by more than $600 per year and reduce farm incomes by 43 percent due to higher energy costs. If a ban is enacted, the U.S. would flip from being a net exporter of oil and petroleum products to importing more than 40 percent of supplies by 2030.

Debunking Four Persistent Myths about Hydraulic Fracturing
https://www.heartland.org/publications-resources/publications/debunking-four-persistent-myths-about-hydraulic-fracturing
This Heartland Institute Policy Brief by Policy Analyst Timothy Benson and former Heartland communications intern Linnea Lueken outlines the basic elements of the fracking process and then refutes the four most widespread fracking myths, providing lawmakers and the public with the research and data they need to make informed decisions about hydraulic fracturing.

The U.S. Leads the World in Clean Air: The Case for Environmental Optimism
https://files.texaspolicy.com/uploads/2018/11/27165514/2018-11-RR-US-Leads-the-World-in-Clean-Air-ACEE-White.pdf
This paper from the Texas Public Policy Foundation examines how the United States achieved robust economic growth while dramatically reducing emissions of air pollutants. The paper states that these achievements should be celebrated as a public policy success story, but instead the prevailing narrative among political and environmental leaders is one of environmental decline that can only be reversed with a more stringent regulatory approach. Instead, the paper urges for the data to be considered and applied to the narrative.

Climate Change Reconsidered II: Fossil Fuels – Summary for Policymakers
https://www.heartland.org/publications-resources/publications/climate-change-reconsidered-ii-fossil-fuels---summary-for-policymakers
In this fifth volume of the Climate Change Reconsidered series, 117 scientists, economists, and other experts assess the costs and benefits of the use of fossil fuels by reviewing scientific and economic literature on organic chemistry, climate science, public health, economic history, human security, and theoretical studies based on integrated assessment models (IAMs) and cost-benefit analysis (CBA).

The Social Benefits of Fossil Fuels
https://www.heartland.org/publications-resources/publications/the-social-benefits-of-fossil-fuels
This Heartland Policy Brief by Joseph Bast and Peter Ferrara documents the many benefits from the historic and still ongoing use of fossil fuels. Fossil fuels are lifting billions of people out of poverty, reducing all the negative effects of poverty on human health, and vastly improving human well-being and safety by powering labor-saving and life-protecting technologies, such as air conditioning, modern medicine, and cars and trucks. They are dramatically increasing the quantity of food humans produce and improving the reliability of the food supply, directly benefiting human health. Further, fossil fuel emissions are possibly contributing to a “Greening of the Earth,” benefiting all the plants and wildlife on the planet.